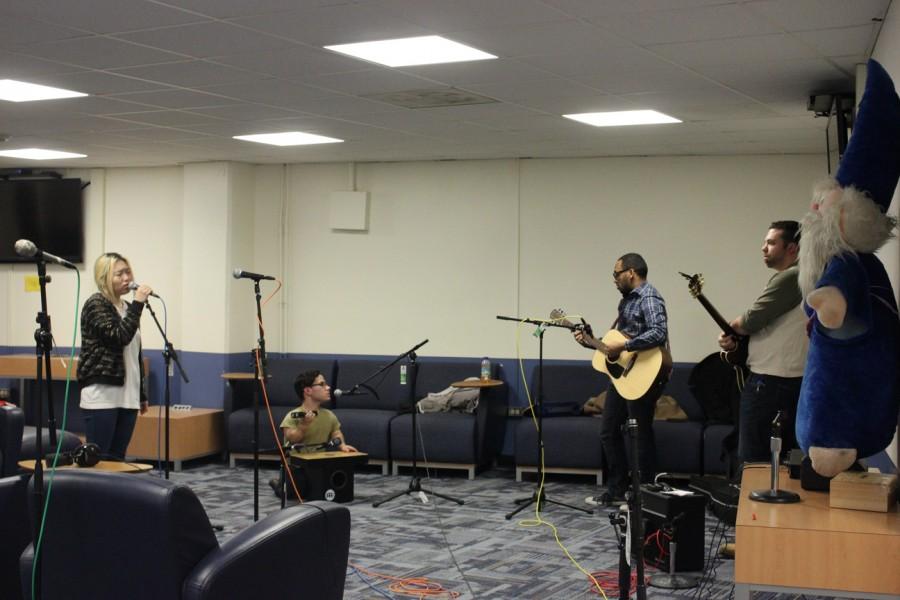 The new faces at the WZRD Thursday Night Live performance were members of the indie alternative rock group Pharaon. Welcoming their new vocalist in the band, Yingduo Liu (or Louise, alternatively), the group headed on with a set list that echoed into the sound waves of the college radio.

When the band formed in the summer of 2012 with Robert Daniels, the rhythmist and songwriter and other band members, the group remained close to their indie rock roots, taking great influence from the likes of Bob Dylan, Smashing Pumpkins, Radiohead and Queens of the Stone Age, to name a few. The group consists of Robert Daniels, the writer and guitarist, Yingduo “Louise” Liu on vocals, David Vallejo on percussion, Carlos Zamudio on bass and Andrew Weidig as the lead guitarist.

All members present emerged with the songs of their debut album, “When That Storm Comes,” along with a song in the works, presented for the first time in WZRD’s radio station. The band exhibited plenty of charm before and during the performance, with percussionist David Vallejo and Daniels cracking jokes about how to introduce the band in the opening minutes, as well as some melodic contribution between members.

Though only the members and their equipment were present in the performance, the music filled the halls leading out of the student lounge, as the mixers in the station carefully adjusted the volume and clarity of their eclectic performance.

During the on-air interview, Daniels commented on the moments in finding a new vocalist for the band: “You’ll have a male singer who’s, you know, kind of slated to a particular band, like how Mick Jagger could only really work in the Rolling Stones, but like, someone like Adele could work in any kind of genre, so it’s really the versatility that we’re looking for, she [Louise] definitely fulfilled that….” Though upon answering how Liu would affect the style of the band, Daniels felt she was an impressive person to work with in enhancing the feel of some songs:
“The second Louise came on, we saw that she had a very nice like soft vocal, it became pretty obvious that that song [“Drop”] would work with her.”

Their acoustic performance, a non-static choice in their performances, presented their versatility in the expression of their music. Daniels laughed as he spoke of the band’s evolution in performing under different companies, “We basically [play] mostly indie kind of stuff; a company we played with had been more ‘80s based indie, and you know, it’s been pretty interesting but [we’re] not rocking out on the Irish folk circuit.”

For those interested in keeping track with the group, Pharaon are on Bandcamp, Soundcloud and Twitter, with a release of their album “When That Storm Comes.” In the words of Daniels himself, “That’s P-H-A-R-A-O-N.