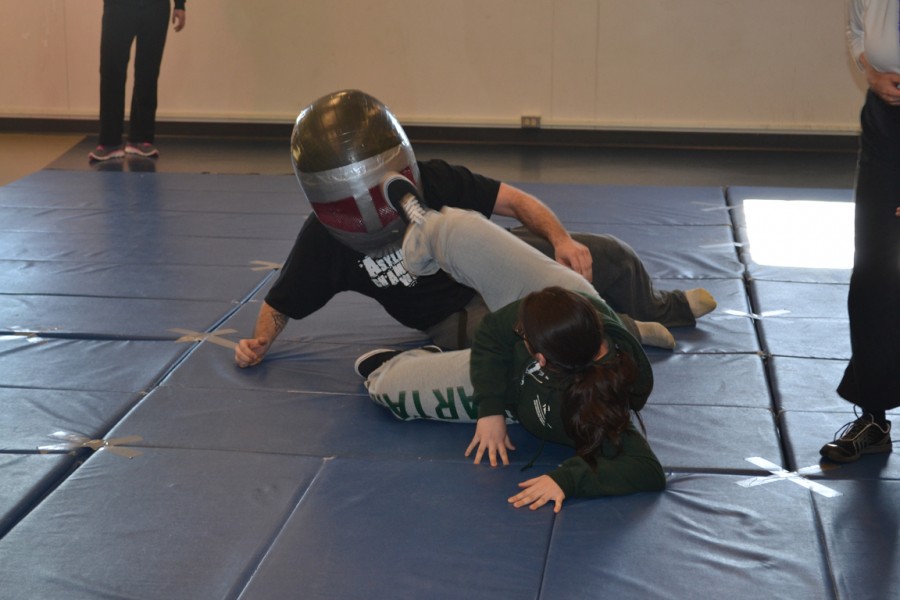 If you walked past Studio 2 of the PE Complex around noon on Friday, Jan. 30, you may have heard, “Look! Assess! No! 911!” echoing through the hall and seen female students implementing various self-defense techniques on a heavily padded fictional male perpetrator.

NEIU’s Campus Recreation hosted a self-defense workshop, and the mantra was shouted by each of the 11 female students taking the Women’s and Gender Studies course, WGS150: Women’s Self Defense. According to its description, the course “develops a framework for understanding violence and self-defense. Major focus is on learning and practicing awareness, prevention, assessment, verbal boundary setting and physical self-defense skills in simulated scenarios.”

The workshop was less of a hands-on experience and more of a visual summary showcasing the accomplishments of the students taking this one credit-hour course. It was an impactful demonstration of self-defense knowledge.

The students met for three Fridays in January and were instructed by Martha Thompson, Professor Emeritus of Sociology and Women’s and Gender Studies. Each of the women role-played alongside a fictional male perpetrator. They demonstrated various self-defense techniques including voice, boundary setting, yell, palm heel, elbow strike, eye strike, butt strike, slap to groin, knee to groin, knee to head, sidekick to groin and sidekick to head.

In some situations, the perpetrator approached them aggressively, head on. In others, he came in stealthily from the side. In either case, the students confidently asserted themselves and used the knowledge they had gained, over 12 hours, to skillfully defend themselves.

At the end of the session, the students, Thompson and the fictional perpetrator all held hands and formed a circle. Thompson asked them if they wanted to share a word that captured their feelings.

“Powerful,” was said loudly by one student.

Thompson, who has 27 years of experience as a self-defense instructor, is also Director Emeritus for Impact Chicago, a not-for-profit organization with the aim to teach self-defense to women and girls so they can avoid, minimize and stop violence.

She said, when asked why students take self-defense classes, that “one third of the women have experienced violence, the majority use it as prevention.” This majority sentiment was shared by at least one of the students.

“I’ve never been personally affected, but you shouldn’t have to wait. I’m taking [this course] before I have to deal with it,” the student remarked.

Another student shared her reason for taking Women’s Self Defense: she plans on joining the police force. Her goal is to gain experience that will better equip her as a woman police officer.

“I wanted to dust off my skills, but this has been intense and has brought out a lot of emotions, full out crying emotions. I now have a voice for myself and I’m using it,” she shared. The confident student then added, “I’ve encountered emotional stress and physical abuse. I never did anything back. But now if someone touches me I’ll know what to do. I won’t start the fight — but I’ll definitely finish it.”