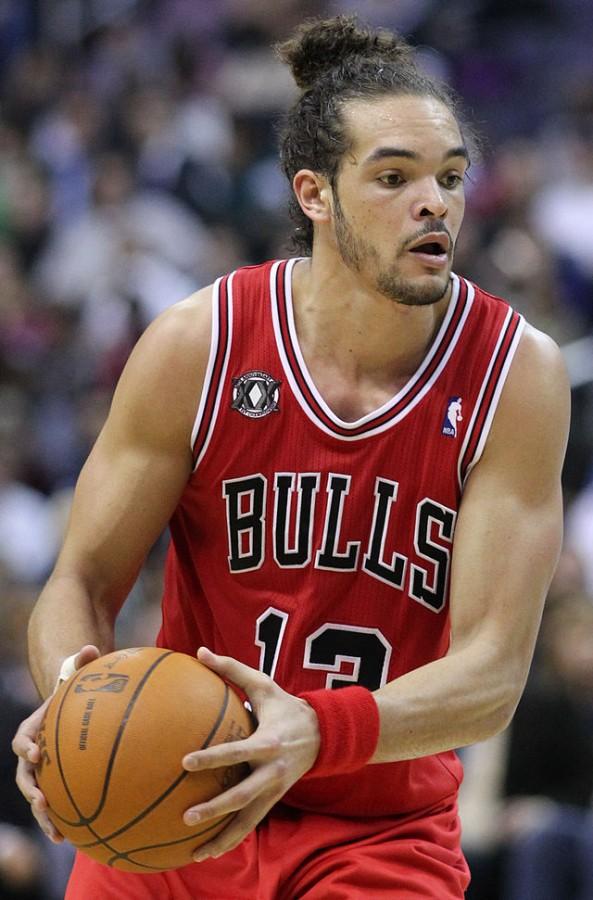 Joakim Noah has been battling injury all season and is averaging the least rebounds since his 2009-10.

It has been a roller coaster these first few months of the season for the Chicago Bulls, but they still find themselves in a decent position heading into the All-Star break. They are right in the thick of things in the Eastern Conference with less than half the season to go. They have two All-Stars in guard Jimmy Butler and forward Pau Gasol, but injury recovery has slowed former MVP Derrick Rose and reigning Defensive Player of the Year Joakim Noah.

Inconsistent play from those two stars have been a big part of the turbulence the Bulls have encountered lately. The Bulls seem to come out energized and focused just when playing against the best teams in the NBA. They recently beat the West’s top team, the Golden State Warriors, only to lose against one of the worst teams in the league, the Los Angeles Lakers, a few days later. They blowout teams like the NBA champion Spurs by 23 points, but then get blown out by the Utah Jazz. The Bulls can be argued as the best against the best, but also the worst against the worst, and a simple look at the numbers shows how and why this is happening.

Chicago is 13-11 against teams that are above .500, which is fourth best of the 16 teams that would make the playoffs if the playoffs started today. However, they are 17-9 against teams that are below .500, which is second worst of those 16 teams. Why is this happening? Why do they play with such tenacity against the elite, but then have no energy against the inferior? Is there a solution to their costly problems? The good news for Bulls fans is yes, these do seem to be fixable issues.

There are many different factors that can yield these bipolar results. You have to take into account injuries, home and away games, mismatches and more. However, when researching for similarities in the box scores and stats in these contests, there are common mistakes that plague the Bulls against the inferior squads: poor starts to halves, letting their opponents get to the free throw line too often and being outrebounded, which are common reasons for why a lot of teams lose in general.

Those problems practically disappear when the Bulls play against the top teams in the NBA. There is also another factor to why they win those elite contests; I call it “Second Half Furies.” These are instances that the Bulls come out after halftime firing on all cylinders. It is a common thought in basketball that the first few minutes of the third quarter are some of the most important in the game, and when the Bulls play well in those minutes, they can compete with any team in the league. In their games against teams that are above .500, the Bulls win the second half by an average of eight points, and in five of those games, they’ve won the second half by a double-digit margin.

In every loss against a sub-.500 team, the Bulls have trailed in the second half, and four of those losses were in the double digits. They’ve been outrebounded in each of these losses and have given their opponent over 20 free throw attempts. These are surefire ways to lose to any team.

However, against the elite, they only send their opponents to the free throw line 17 times per game. In three of those contests, they gave up less than 13 free throw attempts, including a game when the Houston Rockets went to the line just five times.

We’ve figured out the problems, so what are the solutions? Have a strong first half. Keep their opponents away from the charity stripe and rebound. A little “Second Half Fury” wouldn’t hurt either. If the Bulls can follow these simple guidelines, they should beat those teams they’re supposed to beat, and be on track for a deep playoff run.