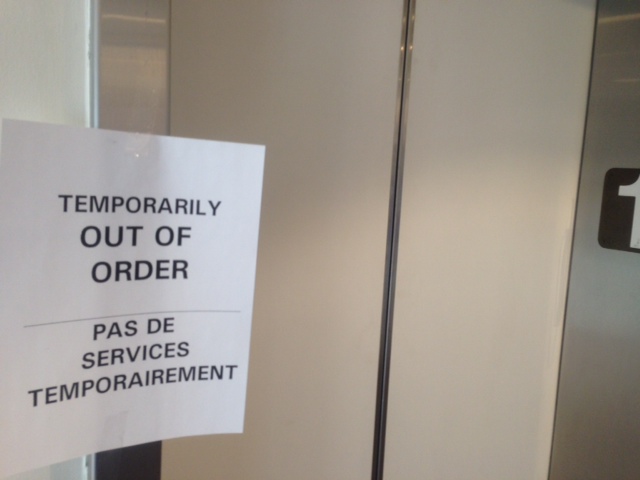 The elevator’s malfunction forced students to cramp and squeeze into the one working elevator.

In the beginning of the fall 2014 semester, Northeastern drivers were greeted with a surprise: The south elevator in the main campus parking facility was out of order. Like when most elevators break, it was mildly annoying, but manageable; things break, it happens. But as weeks turned into months, it started to take its toll on students. What began as a mild inconvenience was turning into a bigger problem.

The parking facility, five stories high, had only one working elevator. Student Nina Castillo said, “It’s sometimes a long wait. Waiting in rush hour when a lot of kids are getting out of class is annoying. Sometimes I have to get to work.”

Another elevator broke down in Lech Walesa Hall earlier this year, but that elevator was quickly repaired. The parking elevator was down for over five months and many students, like Castillo, were frustrated with the long wait. But there was a good reason, according to Parking Facilities Manager Sarator Whitehead, who said, “The elevator had to undergo a major overhaul requiring many replacement parts.”

The elevator has been repaired for some time, but according to Assistant Vice President for Facilities Management, Nancy Medina, it was unable to be used because, as she stated, “we are waiting for the City of Chicago elevator inspector to commission the elevator.” Chicago elevator codes mandate that all elevators must be properly inspected and tested by the Elevator Safety Division before being opened for use.

“Once we receive our certificate of operation, we will be able to legally place the elevator back in service,” said Medina.

The inspection was scheduled for Jan. 23, and passed the safety test. The newly repaired elevator is open for use again.