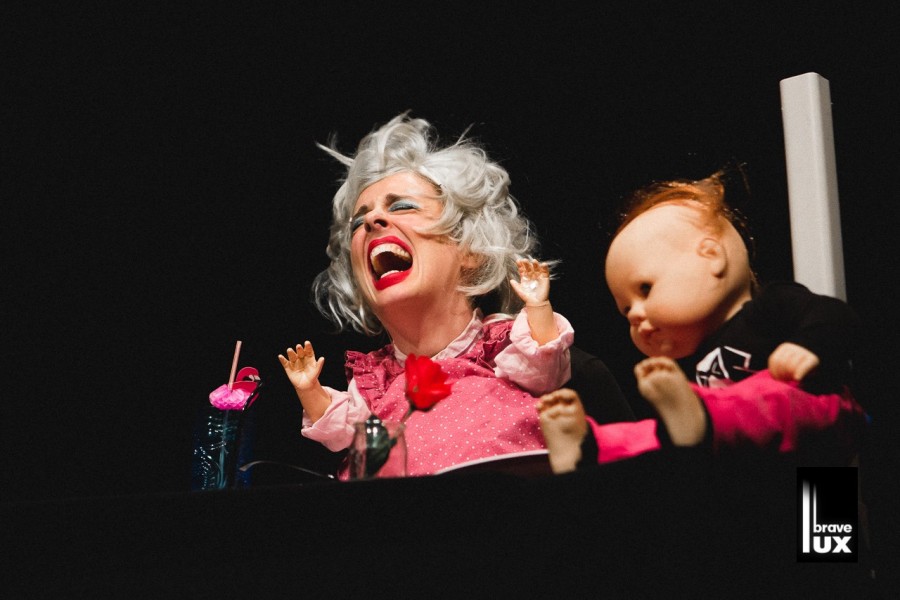 Manic and unpredictable, Vanessa Valliere on stage in "Nasty, Brutish, and Short."

Puppets, for no good reason, occupy a strange and often misunderstood place in the world. They’re often maligned and denigrated, cast without purpose as creepy artifacts, or delegated as simple entertainment for children by those who know nothing of Jim Henson or practical effects. It’s a good thing then, for the betterment of the worlds of art and those beyond them, that brave and adventurous puppeteers pay no heed to this kind of hogwash.

“Nasty, Brutish, and Short: A Puppet Cabaret,” showcased at Links Hall on Jan. 21 and 22. In truth, this was only one of its incarnations. Previous programs had presented entirely different acts, and later showings will likewise do the same.

The show, and the repeat showing the next day, had been sold out well in advance—something that forced this reporter onto a waiting list, giving him time to enjoy a Stiegl tallboy at the bar thoughtfully placed near the entrance to the theater. People from all around the city and involved in all aspects of theater and the arts milled about the bar-area as they waited for entrance. Performers intermittently came to socialize as well.

But it was worth the wait, the beer, and the cover charge.

I had gone in somewhat blind and had not fully anticipated the tour de force avant-garde display that followed. The theater of Links Hall was a small and intimate space. Several rows of seating had been provided, with soft and plushy pod chairs taking the front and side rows.

“Nasty, Brutish, & Short” thrived in the absurd and the abstract. No two acts were alike: Some were filled with abrasive and obscene slapstick humor (though do not take “abrasive” or “obscene” to mean inferior in any way) and some were infinitely subtle or tragic. Some were completely silent spare music or voice recordings and others were filled with verbose monologues or witty dialogue.

Their only connection, really, was a devotion to the absurd and a virtuosic use of Object Theater. So strong was this connection that it wasn’t until well after the performance that I realized they had not been written or performed with each other in mind.

Vanessa Valliere presented two vignettes, “Nice Try,” and “Your Best Self.” Her act seemed to hover somewhere between ideas of self-improvement and total insanity, including such bizarre characters as a demanding toy doll with a despondent and condescending masculine voice — commanding Valliere’s manic character to display her talents so it could thrash them. Valliere’s intense sense of physical and visual humor was beautifully suited to Links Hall intimate stage.

The Rough House Theater performance, “And Dream of Teeth,” concerned a single father, who, in a vivid nightmare, had been impregnated and abandoned by his wife. The child wanted his teeth. “And Dream of Teeth,” used paper, a naked man, bright shadows and lighting to tell its story. It had the largest cast and must have required a virtuosic sense of timing to have pulled off, with every prop and set piece guided and controlled in unison by an actor.

Meredith Miller’s Cabaret Interludes, “Three short tales of love, seduction, and heartbreak,” according to the pamphlet, included: “The Abduction,” in which, using her body, several puppets and a red velvet dress — that simultaneously functioned mechanically as an elaborate stage — she told a short lovelorn tragedy; “Shipwreck,” a short tale of a ship chasing a lighthouse, gently misled and destroyed on the high seas; and “Dance With The Devil,” a vaudevillian skit where her right half (through a meticulously crafted puppet) plays a seducing devil, whispering secrets, jokes, and slowly downing the left half of the artist in a lover’s embrace.

Joe Mazza’s “The Hubrist,” concerned the grandiose musings and pontifications of a tiny puppet who had only a small rag for a friend. “The Hubrist,” used probably the smallest space of any of the vignettes, but it held incredible detail. The podium of the titular hubrist, no larger than your average keyboard, towered above the audience and wore a sharp, angled façade of gold foil. The character of the hubrist, a small rag puppet with a wildly gesticulating arm, addressed the audience verbosely in his monologues. It was a deeply humorous and sometimes touching and tragic look at loneliness and the ego.

This incarnation of “Nasty, Brutish & Short” will not likely be seen again in a single performance. The artists, however, are all very active in the theater scene around the city—many performing the same pieces I witnessed at Links Hall.