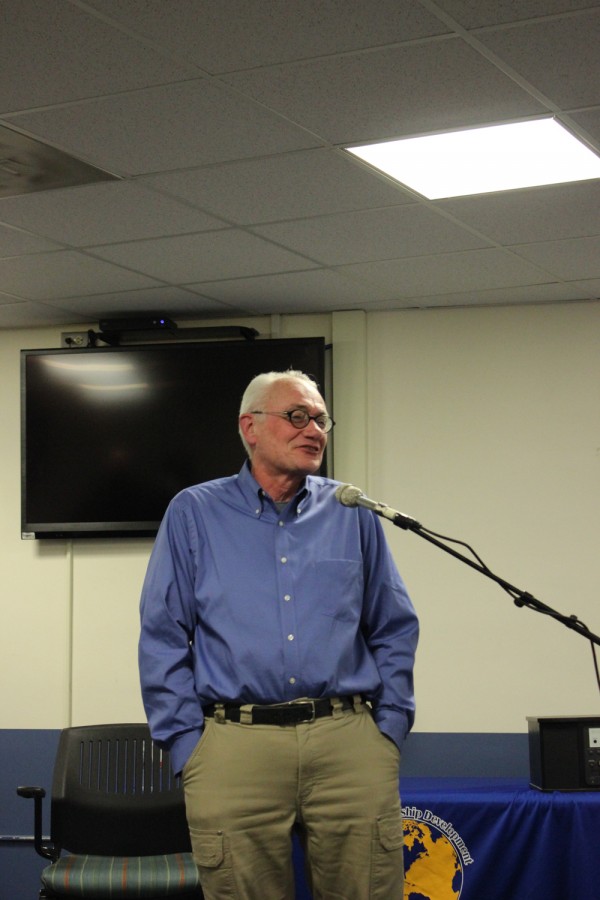 Ken Davis, a founder of WZRD and The Independent's precursor, the print, presents to students in the Student Lounge

Gathered in the student lounge below Beck’s Bookstore were about 30 or 40 students. They sat on sofas, chairs, even the floor — sitting next to their professors as equals, sipping lemonade, not quite sure what to expect. Some of them were nervous freshmen that were looking to get more involved at their school.

Luckily for them, the rest of the students were all members of the four student media groups on campus. They gathered to recruit new members but also to celebrate their long history on campus with the event’s special guest: local media legend, alumnus and one of the founders of the school newspaper as well as one of the original members of the group that became WZRD, Ken Davis.

The evening opened with the various editors and managers introducing themselves and their respective groups. Luis Badillo, Editor-in-Chief of the Independent, talked about the group’s history and importance of having a student newspaper.

The history of Seeds, the Literary and Visual Arts Journal, only goes back four years or so, but they remain just as popular, allowing a creative outlet for students who write, draw or practice photography.

The final group was the student-run freeform radio station, WZRD. Station Manager Jonathan Extract presented the station’s 41-year history and the pride he and fellow wizards — the official title of DJs and other full members of the radio station — felt to carry on the long tradition of freeform radio, playing a huge part in the ‘70s and ‘80s playing underground punk music before it was cool. “We’re literally underground,” he said, indicating the station’s location in the basement of the building.

After a supportive laugh from the audience, the special guest, Ken Davis, was introduced. He was holding original copies of the Print — precursor to the Independent — that he had edited and written in, found in the paper’s archives.

Nearly 50 years prior, a wide-eyed, 18-year-old Ken Davis was holding fresher copies not really knowing what to expect. As he looked at the present day wide-eyed students, he said, “In 1967, I couldn’t imagine, 50 years later, standing in this space and [the media] would still be here.”

Davis’s enthusiasm shown through his eyes as recounted his days in the very room the event was held in. While he was editor, a battle raged on campus between a professor named Daniel Stern and the rest of the faculty. Stern, presumed a radical liberal, was not liked by the predominantly conservative faculty. There were fights between the students and the faculty on whether or not Stern would be let go. Davis said, with a nostalgic grin, “And the Print was glad to light the fire.”

One day, Davis dropped by the office of the head of the faculty committee, whose name Davis does not remember. Davis asked whether or not the committee had made a decision on Stern’s status, when she said they had, he asked for information.

The faculty head said they were not ready to say, that they had not even told the president of the university. Davis told her he needed the information for the paper, so she gave Davis a copy of the letter that was to be sent to the president. He put a copy of that letter in the paper the following day. The president was less than happy to learn about it through the student newspaper.

After graduating, he and fellow alumni formed a radio club — WZRD — on campus. After a few years, they obtained an actual commercial broadcast license, allowing them to beam into thousands of homes across Chicago’s Northside.

Rebellion and rule-breaking seems to be in Davis’s DNA. Just as it played a role in leading the punk scene in the ‘80s, some of the early programming of WZRD was playing gay and lesbian programming before most people even knew what a lesbian was.

Many students asked Davis for advice. Most questions revolved around that ever-integral question: “How does media stay relevant?” Davis didn’t really have an answer, but assured that editors at the New York Times and the Chicago Tribune, producers at CBS and NBC, and personalities at NPR and WBEZ were asking the same exact question.

“I don’t have a lot of wisdom,” he said. “Other than the incredible importance of media in this country.” Davis then said that he was not jealous of the wide-eyed students, but that he would “love to be back here again, because what’s going to happen [in media] is stupendous.”