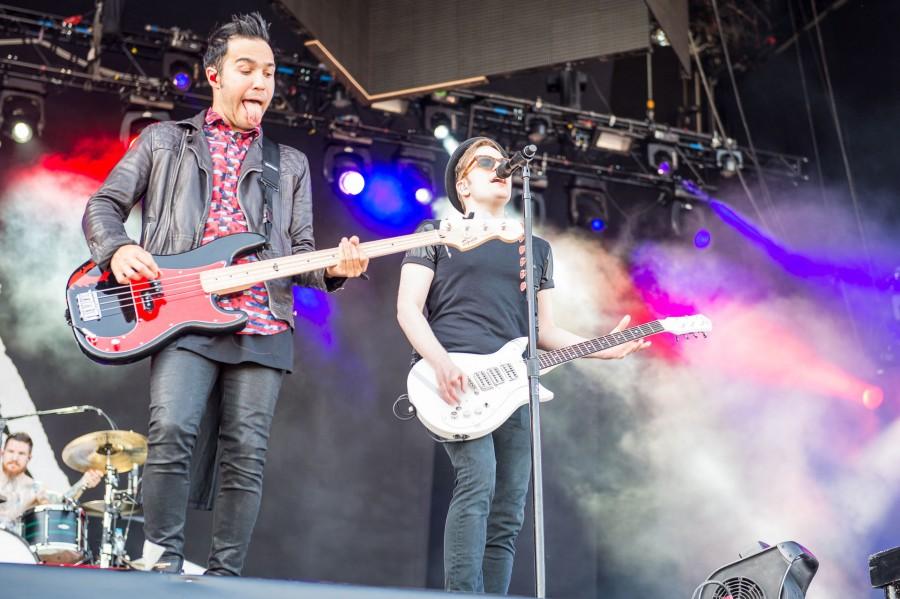 Like many aging artists who have been in the music industry for over a decade, many fans have a hard time deciphering what Fall Out Boy wants to be these days.

When Fall Out Boy formed in suburban Chicago in 2001, they were a punk band led by lead singer Patrick Stump and bassist Pete Wentz – Chicago natives with a strong presence in the hardcore punk scene in the city. Throughout their 14 year existence, they’ve evolved into a staple of the emo-punk genre.

Their new album, “American Beauty/American Psycho,” shows their commitment to the latest phase of their transformation.

The bad news for die-hard Fall Out Boy fans is, though the soulful voice of Stump is still present, their distinctive emo-punk sound has become more pop-punk with a hint of rock and roll and even hip-hop (they’re touring with Wiz Khalifa this Summer).

After a few years of silence, in 2013, the band released “Save Rock and Roll.” It introduced their new style, and “American Beauty/American Psycho” has followed suit perfectly.

Its critics will say, “Where did the guitars go?” and, admittedly, they’re noticeably absent throughout portions of the album. But that won’t take away from the rocking out that Fall Out Boy fans have become accustomed to. A few songs on AB/AP were clearly written as radio sensations with catchy hooks and almost Taylor Swift-esque beats, but those instances are brief and accompanied by Stump’s addicting voice.

While this may irritate some Fall Out Boy lifers, those fans must realize that 2005 has long since passed. All four members of the band are over 30-years-old, and the emo-punk scene is made of a younger crowd than the “new” Fall Out Boy. AB/AP is a mature, modern mix of every sound Fall Out Boy has produced through their 14-year career, plus some new experimentation.

“Centuries,” the album’s first single, has become a staple in sports montages because of its impossible-to-not-sing-along-with hook and hard hitting, aggressive sound — a sound that is repeated often throughout the album.

The album’s opening track, “Irresistible,” uses a horn-led instrumental that so lives up to the song’s name that you’ll likely soon be hearing it on Top 40 radio. The same can be said about the toe-tapping “Uma Thurman” which samples “The Munsters” theme song.

Though “American Beauty/American Psycho” boasts some clear hits, the best songs will likely go unnoticed by radio listeners. The maturation of Stump and the band as a whole is best featured on “Jet Pack Blues,” “Novocaine” and “The Kids Aren’t Alright.”

The concluding track, “Twin Skeletons (Hotel in NYC)” has a bit of a Panic! At The Disco feel to it, but Stump’s voice trumps anything Panic! lead singer Brendon Urie has ever put out. It’s one of the best tracks on the album.

“American Beauty/American Psycho” is a very solid Fall Out Boy album. If you’ve been listening to their music since 2003’s “Take This To Your Grave” like I have, try to be open to their new sound. There are still flashes of their early 2000s work. Flashes that mesh perfectly with their new, more mature sound in their sixth LP.

Instead of questioning what you think they’re trying to accomplish, realize what they are: a versatile, reliable, veteran band with the one of the most unique sounds in the music industry.