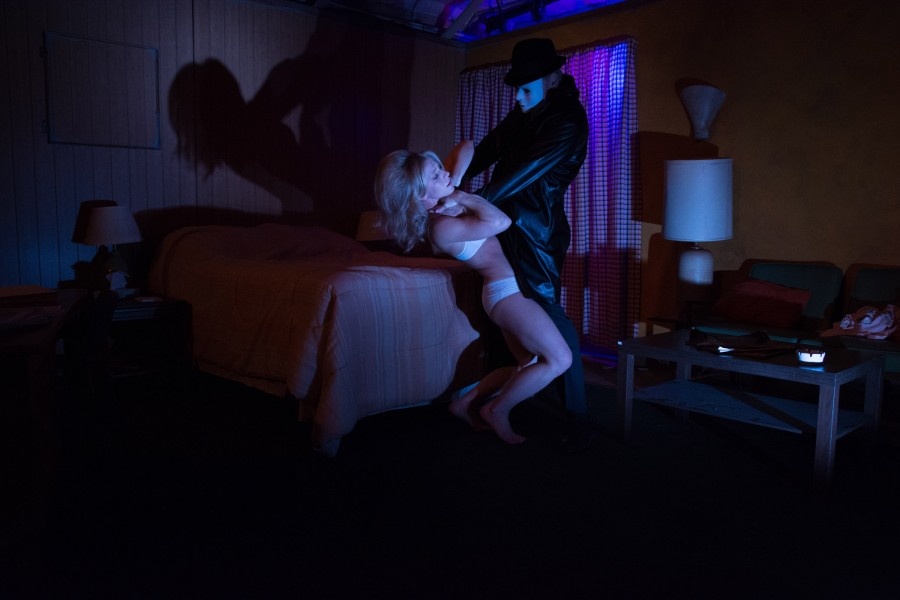 Matchbox (Alexandra Fisher) is strangled to death by a masked killer (Jim Poole).

Few would believe the Chicago Theatre is more lively and diverse than the theaters of the more famous Broadway productions of New York City. But risk taking is in Chicago’s veins: it is a place to come, build your skills and try out new things without the fear of failure. Second City native and playwright Darren Callahan takes many risks, some that fly and some that fall in his latest production, “Desperate Dolls”. It made its world premiere at the Strawdog Theatre in Chicago in late November of 2014.

Directed by Michael Driscoll, “Dolls” follows three beautiful, young women who come to Hollywood in 1968. They come looking for stardom but find trouble. They land an audition with ‘Sunny’ Jack Fennigan, a small-time producer who makes female-dominated independent films but lacks the funds to make the big pictures he desires. But when a powerful agent known only as ‘the Captain,’ played by Jim Poole, swoops in seemingly to save the day, Sunny Jack and his girls (known only as Matchbox, Pretty Sexy and The Vil, played by Alexandra Fisher, Kelsey Shipley and Hillary Marren respectively) have their dreams turn to nightmares of murder, hypnotism and seedy motel rooms.

“Dolls” plays like those B-horror movies from the 60s and 70s you find in the dark corner of Netflix when you’re bored at 3 a.m.; beautiful, naive girls who want to be stars, twisted psychos, and of course, buckets and buckets of blood. Unlike those B-movies, this play wasn’t something you like because “it’s so bad, it’s good.” It actually was good.

The acting was, of course, over the top but not in a distracting way. It was homage to those movies we love to hate but took a modern spin on it. Joe Mack, who played Sunny Jack, warned his wife about the despicable things his character does. Sunny sleeps with all three of the girls in Dolls, almost raping one, and there is of course lots and lots of blood. “But what I didn’t expect was to feel sad for these girls,” Mack said.

Fisher, Shipley, and Marren bring a sense of innocence to the piece. They’re wide-eyed dreamers who will do anything to be stars. Though none of the characters have a real name, so to speak, we care about them because they are real people.

Murder is not an easy thing to stage but the stage combat displayed in one of the first murder scenes was so impressive, I forgot it wasn’t real but rehearsed; she’s not actually getting hurt. The Captain picks Matchbox up by the throat with one hand and throws her across the room. This is more impressive when you take into account how small the stage was. The space was no larger than a big living room, holding about 30 or so audience members—some of their feet actually touched the set pieces. This level of intimacy made the fight choreography more exciting and the play even more bone-chilling.

We like B-movies because they’re simple and we can laugh at ourselves for watching something so silly. “Dolls” defies that convention and is more than just a bloodbath. It makes you think about the seediness of Hollywood, the desperation of fame and that monsters aren’t just on the silver screen. Sometimes they are in the room next to yours.

Maybe in the future, “Desperate Dolls” will play among the elite of Broadway or be filmed in one of Tinseltown’s studios, but remember you saw it in Chicago first. The Second City is first in just about everything else.