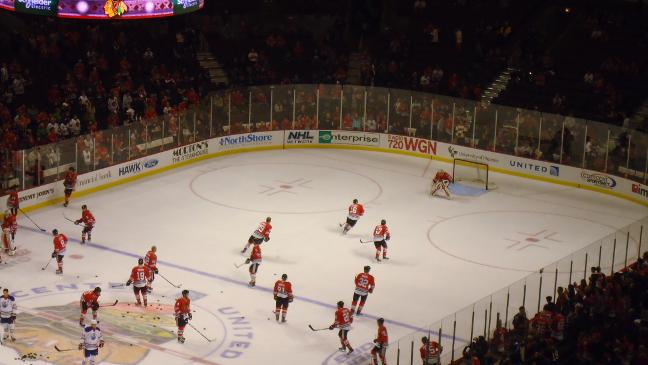 Over 20,000 fans standing on their feet cheering and clapping in unison to the simplest yet most symbolic song that has taken over the United Center will finally take place once again this hockey season. Chelsea’s Dagger blares over the PA system as Chicago Blackhawks fans rise to their feet to greet the Hawks after what seemed like an eternity apart. Tonight, Tuesday January 22, is the home opener, and the Hawks are anticipated to give the St. Louis Blues a ride.

After 113 days on strike, both the players and the owners were ready to move on. Members of the National Hockey League (NHL) and National Hockey League Players Association (NHLPA) were able to ratify an agreement to let the season take to the ice. They were able to end the labor strike before eating up more of their season. With a new shortened schedule set and abbreviated training camp behind them, the Hawks are ready.

The offseason may have lasted longer then hoped for, but it gave these guys a chance to sharpen their skills. Corey Crawford, Hawks No. 1 goalie, is quoted in the Chicago Sun Times saying, “It is something that’s going to motivate me. I’m a competitive guy. I’m confident right now and I want to do the job.” His motivation: letting two pucks get past him in last season’s playoff series against the Phoenix Coyotes.

As Crawford gets ready to make saves at the net, his teammate Marian Hossa is ready to score at the net. Hossa, coming back after a severe concussion during the same set of playoff games in April, has reportedly made a full recovery. As part of the Hawks top-line left wing Hossa’s recovery came at the perfect time.

In seasons past, Dave Bolland focused on defense. He will now try his hand at center. Bolland, a Canadian native, isn’t a newbie to the position. Back in the minors he shelled out an impressive number of goals that makes him and his coaches confident he can do it again.

The Hawks opener is the 3rd game they will play in four days. As they prepare to go on the road again after tonight, the Hawks will be back in Chicago on January 27 to face their rivals, the Detroit Red Wings. With the season crunched into only three and a half months there is little room for error. All of those unofficial practices during the lockout will be a testament to how hard the Hawks truly conditioned. Let’s hope for the best as the 2012-2013 season gets underway.