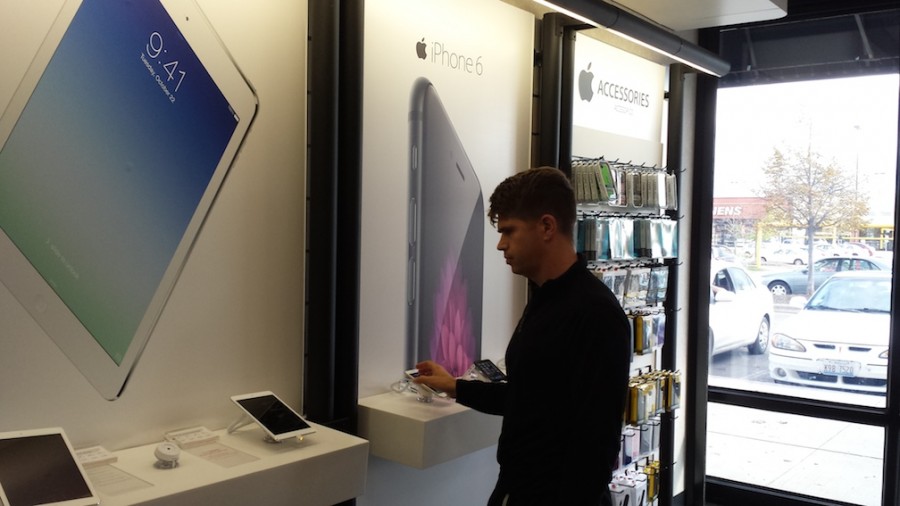 Apple unveiled the iPhone 6, the best worst kept secret since the public acknowledged the phone’s existence online long before the official announcement.

What’s the hype? The iPhone now has a bigger screen! The public, however, was already well aware thanks to the photos leaked of the product, making it a bit unnecessary to hype the phone. The only thing people didn’t know was the specs.

Steve Jobs once said, “No one’s going to buy them (big phones).” It appears he may be dead wrong. Apple needs a bigger screen because other major competitors, mainly Samsung Galaxy series, have bigger screens as a selling point. Consumers want a big screen for media purposes, like movies and [TV] shows.

Besides upgrading to a bigger screen, some of their new features are iOS 8 and the A8 chip that runs the phone faster, it also has a duel LED flash which takes pictures rapidly and is a nice feature in all, but it still lacks in other areas. For example, the camera still contains 8 megapixels, the exact same MP from their previous counterpart the iPhone 5S and 5c. On the other hand, the Samsung Galaxy S5 has 16 MP, but their previous predecessor, the Galaxy S4 was 13 MP

So why didn’t Apple upgrade the camera? Is it because most consumers do not care about how many megapixels there are? After so many megapixels who can tell the difference, most just want to take pictures and could care less about the numbers. The numbers only matter to photographers and those who are knowledgeable when it comes to technology.

The iPhone 6 still uses built in memory. It offers 16, 64, and 128 gigabytes of memory, while the Samsung Galaxy S5 has only 16 and 32GB. Apple will likely continue with internal memory because of one thing: money. Purchasing the iPhone 6 can cost $650 or more depending on the carrier. If someone wishes to have more memory, they need to pay an addition $100. If you want to get 128GB, good luck paying up to $850.

Samsung Galaxy S5 users have the advantage of expanding their phone’s memory with the use of a micro SD card. It can go up to 128GB. What better is that if someone has 16 gigs and has a 128GB micro SD card, you now have 140GB of memory. Obviously this method is more cost effective and beneficial for the customer.

So why doesn’t Apple use this method? Because this method would mean they can not get those extra nickels and dimes from their customers.

But despite some flaws with the iPhone 6, people are still going to buy it. Apple can rely on the hardcore Apple fans, those who have never used an iPhone, and those who are switching from Android.

Rachel Haas of IGN wrote that, “…the rush to secure the new models overwhelmed Apple’s website, resulting in a frustrating online shopping experience for eager customers.” Sebastian Anthony of ExtremeTech stated that the iPhone 6 sold 4 million in 24 hours before it even sold in the streets.

The iPhone 6 success does not seem to depend on its actual technology any more. The Samsung Galaxy S5 is the better phone yet people are breaking down firewalls to pre-order their phone. I just hope that those who blindly follow a corporate brand don’t end up buying the emperor’s new clothes.