Fun for the Whole Family 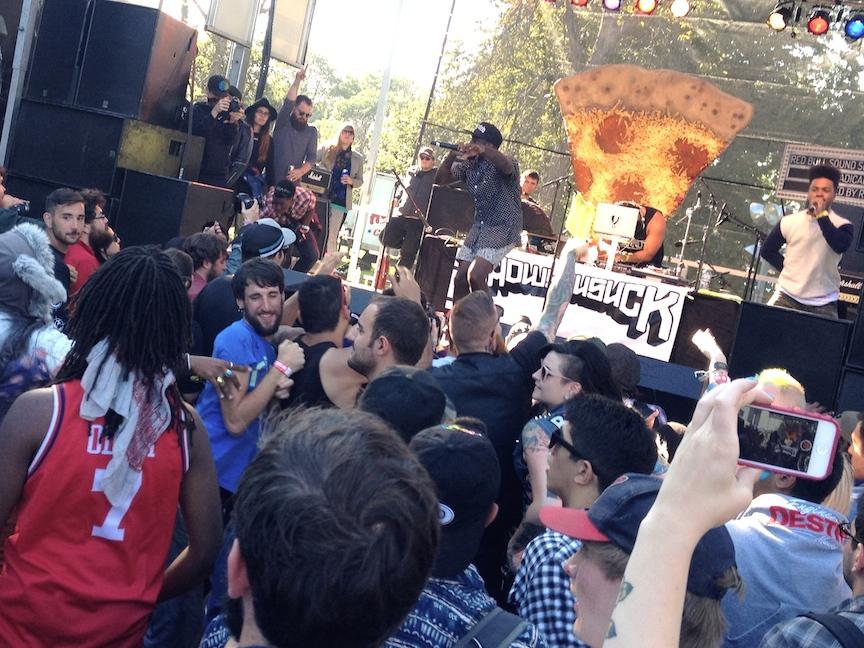 Forget the Pizza Underground, the real pizza party was at Show You Suck.

Riot Fest is a punk rock music festival that started in Chicago in 2005 at several venues throughout the city and found a home in Humboldt Park in 2012. Riot Fest continues to grow each year drawing more crowds, bands and vendors.

Saturday’s sunshine was a great relief in comparison to the cold rain the night before. The festival was packed, bees were buzzing, lines were long and the mud was like quick sand. In the middle of punk band Face to Face’s performance, a man’s hat flew off and sank into the mud in seconds.

The bands that really stole the weekend were Chicago natives Rise Against, Stiff Little Fingers, Me First the Gimme Gimmes and The Bouncing Souls.

NEIU student Alex Krause had the best time at The Descendents’ performance. “I wasn’t much of a fan until I saw them live and went to check out their (mosh) pit. The pit had the best energy with people there just enjoying the purity of the music,” he said.

The major disappointment of the festival was The Pizza Underground, a pizza-themed Velvet Underground tribute band led by Macauly Caulken of “Home Alone” fame. The band had an uninspired stage presence and the crowd began speculating if the band was already drunk.

The best set, hands down, went to The Flaming Lips.

The stage was lit up with screens, dripping light effects and colors. All the power required to fuel the effects resulted in a ten minute loss of power. Luckily for them, the following act, The National, got stuck in traffic, so The Flaming Lips didn’t have to cut their set short.

The Pussy Riot Panel was a new addition to Riot Fest. Pussy Riot is a political punk-rock band from Russia. Members of the band faced 21 months of imprisonment after staging a political protest in a church. On Friday night, Black Flag’s Henry Rollins moderated a discussion with Nadya Tolokonnikova and Masha Alekhina of Pussy Riot, journalist Marcelle Karp, Bad Religion’s Greg Graffin, Rise Against’s Tim Mcilrath and the man known as Riot Mike.

Hundreds gathered to listen despite the cold, drizzling rain. The discussion covered Pussy Riot’s experience in Russia as well as the responsibility punk music has to question authority and push for change. Rollins told the crowd that huddled around the stage in the rain and mud, “You need to be strong in your own thoughts and you need to free yourself.”

The discussion touched on misogyny in relation to what happened to Tolokonnikova and Alekhina when they were arrested in Russia as well as its presence in the United States. Karp said, “feminism means women and men are of equal value.”Alekhina warned the crowd through their translator, “If you think there’s a big step from a democracy to a dictatorship, you are wrong.”

Crowds lingered at the various attractions between bands. In addition to the previous year’s attractions, Riot Fest had a second Ferris wheel, more rides, a haunted house and Lucha Libre wrestling.

The food ranged from carnival food like fried Oreos and hot dogs to a wide variety of vegan friendly options as well as some excellent Thai and Mexican vendors.

The most shocking part of the festival seemed to be how relaxed the crowd was in comparison to other years and other festivals. Kyle Damien Page came all the way from New York City for the lineup and when asked if there was anything outrageous about the festival, he replied, “Nothing is crazy anymore.” Then he thought about it for a minute and continued, “Actually, that is what is outrageous about this festival. There hasn’t been any gratuitous violence or overt machoness.”

Krause also said, “I was actually expecting people to be rough in the [mosh] pit but everyone was really fun and engaging.”

Security guard Joe Zeidel agreed, saying that the festival was “mellow” in comparison to other festivals like Pitchfork and Lollapalooza. Parents felt the festival was safe enough to bring children of all ages.