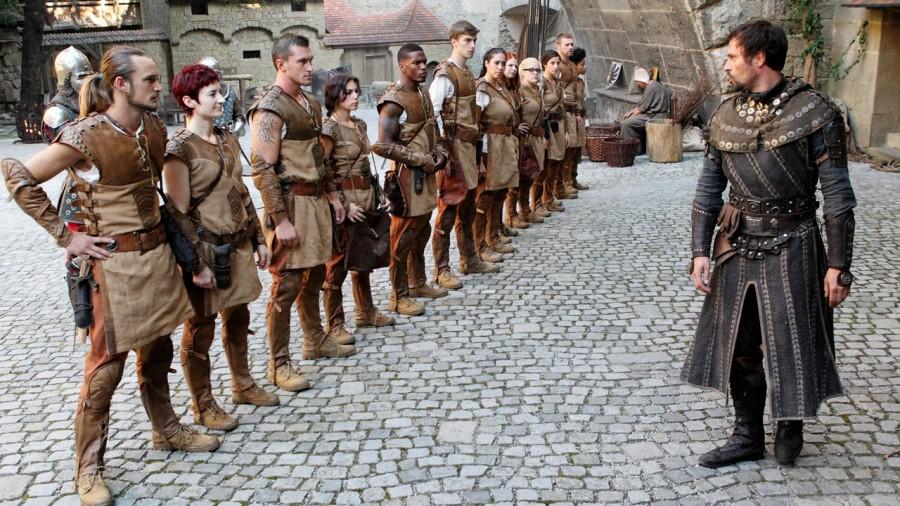 Much Like Survivor, The Paladins must complete a set of weekly challenges to avoid elimination.

For a long time, audiences of reality TV have known that the shows they have been watching are just the opposite of reality. Shows like Duck Dynasty, Toddlers in Tiaras, Storage Wars are all commonly known to be heavily produced and directed, even though their creators would have you believe it’s authentic.

Even more distressing is that these shows have excellent ratings and rock bottom-budgets, encouraging networks to forsake more traditional story driven programs.

But, alas, in these dark times rides in a hero from the evergreen fields of ABC. This Hero’s name is “The Quest,” a show produced by Jane Fleming and Mark Odesky, who also worked on Peter Jackson’s Lord of the Rings films.

The concept is to have reality style competitions with 12 contestants, set in a scripted fantasy world. Every aspect of the show that the 12 contestants experience is meant to immerse them into an authentic medieval tolkienesque fantasy adventure. Even the castle the contestants live in is occupied with actors clad in period appropriate garb, performing the menial tasks to keep a royal fortress in good condition.

The 12 contestants are solely referred to as “Paladins” and are told that they have been summoned to help defend the land against the armies of an entity known as Verlox, The Darkness. Verlox can only be defeated with a magical weapon known as the Sunspear which is conveniently divided into 12 pieces, one for each Paladin.

Each week with the help of characters like Queen Ralia XXIII, her advisor the Grand Vizier, Head of the Royal Army Sir Ansgar and Crio “The Dreamer,” Paladins are banished one by one until one is left to wield the Sunspear as “The One True Hero” and defeat Verlox.

If any of this is beginning to sound absolutely ridiculous for a reality show, that’s because it absolutely is. The Quest every week, without fail, delivers just a fine layer of cheese in every episode. Some episodes just have a silly premise, like the Paladins needing to find dragon’s tears to cure an ailing queen. Some story beats are awkwardly timed in an obvious effort to move the narrative forward. And the actors chew up the scenery every chance they get. The poor actors can’t seem to remember what country they’re from, because at least 5 different European accents are used throughout the course of the show.

But the thing that makes “The Quest” such an enjoyable experience is the sincerity of it all. Aside from the camera crew, the Paladins freely interact with the extras dwelling in Castle Sanctum. On several occasions, the main actors will go off-script, but stay 100 percent in character as they create new experiences for the Paladins. As the Paladins participate in some silly plot driven exercise, sweeping orchestral music (fitting for shows like Game of Thrones) will come in and accent the scenes. Even the ambiguously European Sir Ansgar will come in and steal the scene with an improvised pep talk or by unloading a can of beat-down on an animatronic ogre.

And the excitement of the Paladins experiencing all this is palpable throughout each episode. Each of the contestants coming from different walks of life (i.e. Katie the bartender, a math teacher, Shondo the MMA fighter) show a brimming enthusiasm to be participating in the magic of a fantasy adventure, albeit one that ostensibly comes from a dime novel. Each time they pick up a sword, or brag about manning siege weaponry is not just an exciting moment, but one that might even induce jealousy in the viewers witnessing how much fun these regular folk are having. And that passion fuels the already present drama built into a reality competition show.

Overall, this may not be a show for everyone. If you are going to take the show too seriously, you might as well be locking yourself in a dungeon. But if you’re anything like the Paladins and are looking for a little adventure, The Quest will take you on a journey unlike any other in television.