When Police Point Guns at Civilians, Do We Really Have Any Rights? 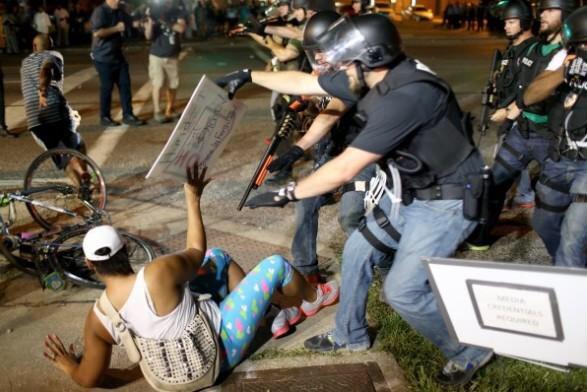 This protestor was holding a sign. Police respond with a shotgun in her face.

The ongoing protests in Ferguson, Missouri are a reaction to something that lingers in our society that goes beyond racism and power-tripped white policemen.

The selective privileges those in law enforcement can use gives police officers the right to use violent force with limited consequences.

The shooting of a black teenager, Michael Brown, by a white police officer can be perceived as racist, and it should be.

The Ferguson police department has 50 white officers and 3 non-white officers. The population of Ferguson is 70% black. Michael Brown was unarmed and an autopsy found that he was shot six times—twice in the head.

But, in 2006, unarmed 16-year-old Vincent Smith Jr. was shot in the back of the head and killed by Gary Police Officer, Levi Randolph, as the young man fled a burglary. Both the officer and suspect were black. Randolph was acquitted of reckless homicide with the defense of fearing for his life as Smith reached into his hooded sweatshirt.

In 2009, an L.A. County Sheriff Deputy shot and killed Avery Cody Jr., an unarmed 16-year-old. The young man was shot in the back as he ran away and the Deputy claimed the cell phone Cody was holding was a gun.

The moment when we go from being a law-abiding person to a criminal suspect—a change made at the whim of a police officer’s immediate feelings—we lose all of our rights. Everyone in America, regardless of racial label, should feel alarmed by the negation of human rights by armed police officers.

One photo from Ferguson (taken by Scott Olsen of Getty Images) shows white police officers with helmets, vests, boots, and military rifles, approaching a black man with a backpack and empty hands in the air. Two of the officers had their rifles pointed directly at him.

In this instance, what rights does this man have? Afterward, photographer Scott Olsen was arrested.

In moments of an encounter with armed policemen, the Bill of Rights is suddenly an afterthought. The democratic and free basis of our society instantly turns into submission to totalitarianism.

When militarized riot police emerge from armored trucks wielding weapons and tear gas, a midwestern suburb can turn into Gaza, Iraq, or Libya, in an instant.

Journalists have been arrested for leaving designated press areas away from protests, to exercise their freedom of speech by covering the actions taking place.

The Federal Aviation Administration (FAA) declared a no-fly zone for the Ferguson area (by the request of local law enforcement) for low flying aircrafts. That restricts news helicopters from covering the protests from above.

The freedom of press is also an afterthought, much like the personal experience of encountering someone with police power.

We should rationally look at these situations and realize that regardless of what rights we think we have, every time a police officer aims their selective privilege at us we are imprisoned by that power. All we can do is say “yes, sir” or “no, sir” and hope that the officer doesn’t perceive our physical mannerisms as being intimidating or aggressive.

The fact that all of our individual rights are subject to a police officer’s immediate assumptions is what breeds the racist element of police brutality. With a privileged perception, a police officer with racist fears can easily exercise his or her power after being emotionally triggered by such racist fears.

What we need to do—collectively as a society—is get rid of the gap in rights and privileges before the killing of unarmed young black men continues and before it can be used against any other group of people.