The Chicana Movement on 18th Street 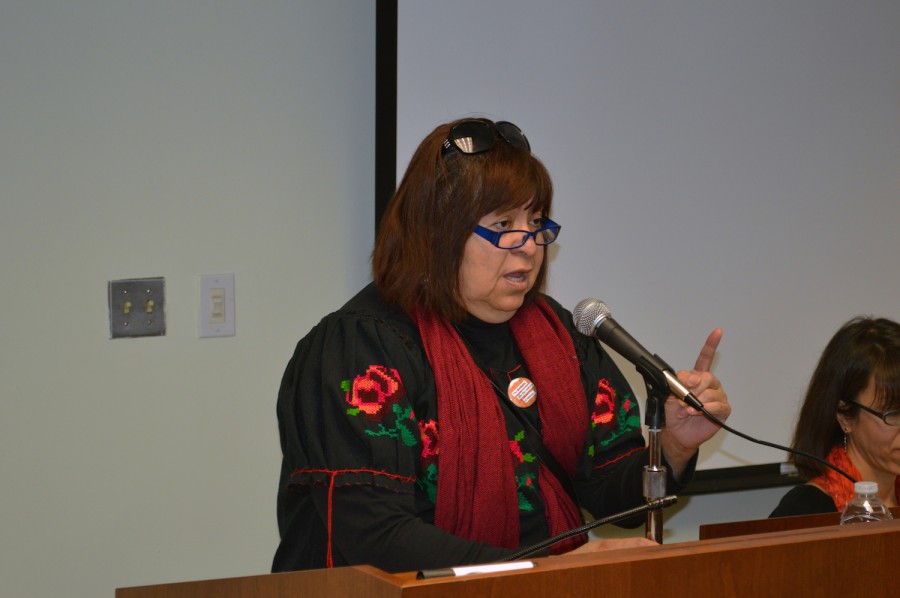 
Three brave Chicanas from the barrio of Chicago’s 18th Street reminisced with students at the El Centro campus. It’s a movement that dates back to the 1960’s. Together, they shared stories describing the struggles of many Chicanos and Latinos facing prejudice in Chicago from their recently published book, Chicanas of 18th Street: Narratives of a Movement from Latino Chicago.

“Chicana” represents an American woman whose parents or grandparents relocated to the U.S. from Mexico. Victoria Perez, Magda Ramirez-Castaneda and Maria Gamboa discussed how this movement shaped their community.

For Castaneda, it began alongside the fight of the United Farm Workers. “The workers were earning poverty and exploitation,” she said. “The struggle with the farm workers and their families gave me the courage and strong feeling to unite, organize, boycott and picket along with other students.”

Perez also looked up to the Chavez movement of the 1970’s and participated in the boycott of lettuce and grapes.

According to Perez, the ugly reality of what was awaiting her is what prompted her to take action.“This event has taught us that everything that we have has been fought for,” said NEIU alumna Julia Gutierrez. “Nothing has come easy for marginalized groups.”

According to Gutierrez, the Chicanas represent the fact that women were brave and stood up to gender, class and racial injustices happening around them. Gutierrez is a Professor of Sociology and Women and Gender at NEIU.

“That’s why the book was important to write,” said Gamboa. “We needed a voice here in Chicago.”

Castaneda recalled in 1970 when the Chicago Tribune referred to Emiliano Zapata as a “bandit.” According to Castaneda, that is absurd because for Mexicans, he is a revolutionary hero. A group of 5,000 people protested in front of the Chicago Tribune building, demanding an explanation.

The Chicago Tribune eventually apologized to the Latino community for the remark.

In 1972, the CTA was forced to stop discriminatory practices against Latinos seeking jobs with the company. The CTA had 12,216 employees in 1972, and only 246 of those employed were Latinos.

By picketing and marching, they “told CTA administrators that since Latinos are 13 percent of Chicago’s population, the CTA should have a minimum of 1,600 Latino employees, according to federal guidelines,” said Castaneda.

Although some were arrested during demonstrations, “it became a victory for Latino workers.”

This year, the Chicanas are celebrating 45 years of friendship.

“Women can work together. We can have bickering fights, but in the long run we stay together and united, especially when it comes to struggling and for a better world in our community for our children,” Castaneda said.

Graduate student Celia Farron said that she wants to see more of the Chicano Movement and other contributions to Chicago communities by Latinos throughout school curriculums.

“Going to school K-12, I just feel like I’m more familiar with the African American struggle and the Civil Rights Movement,” said Farron. “It is missing from our community, and that leads to a lot of social issues that we see in the youth.”

Castaneda encouraged students to create their own movement, whether it’s Chicano, Latino or American, to create the change necessary for a better community.

“[Create] a better space, a better world, and finally a better planet,” said Castaneda. “You can do it. The future will be prepared by [students] to lead us into a world of equality and justice.”

Chicanas of 18th Street: Narratives of a Movement from Latino Chicago, written by Leonard Ramirez with the help of Yenelli Flores, Maria Gamboa, Isaura Gonzalez, Victoria Perez, Magda Ramirez-Castaneda, and Cristina Vital, is available for purchase online and in local bookstores.