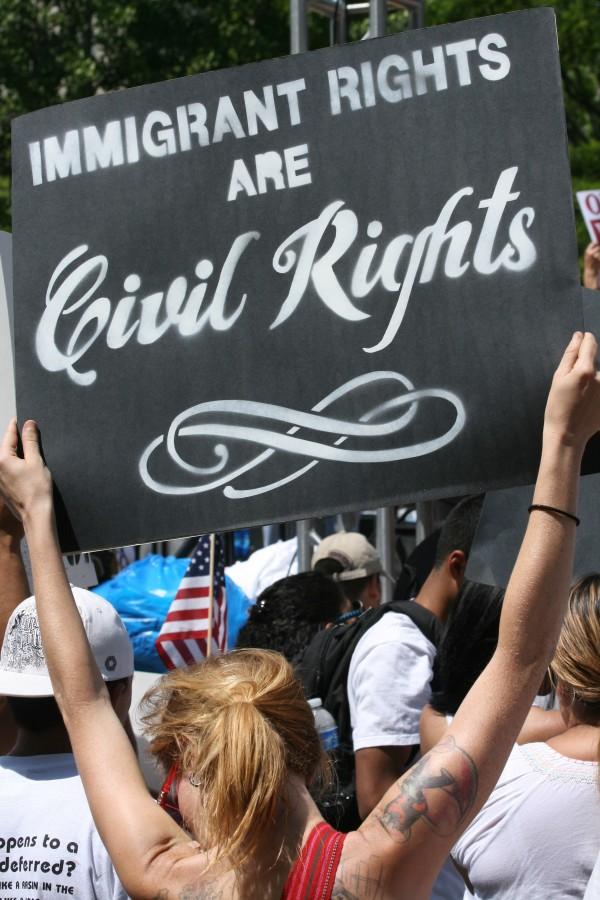 Congressman Luis Gutierrez visited Northeastern on April 28, 2014, to read from his new memoir, “Still Dreaming: My Journey from the Barrio to Capitol Hill”and to discuss the latest in his fight for Immigration Reform.

Gutierrez has been in the political spotlight since the 1980s and has fiercely waged the fight for all immigrants across the United States.

Gutierrez began his presentation with an excerpt from his memoir: in 1984, his Chicago home was firebombed by an unknown arsonist, caused by what Gutierrez believes to be his political opponents.

Gutierrez then discussed his disappointment with the current Congress and the deportee numbers; he stated, “1100 people (immigrants) are deported every day.” He also said that many of these deportees are mothers and fathers. Gutierrez’s fight could not be more just and honest.

Basically, what Gutierrez is fighting for are human rights and really, American rights.

Although there are immigrants who are deemed illegal, there are unarguable amounts of logic that illegals are as American as any American born who contributes to the American society and keep the country afloat with hard work but only lack documents.

They are employed by American businesses. They pay sales taxes, property taxes, state and/or local taxes. According to Kevin Maloney of policymic.com, they contribute “$6 billion to $7 billion in Social Security taxes for benefits they will never get using an Individual Taxpayer Identification Number issued to them by the IRS.”

And what about the decades in which millions of illegal immigrants have actually lived, worked and raised families within the United States?

There are also various stereotypes that target immigrants as being an invading force.

This ridiculous assumption is what Luis Gutierrez is fighting against. Since the beginning of his political career, he has attempted to show that illegals are the backbone of American society, and it is time to show them respect and acceptance, instead of negligence and discrimination.

It is no secret that many undocumented workers exist and are the workforce for many low paying jobs across the United States. They can be found picking your vegetables, cooking your food at the local diner, and repairing your car at the brake shop. But, strangely enough, with all the rhetoric about the invading force that immigrants are supposed to be, somehow they manage to find employment and survive without government assistance because one major myth about illegal immigrants is that they come here to use welfare, but using welfare is certainly impossible without documentation.

The only government handout for them is public education for their children (who had no choice in coming to the United States.) Yet for decades, American business owners who hire immigrants seem to continue getting away with hiring a cheap labor force.

Where is the public outcry against business owners who hire them? If it weren’t for them, then immigrants would not have come here in the first place.

The public outcry against immigrants strangely seems to be closer to discrimination and fear of outsiders, which is not new in American history. The only reason there is a push to keep immigrants illegal is not only to deport them, but also to keep a cheap labor force.

There is too much money being made on the sweat of immigrants who are paid below minimum wage.

Businesses (who enjoy lobbying Congress) want this system of purgatory for immigrants, so some will get deported, but many stay and work hard for very low pay, and only a few manage to afford citizenship.

Americans seem to forget that this land (that was stolen from Native Americans) was founded by immigrants, and everyone born here is descended from immigrants. And didn’t the United States steal the Southwest from Mexico in the Mexican-American War as well?

No matter what logic is used against the illegal immigrant fear, there will always be enough fear for mongers and people who lack critical thinking to persecute a group just because it is different.

There is no harm done to the United States by immigrants, only benefits. If the huge amount of 15 million illegal immigrants contribute so much good to American society (and we obviously let them), then why should their voice be unheard if they want to become citizens?

Thankfully, men such as Luis Gutierrez are a voice of representation.

During the NEIU presentation, he expressed major disappointments with the last two Congresses that failed to pass Immigration Reform. However, he also expressed hope for the future, especially for the children of Latin immigrants and said, “The first Latina/Latino American president is already born, already among us.”