2012: The Awakening of the Sleeping Monster of Global People-Power 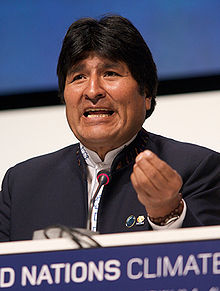 In recent years, the Mayan script has been decoded and great advances have been made in our understanding of Mayan culture. This has inspired a renewal of interest in Mayan spiritual traditions, and has also called to our attention that the last day in their calendar was our winter solstice (Dec 21) of 2012.

Our current 20-year Mayan calendar period or katún, from 1992 – 2012, is known as the Time of No-Time since these were the last years of the sun’s 5,125 year cycle in the Mayan calendar. Mayan elders believe that there had been many humanities before us and that the fifth humanity would emerge on this day from the ruins of the previous one.

There have been innumerable doomsday predictions. For instance, the pastor of an early Christian American sect known as the Millerites convinced his flock to await the end of days on April 28 of 1843. Some of his followers sold everything they had and gathered on a hill to await Christ’s return. When nothing happened, the pastor announced a new date, Dec. 31, 1843, then March 21, 1844, then Oct. 22, 1844. Eventually, the disciples distanced themselves from Miller and renamed themselves the Seventh Day Adventists while others became Jehova’s Witnesses. These groups have continued to postpone the date and turned fear-based doomsday predictions into a tradition.

More recently, homophobic preacher Harold Camping squandered millions on doomsday propaganda that assured his followers that the world would end May 21 of 2011 and blamed gays for everything he perceived to be wrong with our planet. When God failed to exhibit his wrath, he postponed the date to Oct. 21 of 2011, and when nothing happened, the fraudulent preacher stopped playing God’s ventriloquist and receded into irrelevance. He failed to offer a money-back-guarantee to his donors.

It’s difficult to understand why some people get so easily seduced by doomsday prophecies: scientists have advised us that the sun is not scheduled to expand, swallow the Earth and explode as a super nova for at least another 3.5 billion years. Unless a comet hits before then, humanity should be fine and will probably have migrated to other planets by then.

One theory is that certain generations are more vulnerable to mass hysteria: this was certainly the case when the black plague killed a third of Europe and many people believed the end was near. Our generation has seen an increase in populist uprisings throughout the world.  Increasing poverty in the US may also contribute to the phenomenon, as more people turn to faith for consolation.

Perhaps humanity does need some form of controlled outlet for its repressed violence and anger just as volcanoes serve to vent the repressed magma within the Earth, and art can be explained as one such civilized, tamed, acceptable outlet. But it would be unfair to say that all of the discourse around 2012 is fire and brimstone. 2012 is an indigenous American cultural phenomenon and its relevance must be understood within an indigenous and neo-indigenous context. No assessment of 2012 would be fair and complete without the voices of indigenous peoples.

There have been several Pan-American Gatherings of the Elders in Perú, where indigenous shamans and leaders from the entire hemisphere have come together in mountains in the Andes that have always been considered sacred to seek visions and are weaving a new continental myth-making tradition centered around the prophecy of the condor and the eagle. The elders say that when the condor (South America) and the eagle (North America) are seen flying together; there will be peace on Earth.

There are other hope-filled indigenous prophecies, most notable among them the Warriors of the Rainbow prophecy which emerges from the Hopi tribes and which the indigenous Bolivians associate with their rainbow flag. The Rainbow Warriors are said to be light-workers who will come from all the tribes and languages of Earth at a crucial time of near-destruction and will teach people through deeds, not words. They would help the spiritual traditions of the red man to reemerge within new cultural paradigms after 500 years of repression and marginalization.  Invariably, these traditions reflect cooperative, egalitarian, community-based values and models of human interaction.

We of the last katún of the Mayan calendar are the generation that saw the first indigenous president ever in Bolivia, Evo Morales, whose first ceremonial act as president was to make a humble offering to Pachamama (Mother Earth) and whose nation was the first on Earth to pass a law granting rights to Mother Earth. This happened after all the water in Bolivia had been sold by the previous neo-liberal regime to one American corporation, Bechtel, and it had become illegal for indigenous and poor Bolivians to even gather rainwater. The water wars ensued in Bolivia, where people died on the streets to take back their access to the water that fell from the sky.  In the end, the people won and Bolivia’s water is now in public hands again. While this was all happening, the water wars were not mentioned in U.S. corporate-owned media.

And then, of course, we had the Arab Spring, the Indignados, the Occupy movement and similar populist ones focusing on the 99 percent effectively changed the discourse and countered generations of corporate, elitist and political propaganda and tyranny.  This global awakening is exacerbated by the fact that we were cast into the information era in an evolutionary blink of an eye.  We’re all rapidly reinventing ourselves and re-contextualizing ourselves in the midst of more changes within one generation than any other group of humans has seen.  Global access to the internet did not even exist twenty years ago.

Thomas Jefferson once said ‘When the people fear their government, there is tyranny; When the government fears the people, there is liberty.’ There is a sign that one would see at the boundary of the autonomous territory of Chiapas that reads: “You are in Zapatista Rebel territory. Here, the People Command and the Government Obeys.” It is there that the Mayans originally made their home.

Indigenous groups have always been community-oriented, collectivist cultures and in Chiapas today all decisions are made communally, by vote and by consensus. Chiapas has become a model of decentralization of power and participatory democracy, and of course a huge challenge to the power of the corrupt Mexican state. Post-insurrection Chiapas remains a stateless society where the mothers and grandmothers make sure that no one goes hungry, without an education or any of the basic requirements for human dignity.