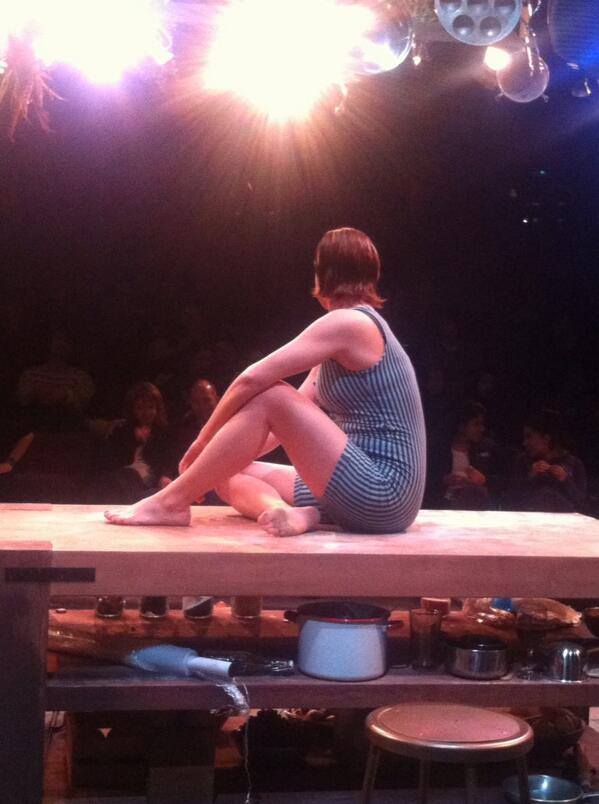 If there is one thing that Stage Center Theatre knows how to nail every time, it’s being unique.

NEIU’s theater has a certain reputation for infusing its own brand of charm and creativity in its plays. For better or for worse, the Stage Center Theater creates performances unlike any others in the city. “Miss Julie,” authored by playwright August Stindberg, is no exception.

The entire play takes place in the kitchen of an unnamed count. Here is where the seductively aristocratic Miss Julie, played by Heather Chilson, flirts and spars with charming servant Jean, played by Jill Matel.

Though the play’s main plot pieces revolve around the tense and constantly escalating relationship between Miss Julie and Jean, Jean’s fiancée Kristin, played by Nicolena Sellen, breaks up the action with a set of scandalous monologues.
Occasionally injecting more sensual flavors to the performance are the three raunchily wardrobed chorus members who will sing to, dance around, and occasionally feed audience members.

From the onset, Stage Center Theatre’s production promises on a sensual experience. Before the show even starts, the chorus mingles and flirts with audience members. Throughout the show, aphrodisiac candies such as habanero infused cotton candy, merlot jelly bits, and chocolate covered oysters are served.

The physical interactions between the three named characters range from wistfully lustful at its lowest; characters will brush up against each other, wink and place their hands a little farther south than appropriate. At its highest, these interactions fall just short of pornographic; characters hum and moan with hands going up skirts and heads landing right in between a pair of legs.

The chorus handles a large part of the show’s musical aspect. The trio performs several songs with vocals, guitars, and a tiny piano at various moments in the play. They’re quite different from the rest of the play, as they’re usually more fun than sexy. However, without any amplification, the instruments sometimes overpower the actors’ vocals, making some songs more work than fun to listen to.

They also have some playful moments breaking up the tense interactions between Jean and Miss Julie. One particular scene had all three jump up on the kitchen table and perform a pseudo-acrobatic group grope; it’s only deterrence was the squeaky table underneath them.

Unfortunately, delivering on this sensual promise sometimes means that tone and themes of power take a back seat. Ultimately, “Miss Julie” revolves around the constant transfer of power. Miss Julie and Jean go back and forth in a struggle to have power over each other. But there are times when this struggle becomes diluted in a performance already heavy with intense eroticism.

For example, there is a certain moment when Jean flips from the callous rogue to an almost babbling coward at the sound of a bell. Though a powerful flip, it’s hard to buy when Jean is such a horn-dog for any other part of the performance.

The burlesque styling of the performance is not only an excuse to make audience members blush. Stage Center Theatre’s performance largely manages to explore and convey the violent and explosive relationship between Miss Julie and Jean, while delivering it with a sultry tone. Inconstancies aside, “Miss Julie” is more than just a theatrical one-night stand.