“Tiny Beautiful Things” A Love Letter to Theater and Life 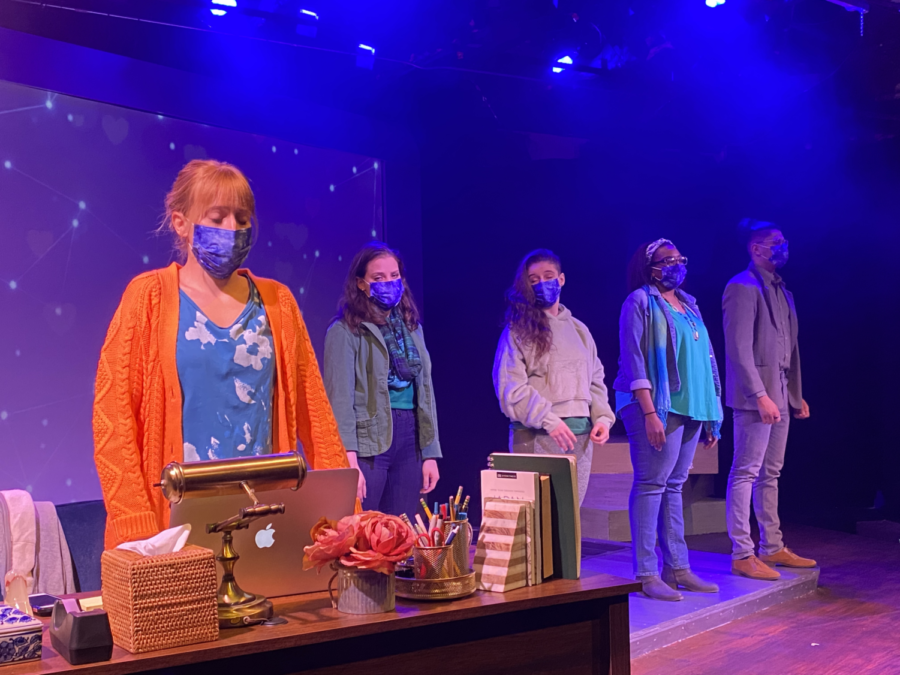 I just saw a play that left me speechless and I have to write a review. Where do I start?

Perhaps the easiest thing to do is start telling your readers that to fully understand you, they can’t miss the new play presented by NEIU Stage Center Theater “Tiny Beautiful Things.” There is still time to reserve free tickets for NEIU students, alumni, and staff, for Friday, April 22 at 7:30 pm and Saturday, April 23 at 2:00 pm and 7:30 pm.

Then you can continue talking a bit more about the plot (but not too much!). You can say that the play is based on the real letters that were sent by the readers of the online magazine The Rumpus between 2010 and 2012 to Sugar, an anonymous advice columnist that was actually Cheryl Strayed, a best-selling writer. Some of those letters were compiled into a book that later, with the adaptation of Nia Vardalos, was transformed into a play that, since its off-Broadway premiere in 2016, has deeply moved viewers.

That sounded a bit corny … I think you have to better explain what makes a play about letters interesting and special. What is particular about the letters that Sugar receives is that they cover almost the whole scope of human emotions, feelings, and troubles … from authentic hilarious teasings, adolescent problems, and love-related dramas, to dark traumas and mourning for the loss of a loved one. Everybody can see themself reflected in one way or another in the problems and questions of the people who come to Sugar for advice or simply to let off steam. The common thread—everyone wants to feel heard and accompanied in the loneliness of pain and doubts.

Sugar, for her part, only responds to a few of the hundreds of letters that accumulate in her email inbox. Her judgment is highly selective and subjective: “I’ll answer anything, so long as it interests or challenges or touches me,” she says. But what is it about her replies that so many would seek to receive a text from her? Radical empathy. Sugar does not avoid or try to keep light on the pain, worries, or suffering of those who write letters. She goes down with them into the mud reliving her own experience and the times she felt thwarted and lost, but also how she got up from the ground, brushed off her clothes, and kept walking. However, Sugar does not deprive herself of giving general advice, with a certain aphoristic touch that does not restrict the freedom of her recipients. Though maybe it is not the kind of advice we are used to hearing in bland self-help books. Things like “don’t be afraid to break your own heart,” or “Write like a motherfucker.” are the finishing touches to some of her responses.

Ok, I think that is enough about the plot (remember no spoilers). It’s time to write about the NEIU Stage Theater Center version of the play. The curtain opens and Sugar played by Hannah Barbeau appears sitting at her desk, but…wait a moment! Is that a giant computer behind her? A giant cup of coffee? A giant pile of post-its? Yes, the entire play takes place on a giant desk with a tiny desk on it—and I think that is wonderful. Different scenarios are projected on the computer screen allowing for a change of scenery and to visualize what the writers of the letters and Sugar experienced or imagined.

As for the letter-writers represented by Sade Cooley, Elizabeth Sacha, SaraJane Fein, and Xavier Becerra, you cannot fail to mention their brilliant performance in which they not only got into the skin of a single character but of different letter-writers. Their performance of the most disparate stories and experiences on stage with very few changes in their outfits is really outstanding. Not only are their stories and feelings shifting, but also their attitudes towards Sugar, that change from suspicion and distrust to sincere and deep gratitude.

To finish, it is worth mentioning the final discussion of the opening night. In plays with a strong emotional charge like this one, it becomes more than necessary to process and reflect on everything that the spectators have seen on stage, but also in some way—thanks to the magic of theater—experienced in its own flesh. For this occasion, the cast and director Leslie Hull were joined by Michael McPartland from Student Counseling Services who brought a mental health perspective to the conversation.

Ok, and for the final drum roll, you need something memorable that sticks in the minds of your readers … try a quote, a powerful quote like… for Leslie Hull, this is a necessary story that can help to feel and heal from the wounds of the current times. “This play just struck the core of me. It was a love letter to theater, to our community, and to our students really just like the humanity that we needed at the end of this really just arduous, dragging, the drudgery of change, heartbreak, and loss. It hits all those bells for me because I feel like that’s what theater job is, is to comfort you and hold you, to make you feel something.”

I think that could work, but if something left you speechless words are useless, so just tell them to go there and make up their own mind. Probably like you, in the end, they will also have a letter to write.