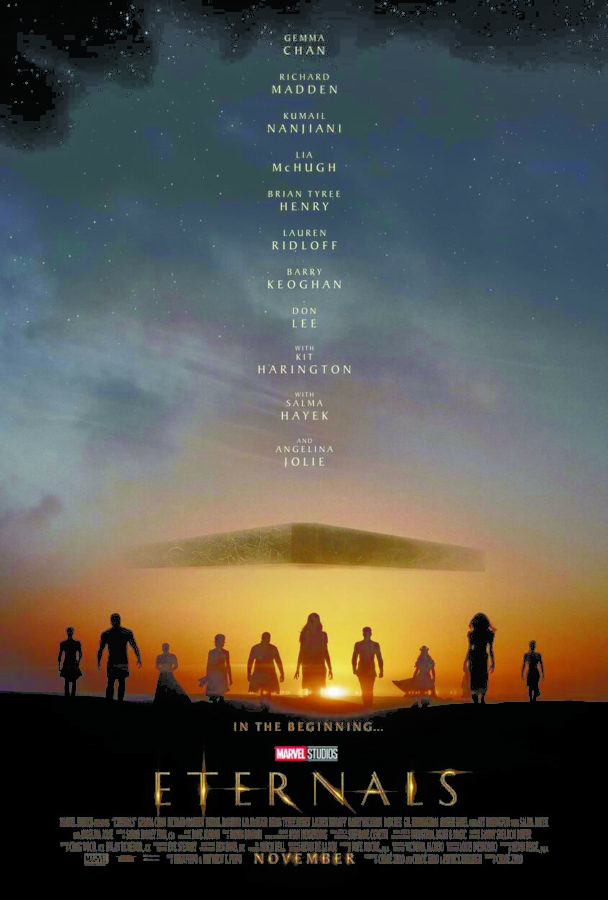 Eternals (2021) is a new Marvel movie about a group of super beings known as Eternals who were sent to Earth thousands of years ago by the Celestial called Arishem, a Celestial ancient being, in order to protect humans from these dangerous predators, called Deviants. While the mission seemingly ended centuries ago, all of the Eternals still remain on Earth.

The Eternals were led by Ajax (played by Salma Hayek), whose main power is healing wounds. There are two distinct functions in the group; those that are focused on the side of science and other things involved with long term progress, with the other more powerful members centered on defending and protecting the Earth. Those that fall in the former are Ajax, Sersi (played by Gemma Chan) who can transform matter into different forms, Phantos (played by Brian Tyree Henry) who can control technology and processes a brilliant mind for invention and Druig (played by Barry Keoghan) who has the power of mass mind control. Those that fall in the latter are Ikaris (played by Richard Madden) the most powerful of all the Eternals, Sprite (played by Lia McHugh) who can create illusions, Kingo (played by Kumail Nanjiani) who can shoot cosmic energy out of his hands, Gilgamesh (played by Don Lee) who is the strongest Eternal in terms of brute force and can project an exoskeleton of cosmic energy, Thena (played by Angelina Jolie) who can create weapons made of cosmic energy, and Makkari (played by Lauren Ridloff) who is the fastest Eternal.

We follow Sersi and Sprite in London as Sersi works as a teacher with her boyfriend Dane Whitman, and lives life as a human. We are promptly introduced to a Deviant when it comes to attack Sersi and Sprite in the middle of the thames. As luck would have it, Ikaris arrives to save them from harm, after, as we later learn, not seeing Sersi and Sprite for 2,000 years.

Throughout flashbacks that coincide with Earth’s history, we see how the Eternals work as a team as well as seeing how they feel about humanity. Contrary to their mission, which was only to protect humans from the Deviants and not to interfere with humanity’s progress, several of the Eternals show a clear love for humanity and wanting to help, even if it goes against orders from Arishem.

All of the characters that were a part of the team were amazing. They all felt unique,  with different personalities and goals in mind. Not since Endgame, have we had a large roster of active characters throughout a Marvel movie.

With that said, there were a few things about this movie that stood out to me.

As this film is only 2 and a half hours long, there isn’t enough time for characters to breathe. While the movie has 10 Eternals, Makkari, Phantos and Kingo are not given a well developed arc as with some of the other characters. While there is a liveliness in those characters in their backstory, they were not reintroduced until later in the film. Kingo has more of a comedic double act with his valet and decades long friend, Harun (played by Harish Patel), which is not a bad thing, but it is at the expense of other things related to the Eternals. Makkari and Phantos do go through some character development, but not as much as the rest of the team.

This film is visually beautiful, which makes the flashback scenes about Earth’s history stand out even more. One of them that really amazed me was that of the scenes in Babylon, with the long overhead shots of the city, as well as the scenes at night with Sprite’s illusions. The scenes in Tenochtitlán are also notable by showing the carnage the Spanish did to the Mexican Aztecs.

I want to watch this movie again, I will be there for the inevitable sequel. What about you?

You can currently watch Eternals in theaters, and will later be released on Disney Plus.