“Friends till the End” 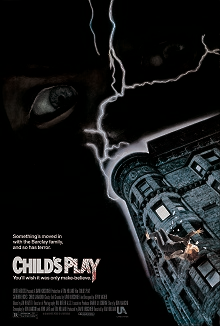 Hello there boils and ghouls! Since this is Halloween month, it’s the time of year where you want to be scared.  If you are in the mood for an old classic , take a look at a horrendous, holding-on-to-the-edge-of-your-seat horror movie.

“Child’s Play(1988)”, the first movie in the Chucky franchise, is a spooky supernatural film about how Charles Lee Ray, a notorious criminal, is gunned down in a toy store which exploded soon afterwards. Due to a vendor of stolen goods, Karen Barclay, a single mom, found a “Good Guys” doll box from that store that she decided to present as a gift to her 6-year-old son Andy. In the days that follow, a series of murders happen around Karen, with the only possible culprit being her 6-year-old son.

This is a notable film in many ways. To date, it is the only film in the series that is both set and filmed in Chicago. This film uses a lot of notable practical effects for several of the scenes involving Chucky, either by a stunt double for some of the scenes or the real-life doll for ascene near the end of the film. While the actor that plays Andy appears in later movies in the series, the actor was only 7 years old when he performed as the character, who was depicted as being 6 years old in the film itself.

As one of the first movies of the Chucky franchise, it feels like a breath of fresh air to have a sense of mystery. Throughout this film, there is a lot of set up to have Andy be seen as the killer. While later films in the series have Chucky as this wisecracking killer doll with pop culture jokes, this is one of his most menacing portrayals.

While this film is rated R, it’s not too bad by today’s standards. This is still a film you wouldn’t want to watch with your actual 6 year old kid. But watch it all the same.

You can find “Child’s Play” on Prime Video, and wherever the film can be rented or purchased.