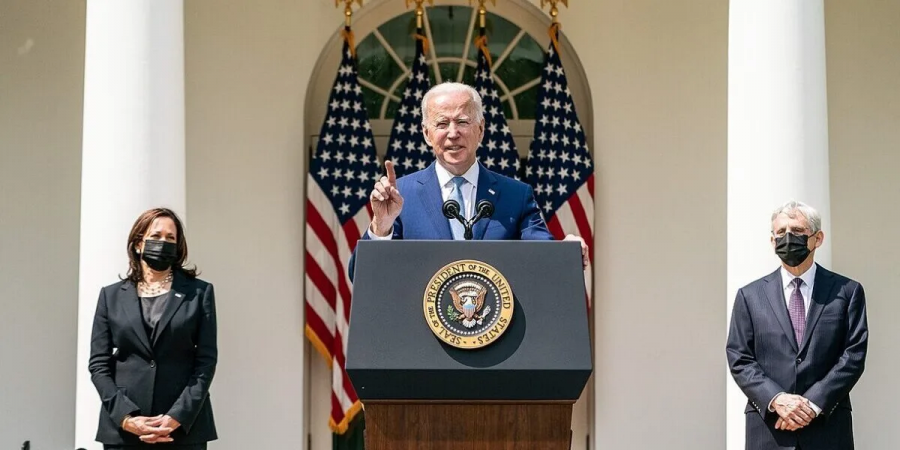 Image via The White House/Wikimedia Commons

President Joe Biden delivered remarks indicating his belief that our constitutional amendments are not concrete while announcing his plans for increased gun control in a White House Rose Garden briefing on Thursday, April 8. This sentiment should worry all civil rights advocates, regardless of partisanship.

Some of President Biden’s gun control proposals are easy to get behind, like his call to require background checks and add serial numbers for what are called “ghost guns” — guns that are sold in pieces or in a kit and assembled at home.

Others are more difficult to support, like President Biden’s suggestion of expanding the gun modifications covered in the National Firearms Act (NFA) to include stabilizing braces like the one used in the recent Boulder, Colo., mall shooting. One of the NFA requirements is that purchasers pay a $200 fee when buying specified modifications and firearms. This $200 fee acts as little more than a way to restrict the poor from purchasing modifications for firearms and should not exist, but this is for another time.

What was really worrisome in President Biden’s remarks was his dismissal of the rigidity of the constitutional amendments.

“But no amendment — no amendment to the Constitution is absolute…you can’t [yell] “fire” in a crowded movie theater and call it freedom of speech,” said President Biden.

The First Amendment says, “Congress shall make no law respecting an establishment of religion, or prohibiting the free exercise thereof; or abridging the freedom of speech, or of the press; or the right of the people peaceably to assemble, and to petition the government for a redress of grievances.” This is an absolute rule, one that prevents Congress from making any law that restricts the free expression of religion, speech, the press, and peaceful protest.

In President Biden’s example of why even the First Amendment is not absolute, he misquotes the bloated “fire” analogy, which begins, “The most stringent protection of free speech would not protect a man in falsely shouting fire in a theatre and causing a panic[…]”

This was provided in 1919 by Justice Oliver Wendell Holmes in the ruling opinion for Schenck v. United States. Charles Schenck, the general secretary of the Socialist Party of the United States, was convicted under the 1917 Espionage Act — the same act being used to charge Wikileaks founder Julian Assange — and sentenced to 30 years in prison for distributing leaflets urging citizens to resist the draft to protest the United State’s involvement in World War One.

This case should be viewed as the national embarrassment it was, not inaccurately referenced and weakly grasped at by those who wish to use it to justify censorship, or other forms of unconstitutional restrictions. As noted by Trevor Timm in a 2012 Atlantic piece titled “It’s Time to Stop Using the ‘Fire in a Crowded Theater’ Quote,” Schenck v. United States was overturned more than 50 years ago in 1969. Not only was this case overturned, but the analogy was wrong in its inception. These pamphlets were not equivalent to “falsely shouting fire in a crowded theatre.”

As the late Christopher Hitchens said in a 2006 speech at the University of Toronto, “It could be just as plausibly argued that the Yiddish speaking socialists, who were jailed by the excellent and over-praised judge Oliver Wendell Holmes, were the real fire-fighters – were the ones who were shouting fire when there really was fire in a very crowded theatre indeed.”

This disregard for the protections afforded to the people by the amendments to the Constitution is something that should concern us all. Though this perspective does much to explain President Biden’s failed 1994 push to enact a counterterrorism bill he authored that would go on to become the foundation for the infamous Patriot Act.

While it is true that President Biden has nowhere near the vitriol of former President Trump, he has a similar urge: to restrict the peoples’ freedoms afforded by the Constitution in the name of safety. Some of these rights, like free speech, are under a bipartisan attack, while others are attacked along partisan lines — guns by Democrats and voting by Republicans. We should recognize what these politicians don’t, that these rights are, as Thomas Jefferson wrote in the Declaration of Independence, “inalienable.”