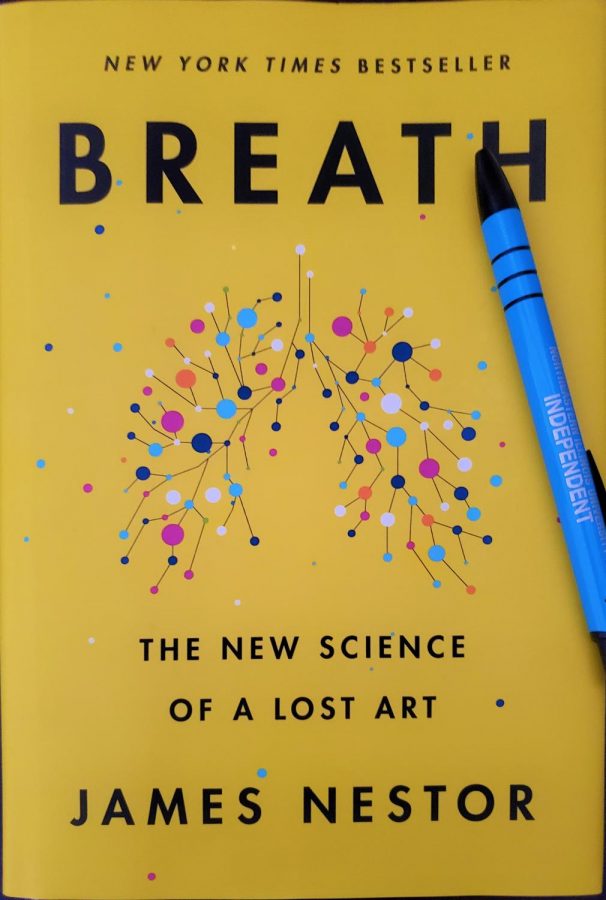 Breathing Better in a Respiratory Crisis

In the midst of a respiratory pandemic there is urgency in learning how to breathe better. At a modest 214 pages, science journalist James Nestor’s most recent book, “Breath: the New Science of a Lost Art”, is a good, quick read for those interested in ways to breathe better. Nestor has written for publications including The New York Times, The Atlantic and Scientific America, and his previous book, “Deep: Freediving, Renegade Science, and What The Ocean Tells Us about Ourselves” was an Amazon Best Science book of 2014.

Areas of focus in “Breath” include, but are not limited to: mouth breathing, alternate nasal breathing, exhaling, heavy breathing, and industrialization’s impact on jaw size and breathing. It previews Pulmonaughts — a term for those who explore the effects and limits of breathing — such as Soviet-Ukranian scientist Konstantin Pavlovich Buteyko, choir conductor Carl Stough, former opera singer Alexandra David-Néel, and Dutch extreme athlete Wim Hof.

Published in 2020, it explores both the ancient and recent history and the science behind breathing. The book is divided into three distinct parts. The first focuses on an experiment testing the physiological differences between breathing through the mouth or the nose, which Nestor volunteered for. Nestor says of the mouth breathing phase of the experiment, “Each night for the past week and a half, I’ve felt as if I was getting softly choked to death in my sleep and my throat was closing in on itself. Because it is, and because I am.” The second part is about what history and science are teaching us about breathing today. The final part, on various extreme breathing techniques used to hack the nervous system, often involving excessive breathing.

Nestor draws connections to people’s breathing and some chronic ailments such as asthma, ADHD, depression, emphysema, and even aspects of schizophrenia. Emphasizing that breathing is not a cure all, Nestor explains how breath-work can reduce — or in some cases eliminate — chronic ailments. From alternative nasal breathing for reducing schizophrenic episodes to Holotropic breath-work for reducing anxiety and other problems, breathing exercises have promising early scientific evidence in reducing many modern chronic diseases.

One of the major contributing factors to the deterioration of breathing, claims Nestor, is our industrialized diet. As food became softer and the time it took to chew food decreased, so did the size of our jaws and nasal cavities. Waning chewing stress resulted in our jaws musculature and bone mass shrinking, much like how in space bone mass is lost because of a lack of stress on the skelature. While exploring the catacombs of Paris, Nestor notes how the skulls of those buried before the rise of industrialization had fewer cavities and less dental overcrowding. He also points out that current populations without access to industrialized diets do not have our problems of dental overcrowding. Recent evidence supports the importance of chewing stress on the development of the skull and that today’s assembly line orthodontics compound jaw shrinkage by forcing the teeth into alignment instead of providing the necessary room for the teeth to come in straight on their own. Nestor even explains how Dr. John Mew invented a retainer designed for children between the ages of 5 and 9 called Biobloc and according to a 2006 study it expands the palate creating more room for teeth to grow — and consequently the nasal cavity — by up to 30% over a six-month period.

To anyone struggling with, or who knows somebody struggling with, snoring, sleep apnea, ADHD, anxiety or any of the other numerous chronic health issues associated with bad breathing, “Breath” is a dose of much needed fresh air. For those who are interested, you can buy it through Nestor’s website at Breath — MrJamesNestor. If you are not interested in the book but still intrigued by the science of breathing, Nestor’s website includes a collection of breathing exercise videos and interviews with relevant experts.

There will be a follow-up to this piece investigating the effects of the different breathing practices on the author.