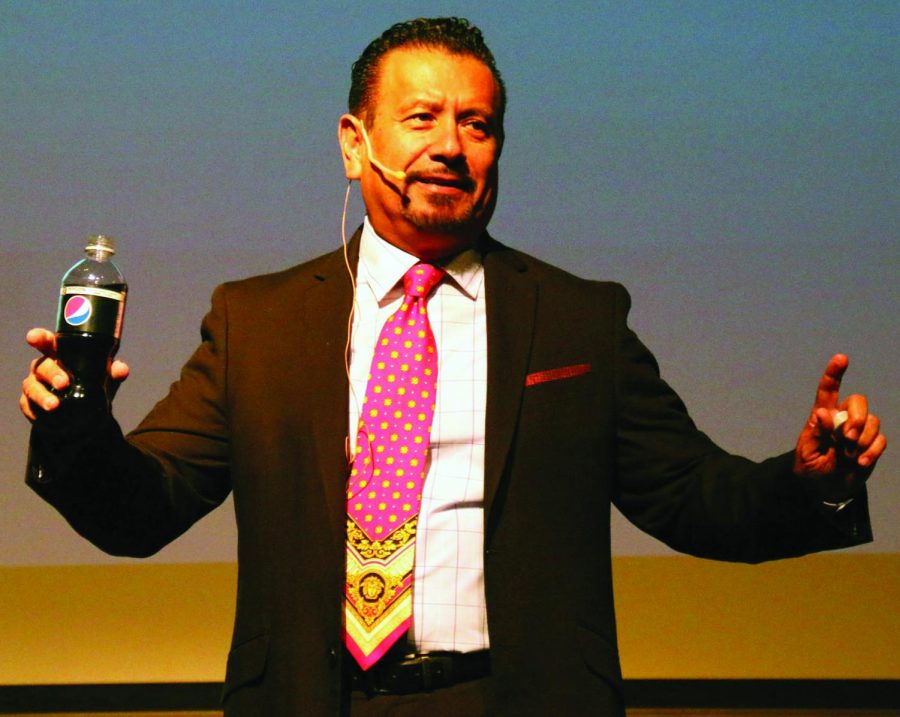 Richard Montañez will be the subject of “Flamin’ Hot,” a biographical film directed by Eva Longoria.

When PepsiCo. Executive Richard Montañez assumed the stage as the speaker for the sixth Daniel L. Goodwin Distinguished Lecture, he spoke with the conviction of a man who has achieved his most ambitious daydreams. His self-deprecating humor shouted forcefully from the Northeastern Illinois University auditorium stage, introduced those in attendance to the humorous side of a man tasked with offering a humbling message of optimism and perseverance. And as Montañez recounted the racial, economic and social trials he endured on his way to prosperity, he did so with a humility inconsistent with his status.

Known best for inventing the recipe that revolutionized Frito Lay’s Cheetos brand into the cultural phenomenon it has become, Montañez detailed his ascent from a “ghetto rich” child from the wrong side of the tracks to PepsiCo executive. But before he became the subject of an upcoming biopic, Montañez was an eight-year-old child struggling to learn English and embarrassed by his inability to conform to a foreign culture.

“Make me a bologna sandwich and cupcake so I can be like the other kids,” recalled Montañez, sharing his story of self-discovery. But according to Montañez, his mother rejected his plea, a rebuke that served as a wake up call for Montañez to embrace his heritage.

But Montañez says that as he distributed pieces of a cut up burrito at school, he learned to appreciate the power of novelty.

“All you need is one revelation to create a revolution,” yelled Montañez, a coy smile creeping across his face. “I was never created to fit in, I was created to stand out.”

Montañez detailed his untraditional route to the stages of NEIU, Harvard University and Notre Dame. A high school dropout, Montañez is a self-described entrepreneur. Once unable to read or write, Montañez is now a best-selling author in the process of writing his second book. He’s set to be the subject of an Eva Longoria-directed film chronicling his life. But despite accumulating successes at a staggering rate, Montañez is transparent about the obstacles he faced as an uneducated immigrant looking to make a living.

“No education, I went to work,” said Montañez. “I killed chickens for a living, I worked at a car wash, I was a gardener. I did everything I could just trying to survive. One day my friend rolls up and he says ‘[Frito Lay] is taking applications, go apply Richard.’ And I said ‘oh my god.’ I started to dream. Just thinking if I could get a job at Frito Lay, I could go from the field to the factory. I could change the legacy for the Montañez family.”

Montañez states that he relished his opportunity to determine his family’s legacy, championing his willingness to perform mundane jobs to the best of his ability. When Frito Lay was laboring financially, Montañez says the CEO informed his employees that they could “act like owners.” According to Montañez, he used the opportunity to penetrate the sales floor, volunteering uncompensated labor in exchange for guidance. It was Montañez’s ability to discover inspiration in the unexceptional that opened doors for him.

“One of the greatest revelations in PepsiCo was about to take place,” said Montañez. ‘[The salesperson] couldn’t see it. What did I see? I saw the spices, I saw the chile racks. Everybody out there likes spices, but [Frito Lay] wasn’t in that category, wasn’t in that business. So I got it. We’re going to get Frito Lay into the spice game.”

Montañez cited both his ignorance toward protocol and unwavering determination as an engine for his success. Undeterred by procedure, Montañez says he called the CEO of Pepsi from his wife’s cell phone, laughing in retrospect about the risks associated with such a daring move. But according to Montañez, had he not found the courage to introduce his vision or simply went through the chain of command, unfounded fears would result in squandered opportunity. It only took Montañez one instant to go “from being a janitor to being an executive.”

“I was floating, I did,” said Montañez. “The uneducated janitor just spoke to the CEO.”

Underneath Montañez’ humbling humor and animated demeanor lay a narrative of self-motivation and relentless perseverance. His message was clear: remain steadfast in your own ability and opportunity will arise. “Don’t allow anyone to put you down or prevent you from realizing your dreams,” said Montañez.

Montañez warned that once that opportunity presents itself, it is up to us, the student body of Northeastern Illinois University, to grasp destiny with the vice grip befitting of a leader. And along the way, don’t be afraid to fail or look ridiculous.

“I wanted more,” said Montañez, referring to his desire that shaped his youth. “I wanted to take that chance. I was hungry. Hunger is the antidote for fear. When you’re hungry, fear will leave. “