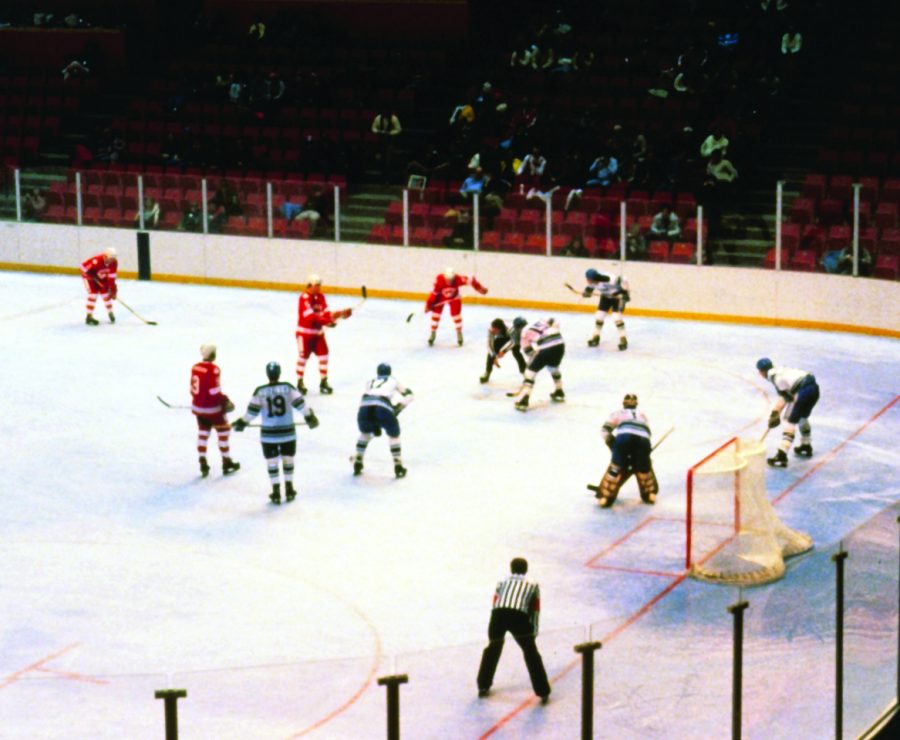 “Right now” – Herb Brooks, coach of USA Hockey, was screaming at his young players – “You are playing like the middle of next month!” Every day they got worse, he told the team — a ragtag bunch of former Golden Gophers, Boston University Terriers and the assorted castoffs of several Upper Midwest college teams — and now they were playing as bad as he’d seen. The United States had just managed a 3-3 tie in an exhibition game against Norway, one of the weakest teams still eligible for the Olympic tournament, and Brooks was angry. The former University of Minnesota coach kept his team skating drills long after the last fan had left the arena. And when the rink’s maintenance man said he was closing up, Brooks told him to go ahead while he kept his team on the ice, skating back and forth in the dark. As of Sept. 17,  1979, no player or coach could imagine that, five months later, they would see the light at the end of the tunnel.

At the top of a podium.

The late 1970s were a difficult time for Americans. There was inflation and disconcertingly high gas prices. The Vietnam War ended absent of victory, instead producing nearly 60,000 casualties. Richard Nixon resigned the presidency due to his stunning involvement in the Watergate Scandal.  Fear of the Soviet Union was growing; in December of 1979, the Red Army marched into Afghanistan. For America, it was not a good time, with Americans wondering whether things would ever improve. Few would have predicted that a group of college students could change that atmosphere and boost national morale.

The U.S. and the Soviet Teams hockey teams arrived at the site of the 1980 Winter Olympics in Lake Placid, N.Y. under very different manners. The Soviets paraded into town like the world conquerors they were– the Soviets had won four straight Olympic Gold Medals, with a combined record of 22 wins, one loss and one tie. They were the best hockey team in the world, indiscriminate of rank.

Though the existing rules at the time mandated that players retain amateur eligibility in order to qualify for the Olympics, the Soviets fielded a professional-caliber team. Nearly every Soviet player had already played in previous Olympic games. Right winger Boris Mikhailov, a 10-year veteran, was flanked by fellow veterans Vladimir Krutov and Sergei Makarov, the latter being the all-time Soviet points leader. Backing them up was Vladislav Tretiak, arguably one of the greatest goaltenders of all time. In February of 1979, they defeated the NHL All-Stars in a three-game series at Madison Square Garden in New York City.

Meanwhile, the United States had only made it to the medal round once over the previous four Olympics. Although they won a Silver Medal in the 1972 Winter Olympics, the team had finished fifth, sixth, and fifth respectively in 1964, 1968, and 1976 Olympics. The gold medal won by the unheralded 1960 U.S. team in Squaw Valley, Calif. – the last time the Winter Olympics had been held in the United States – looked about as relevant as the Wright Brothers did to the pilots of the Space Shuttle. Few now remembered that team – and even fewer remembered that the last man cut from that team’s final roster before the big trip to California was a scrappy young player by the name of Herb Brooks.

Brooks would eventually get into coaching, guiding the Minnesota Golden Gophers to three NCAA championships in the 1970s. After that last win, in the late winter of 1979, Brooks was named head coach of the U.S. Olympic team. He began building that team with the core of his championship Gophers: Mike Ramsey, Rob McClanahan and Neal Broten. Another set came from perennial hockey powerhouse Boston University, who contributed key pieces such as Dave Silk, team captain Mike Eruzione and goalie Jim Craig. Other players – such as Mark Johnson, John Harrington, and Mark Pavelich – came from a sprinkling of Midwestern colleges and universities. They were the youngest team in the tournament. Few would ever become professionals.

In preparation for the Olympics, the U.S. played 60 exhibition games and compiled a record of 42 wins, 15 losses and three ties. Entering the Olympics, the Soviets had won 43 of 44 games, the previous four Olympic Gold Medals and were believed to have a better team than the previous gold medal rosters. On Feb. 8, 1980, the two squads met for the first time in an exhibition game at Madison Square Garden, where the Soviets triumphed the year before. Before a home crowd monopolized by American hockey fans, the Soviet Union embarrassed the United States by a score of 10-3.

Eruzione captured the opinion of most hockey fans when he said in an interview before the games began that: “If you had to pick us, I think we would probably be picked fifth.” The United States opened against Sweden, which was one of the favorites to win a secondary medal. With under one minute left in the final period, the Americans trailed 2-1 before pulling their goalie for a sixth attacker. Bill Baker scored to tie the game at two, hardly realizing that without that game-tying goal, Brooks’ hockey orphans may not have even made it to the medal round. They then faced a Czechoslovian team who was favored to win a medal. In what was at the time considered an upset, the Americans beat the Czechs 7-3. All of a sudden the United States had weathered their two toughest opponents with one win and one tie.

After a tough opening stretch, the United States. was favored to win their next three games. They easily dispatched of Norway and Romania by a combined score of 12-3. However, in their final game before the medal round against West Germany, they trailed 2-0 after one period. Depending on the outcome of adjacent games, Brooks’ little band stood to miss out on the medal round. But the Americans stormed back with two goals in both the second and third periods to win 4-2, placing them in the medal round alongside fellow group member Sweden.

One considered a tremendous underdog, the Americans used their plucky spirit to shed the perception of being poorly equipped to compete with the favorites of the 1980 Olympics. Part two of this two-part series will be available in the next edition of the NEIU Independent.