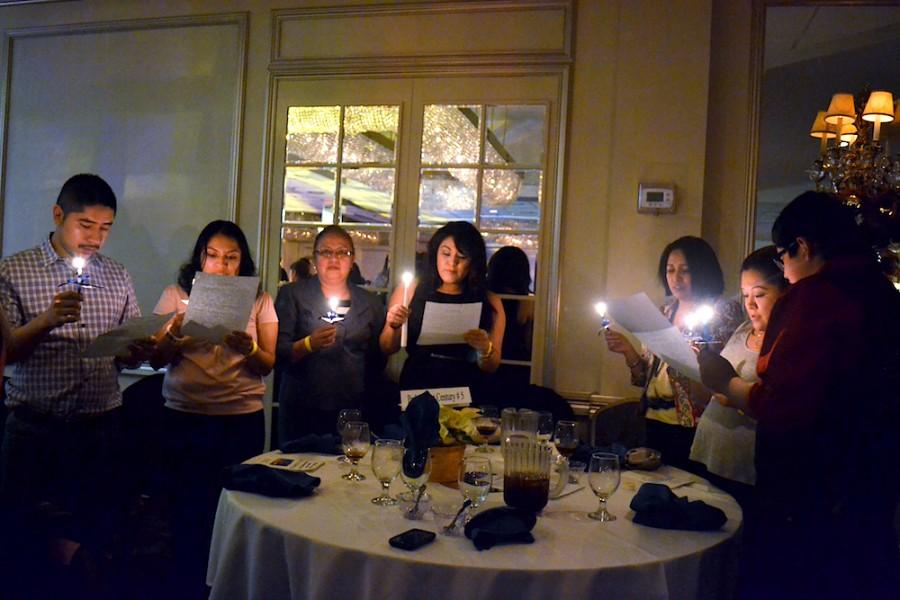 Culture and history was vibrant during ASPIRA’s initiation ceremony, Areyto(ah-ray-toe). Members of ASPIRA, or “Aspirantes,” meaning individuals that aspire, gathered last Dec. 16 at Biagio’s Banquet with performance and storytelling to celebrate their cultural past and also the future.

ASPIRA Inc. of Illinois, a Puerto Rican non-for-profit organization, provides Latino youths with an outlet for cultural and educational growth, and has clubs in 33 Chicago Public Schools. ASPIRA has also expanded to suburban schools such as Oak Park and River Forest High School.

The event kicked off with a dinner and each table held different ASPIRA clubs from schools such as Lincoln Park, Lane Tech, Haugan Middle School and Roberto Clemente.

Chief Youth Development Officer Ivette Nieves, said that one her favorite parts of being involved with ASPIRA is how they help the lives of young people.

Parent Coordinator Ana Sanchez, explained how students who are apart of ASPIRA have the opportunity to explore together. Sanchez also expressed that ASPIRA is a safe place for students to preform and grow.

Throughout the night, the tables held conversation and the occasional banter, which showcased how being a part of ASPIRA allows youths to belong and form strong bonds with their peers.

Alise Lopez, president of the Lincoln Park ASPIRA club, said that it gives members a chance to help people. Lopez explained that by helping others, members learn that “it’s not all about you.” Lupita Carrasquillo, vice president at Lincoln Park said that ASPIRA is like “another family,” and provides a “platform to be activists.”

After dinner was over, the Areyto ceremony began. The Areyto was a Taino Indian ceremony where songs were sung in homage to those from the past. ASPIRA pays tribute to this history by holding their own Areyto ceremonies in honor of their ancestors.

During the ceremony, Evaristo “Tito” Rodriguez explained the importance of history. “We without history are nobody,” said Rodriguez.

In honor of the Areyto, Lane Tech danced the Salsa. La Borinqueña, the anthem of Puerto Rico was also sung in tribute to the Island.

An important part of the ASPIRA Areyto ceremony is pledging an oath to always be a part of ASPIRA. The bright lighting of the banquet hall was replaced with candle light as students and staff joined together to recite the oath in their choice of English or Spanish. Leaders and advisors from each school lit the candles of their students as they pledged to always strive to fulfill ASPIRA’s missions.

The oath was said in a resounding chorus, but the loudest and most enthusiastic part of the oath was the end when students and staff joined together and said, “Once an Aspirante, always an Aspirante.”

The spirit of being an “Aspirante” continued long after the candles lit out. Towards the end of the event, music filled the room as students danced the Salsa, the Merengue, and even the Cha Cha Slide in celebration of pledging commitment to their ASPIRA family. It was clear that this celebration wouldn’t be forgotten by the students.

To learn more about ASPIRA go to http://aspirail.org