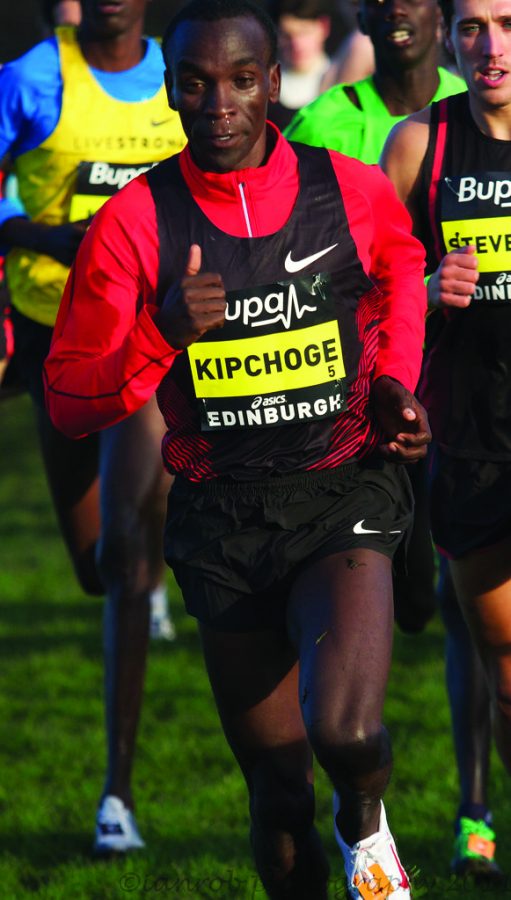 “No human is limited.”

Running a marathon in under two hours has been an elusive goal for many elite runners. Once considered impossible, Kipchoge beat the mark this past October in Vienna, Austria, finishing the marathon in 1 hour, 59 minutes, 40 seconds, proving that no human is handicapped by limitations.

For those unfamiliar with marathon standards, Kipchoge ran at a pace faster than four-and-half minutes per mile, equivalent to 13.1 miles per hour (mph) on a 26.2-mile course. This achievement defines his legacy, earning him recognition as one of the greatest sportsmen of all time. In 2019, he was awarded the prestigious International Association of Athletics Federations (IAAF) Male Athlete of the Year award.

Born and raised to an impoverished family in Kapsisiywa, Kenya, Kipchoge had to run two miles every day to school. He started taking running seriously at the age of 16 when he met trainer Patrick Sang, a former Olympic champion, who he’s trained with for almost 20 years now. Kipchoge started shining in short-distance running before pushing himself to compete in a marathon.

Throughout the entire year, there are six marathons that are considered the World Major Marathons. They take place in London, Berlin, Tokyo, New York, Boston and Chicago. Thanks in part to his strenuous training regime in Kaptagat, Kenya, Kipchoge has won eight of the nine World Major Marathons and he has competed in, often vastly outpacing his competition. Kipchoge demonstrated his value and his capacity by winning the Rio Olympics in 2016 with a time of 2:08:44 in one of the most humid and difficult courses in Olympic history.

After that, he challenged himself to break the two-hour barrier. He first attempted it in 2017 at a project directed by Nike, but finished the marathon in 2:00:24. Consumed by the lure of glory, Kipchoge gave it a second try and achieved the feat, cementing his place as the greatest of his craft.

However, the IAAF does not consider the world record legal because INEOS provided him with 41 pacers. He was also provided fluids throughout the race, further disqualifying him in the committee’s eyes. Still, the sporting world champions Kipchoge as the greatest marathoner of all time.

After collecting every available record, one might think that Kipchoge enjoys a luxurious lifestyle. However, he still lives and trains in Kenya and even cultivates his own food. He is an example of how the greatest athlete in the history of running can remain a humble man who lives in a normal house and cooks for himself, even though he has an estimated net worth of $3 million.

Kenya is a poor country where kids dream to become runners of the future. During his career, Kipchoge has given back to his community, building numerous running tracks around the country to encourage young men to become the fastest long-distance runners in the world.

Since he started breaking records in 2002, he has been one of the most prestigious black athletes over the last two decades. He faces this new decade with many tasks, though his primary goal is to officially break the two-hour barrier in an official IAAF course.

He will try to beat the clock at the London Marathon in April. He will face strong opposition from the likes of Kenenisa Bekele, an elite Ethiopian marathoner.

During Black History Month, the sporting world admires Kipchoge as one of the greatest athletes of all-time for being the first person to ever run a marathon in under two hours. As he always says, “No human is limited”.