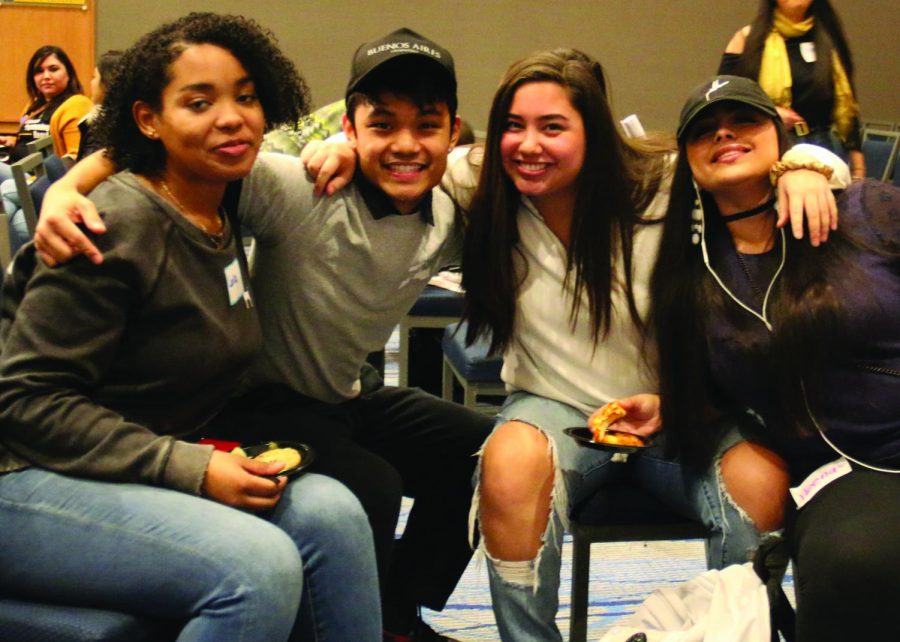 NPB event coordinator, Alvin Gutierrez, with a few of the friends he met this year as a freshman.

For students looking to meet new people and make new friends, NEIU’s Programing Board (NPB) had its first Mix and Mingle event on Jan. 23 in Alumni Hall. NPB hosted their speed dating event, allowing students to socialize outside of the classroom and use the skills acquired at the event to help them meet others on campus. All students were provided a sheet with conversation starters so that nobody would struggle with communication during icebreaking portions of the event. The gathering was coordinated by Alvin Gutierrez, who offered more information about the purpose of Mix and Mingle.

“It is a social event where people get to know each other, exchange information if they wanted to and it’s a nice way at this point in the semester to just get to know each other. It’s a new year, it’s a new us,” Gutierrez said. He also explained how the event was thought of by students, as are other events held by the NPB. “We distributed slips of paper and we asked students what they would like to see on campus. Based on the results, this was the most popular,” he added.

Gutierrez also explained how the event was originally suggested by students to mirror speed dating. “We didn’t want to title it speed dating because we didn’t want people to feel reluctant to show up and see it as a way to meet someone and date them, but rather see it as a way to just meet new people and exchange Snapchats, Instagrams or even phone numbers,” he said.

Although the idea was for the event to be more like speed dating, the majority of attendees gathered in a big group. “We just want to create an event where people can do more than just go to class and then just leave class,” said Gutierrez. “We just want people to get to know each other and to develop yourself in college. This is a way to enhance that experience.”

The participants were impressed with the event. NEIU senior Ankush Vyas, who works as the online editor at the NEIU Independent, thought it was a good way to get to know peers that he has seen around campus. “I think it was pretty successful in terms of meeting people. I already know about half of the people here, so it’s pretty exciting to learn some interesting stuff about them, like what’s their favorite color,” he mentioned.

Vyas added that sitting and talking with familiar faces made it easier to open up and begin conversations, “There are a few faces I’ve seen before, but we were just strangers, but this event gave us an opportunity to actually meet and exchange contact information and get connected.” He also added that those he met were friendly enough that he was able to share information about himself that he would normally feel hesitant to mention. He would definitely consider going to another event like this in the future.

Freshman Paula Merchan also found the event very enjoyable. “I’m meeting new people, making new friends and socializing. I felt welcomed from the start when I was entering by the people at the front,” she said. “I learned to be more confident and secure about myself. I would definitely consider coming to an event like this again, and even recommend it to my friends,” she concluded.

NPB can be followed on Facebook at Northeastern Programing Board, and on Snapchat and Instagram at neiupb.