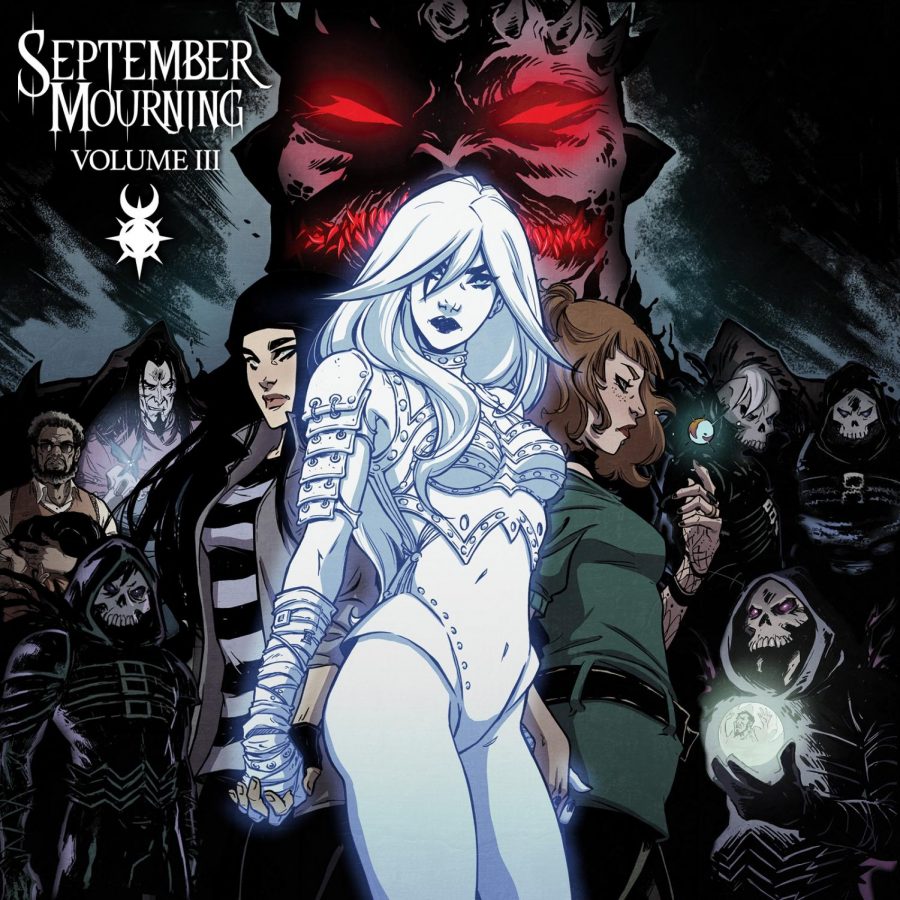 Transmedia project September Mourning uses their unique brand of heavy metal to fuse the inventiveness of comic books with the calamity of gothic metal. Fronted by vocalist Emily “September” Lazar, the Los Angeles-based rockers offer their audience the unique opportunity to conceptualize their vision through visual arts, resounding riffs and haunting lyrics, bringing the fantastical and supernatural to life.

Lazar, who represents the character “September” on stage, is flanked by what she refers to as “the Reapers,” depicted by lead guitarist Rich Juzwick (formerly of Gemini Syndrome), drummer Kyle Mayer (formerly of 10 Years) and Aaron Hoover. Collectively, they utilize their artistry and musical prowess to narrate a harrowing tale of human mortality and paranormal empathy.

On Dec. 13, September Mourning released Volume III, a four-track EP that explores the cannibalizing nature of rejected love and the perseverance that follows. For those unfamiliar with September Mourning’s brand of unrelenting rock, Lazar states that their catalogue appeals to a variety of listeners. For younger demographics who prefer digital streaming platforms, Lazar recommends sampling Volume III, which features hits such as “Unholy” and “Overdose.” On the other hand, older fans may enjoy some of their older work.

“I think [younger listeners] can listen to anything on Volume III,” said Lazar. “I think a lot of our songs have a lot of cross-market sharing of different musical genres. So in that aspect, I think anything from that [album] would be great. As far as those older rock listeners who may be stuck in the older genre of rock, they might enjoy ‘Eye of the Storm’ or ‘Children of Fate’ because those touch on the older rock influences.”

Lazar’s well-documented fascination with comics has been a foundation for her success, helping her mature into the multidimensional artist she is today. With the help of Marc Silvestri of Top Cow Productions, Lazar’s tenacity and unbridled passion allows her to construct a relationship between her various passions and interests, spawning the idea for September Mourning.

“We’ve been doing this for a couple years now,” said Lazar. “We’ve been using the animation and visual arts from the comic books. We animate it, I do voice-overs for it and we kind of tell the story on stage a bit before supplementing it with a musical component.”

According to Lazar, September sometimes adopts a tendency to play both judge and jury in her quest to empathize with mortal beings. Because of such a unique power dynamic, September finds herself fumbling through her determinations on whose soul to salvage and whose to dismiss as irredeemable.

“She’s basically kind of like me on steroids,” laughed Lazar. “She wants to do good but it seems like every time she tries to do good, something goes wrong. We’ve all had that feeling where we want to do well, we want to do something good in our lives and then we do it and there’s this aftereffect that’s not good.”

But unlike most characters of the underworld, the tale of September Mourning explores the happy mediums that exist within the gray areas of life, thus highlighting the human side of a partially inhuman character.

Throughout Volume III, Lazar traverses the entire emotional and musical spectrum, refusing to confine herself to one theme, genre or message. She challenges preconceived notions on what rock vocalists are supposed to represent, poaching influence from every genre ranging from hip-hop to black metal.

“I’m kind of all over the stratosphere with my influences, so I’m not really nailed down to one person or genre in music, and I think that’s what makes my writing unique,” said Lazar, referencing her appreciation for multiple genres. “I think the most creative writers take from a lot of different places.”

“[September] learns a lot about the emotional core of the living,” explained Lazar. “All of the songs can stem from different places of anyone’s emotional core. It’s not like I painted myself into a box of writing where I can only write about this. I kind of gave myself a free-for-all with emotional feelings. Every album is an emotional roller coaster and it all changes.”

With such stark imagery, the comparisons between September Mourning and acts like In This Moment are inevitable. From an auditory perspective, Lazar has been compared to former Flyleaf frontwoman Lacey Sturm and Halestorm’s Lzzy Hale. However, while Lazar appreciates the benefit of such commonalities, she also outlines the challenges of building a novel brand amidst such persistent comparisons.

Nevertheless, Lazar’s bold stage presence and vocal prowess has earned her a place amongst the upper echelon of female rock vocalists, a faction Lazar recognizes as a rapidly expanding group.

“[Female artists] are dominating urban, they’re dominating pop;” said Lazar. “you’re seeing the rise of the female musician right now. It’s really exciting. Any female coming up in rock should just keep on developing yourself and your sound and as long as it’s good, it’ll cut through.”

Lazar offered one final message for fans clamoring for more music from September Mourning. She states that the band is currently in the process of finishing up Volume IV and are preparing to commence a headlining tour that will make a stop at The Forge in Joliet, Ill., on Feb. 9. Aside from the haunting imagery, reverberating riffs and thunderous vocals that have become synonymous with the September Mourning brand, Lazar warns fans to be prepared for some “really good s***” from their upcoming tour.