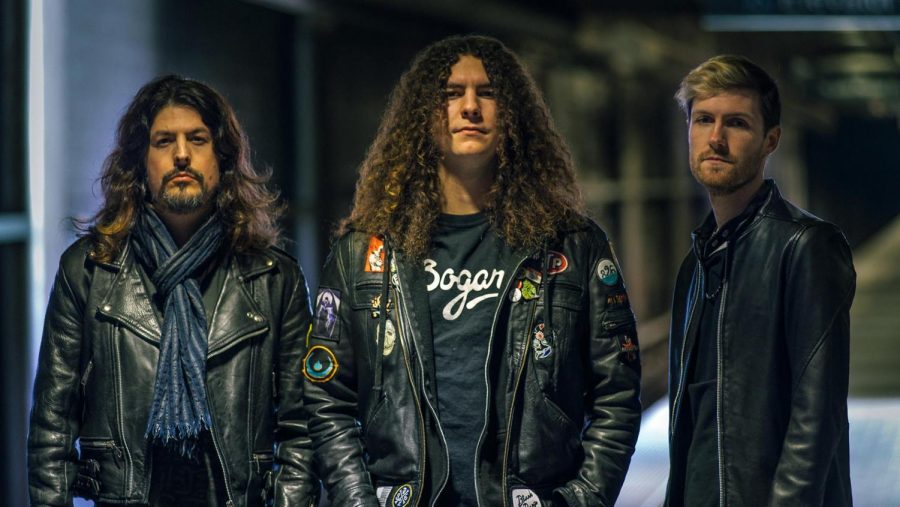 Like Machines use their bold, imposing brand of hard rock to investigate society’s most persistent issues. Comprised of vocalist Andrew Evans, bassist Tanner Hendon and drummer Cheney Brannon, the Atlanta hard rockers revisit the past, offering listeners a modern interpretation of the rock that afforded the genre a seemingly indefinite stay atop the charts.

Throughout the past decade, mainstream radio has gravitated away from rock and its subgenres, expanding its parameters for the sake of recruiting fans of neighboring genres. As a whole, music seems to lack a clear, succinct purpose, devolving into an assortment of catchy phrases, artificial beats and quick attention grabs.

Rather than subscribe  to today’s music trends, Like Machines uses their socially conscious lyricism and resounding riffs to both spread awareness and ensnare listeners.

Since forming in 2015, Like Machines has always enjoyed stirring the pot. Previously known as The Stir,  the band decided to change their name last April to avoid confusion with another band performing under the same title. While some challenges arose when transferring their fan base from one name to the next, Like Machines states that it was mostly a seamless transition.

“In some ways it was starting over, but in most ways it was a continuation,” said Evans. “Even though we changed the name, a lot of people who were digging us, followed.”

Like Machines gathered momentum in 2019 after releasing “Kaiser,” a tormenting, nonpartisan exploration of the impacts of war. Their next two singles, “Destitute” and “Run, Hide,” scrutinized society’s apathy toward the homeless epidemic and the debilitating effects of drug addiction, respectively.

While utilizing lyricism to promote social awareness isn’t a novel concept, social commentary has largely been absent in rock over the past decade. Penetrating macro issues was a staple of the genre’s golden age, though the practice has since mostly been abandoned in favor of producing sanitized, . Like Machines’ willingness to push the envelope and inspire introspection is refreshing in today’s socioeconomic climate. It’s bold. More importantly, it’s reflective of the real life issues encountered by the band during their travels.

According to Evans, the inspiration behind releases like “Kaiser” and “Destitute” developed organically

as the band toured the country alongside artists like Fozzy and Collective Soul. Witnessing firsthand the crippling effects of homelessness in major U.S. cities was a harrowing experience that furthered the band’s appreciation of the issues at hand.

“It kind of depends on what is hypersensitive at the time,” explained Hendon. “With ‘Destitute,’ Andrew traveled a lot during the time period that we wrote that. [We] visited San Francisco and saw the homelessness. We took his own perspective and used it as a big picture outlook kind of thing.”

Moving into 2020, Like Machines hopes to tackle an array of other social issues–consumerism, capitalism and the application of religion spring to mind–though Brannon contends that the band won’t force the issue for the sake of manufacturing an identity.

“I wouldn’t say the topics are that conscious,” said Brannon. “We’re not necessarily searching for the next topic to write about. It’s just kind of the experiences that happen to you while you’re going through life.”

When watching Like Machines, it’s evident that the trio are superstars in the making. On stage, the similarities between Like Machines and their creative influences are apparent. Evans, whose curly brown mane bounces with reckless abandon every time he ventures out from behind his microphone, flawlessly shifts from jarring vocals to scorching solos, appearing on the surface to be a hybrid between Guns N’ Roses’ Slash and Axl Rose. Hendon expertly dictates the pace as he roams the stage, puppeteering an already excitable crowd into a frenzy. Brannon governs the beat with an educated hand, hammering his drums with such . It’s a special, community-driven concert experience.

Despite more listeners discovering Like Machines’ distinct brand of rock n’ roll, the band still makes a concerted effort to acknowledge the importance of their fanbase. They engage via social media, respond to compliments and man their own merchandise table after shows. The significance of strong live performances and fan engagement isn’t lost on the members of Like Machines.

“It’s especially important when you’re an up-and-coming band,” said Hendon. “If you don’t have fans, you don’t have a band. You need to treat them as well as they treat you. I think that the relationship between a band and fans can also be inspiring. It can put good pressure on the band. These past two shows [in Milwaukee and Joliet], we’ve had people who have driven over three hours to come see . We have to go out and put on a good show.”

Evans added, “They’re going to be the ones to connect with us. When you’re writing, you feel and when somebody else feels it, it’s like ‘oh sh*t.’”

As Like Machines prepares for their upcoming tour in support of Crobot and Aeges, they aim to solidify their place in a fluid rock n’ roll genre. The emergence of acts like Like Machines has helped initiate a much-needed revival of a rock genre that has been declared dead by some of its most notable names, such as Gene Simmons of KISS and Scott Ian of Anthrax. Like Machines highlights the importance of new acts adopting the elements that underscored rock’s success while also adding their own unique spin.

“I feel there’s a bit of a transition going on,” said Brannon. “I feel like the bands that have been popular since 2006 in rock have been dominating the platform. There hasn’t been a whole lot of new stuff really going on the past decade, I’d say. But I feel like there’s a lot of new younger bands that are up and coming. I mean bands like Greta Van Fleet, Dirty Honey and Crobot.”

Brannon continues, “It just feels like there’s a surge of younger bands. I think that we bring some

authenticity to the rock scene. We’re just three dudes on the stage, rocking. There’s not any tricks; we’re up there playing our instruments and doing it for real. And it’s raw, it’s heavy, it’s fast. I feel like that’s what’s been lacking in the rock scene for a while. We’re trying to give them a raw, non-looped experience. I hope people dig that.”

And as Like Machines sits at the forefront of the resurgence of rock n’ roll, they intend to build on their momentum in 2020. In the upcoming months, the band plans on composing and releasing new singles on a staggered schedule. As for their plans to begin the new decade?

“The shows are gonna kick a**; more growth, more evolution and curb stomping. We’re taking it over, man.”