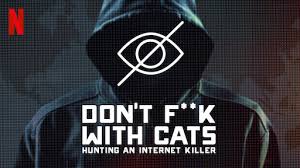 The docuseries begins with Deanna Thompson, a data analyst at a Las Vegas casino who operated under the pseudonym “Baudi Moovin,” and John Green, two internet vigilantes who dedicated 18 months of their lives to tracking down Magnotta’s whereabouts. According to Thompson, Magnotta violated “Rule Zero” when he recorded and disseminated footage of himself suffocating two kittens by way of vacuum seal, prompting Thompson to join a Facebook group dedicated to relentless pursuit of the then-unknown identity of the perpetrator.

Director Mark Lewis expertly highlights Magnotta’s narcissistic tendencies, revealing the manner in which Magnotta inundated the internet with images of himself in pursuit of superficial validation. Unable to earn praise from his modeling and acting endeavors, Magnotta resorted to shock value, torturing and murdering the most vulnerable of animals in order to recruit a following.

Narcissism, a personality disorder that forces the impacted individual to seek appreciation through the promotion of an idealized image, often runs parallel with a desire to control the perceptions of others. Magnotta, unable to impress the internet despite his best efforts, resorted to manufacturing a meticulously-crafted persona, creating a litany of Facebook groups dedicated to his own image. He would comment on his own pages, offering himself flattering compliments directed at his physical appearance.

However, when his artificial popularity failed to resonate with social media, Magnotta turned to more sinister means. Seduced by the newfound notoriety inspired by unabashed hate, Magnotta recorded himself murdering two more kittens, one through drowning and the other by way of python.

The videos make for haunting views, needless killing for the sake of satiating an inflated ego. Following the release of the second and third videos, the Facebook group, led by Thompson, experienced a renewed vigor, hellbent on bringing Magnotta to justice. However, Magnotta’s lust for fame advanced his thirst for violence, inspiring him to initiate a cat and mouse chase erected on a foundation of disconcerting patterns of violence.

Enticed by the attention, Magnotta would leave a trail of clues for his followers to dissect. He’d create a fake profile with only one like, which redirected those perceptive enough to uncover it to the trailer for Leonardo DiCaprio and Tom Hanks’ 2002 thriller “Catch Me If You Can.” Magnotta would provide blurred images of his face, forcing the Facebook group to acknowledge that he’d been following their informal investigation. What began as a desperately misguided attempt to for attention collapsed into a thirst to earn notoriety through indiscriminate murder, a game Magnotta greedily accepted.

Magnotta’s murderous trajectory forces one to ponder over whether or not providing him such attention served as a self-fulfilling prophecy. While the group’s relentless dissection of each still frame of Magnotta’s videos temporarily satisfied Magnotta’s yearning for attention, the recruitment of the 2009 television series Rescue Ink Unleashed and the subsequent article by The Sun’s Ryan Sabey titled, “Catch the sicko who fed a kitten to a python” reinforced Magnotta’s underlying motives. But such attention is fleeting, handicapped by the law of diminishing return. Magnotta seemed to understand if he wished to keep the spotlight firmly placed upon his slender shoulders, he would need to up the ante.

In 2012, a reporter from The Sun accosted Magnotta, demanding answers surrounding the then-viral videos of him sacrificing kittens. Predictably, Magnotta assumed a victim’s complex, emphatically denying the allegations while claiming such attention had irreparably damaged his life and reputation. However, under the guise of anonymity, Magnotta later sent The Sun a letter claiming that his next victim “won’t be small animals.”

His plan came to fruition on May 24, 2012, when Magnotta arranged a Craigslist meeting with Jun Lin, a Chinese international student at Concordia University in Montreal, Quebec, Canada. The very next day, Magnotta distributed a video titled “1 Lunatic, 1 Icepick.” At this point, I must warn you, the details of this video are haunting and graphic in nature.

Magnotta tied Lin up to his bedposts, incapacitating his victim with a concoction of drugs. From there, Magnotta reenacts the scene from “Basic Instict”–which his mother later reveals to be his favorite movie–where the protagonist (antagonist?) mercilessly pierces her lover with an ice pick before dismembering Lin and mailing the severed limbs to both the Conservative and Liberal Parties of Canada.

Overall, Magnotta stabbed Lin approximately 100 times. By the end of the video, Magnotta is seen toying with Lin’s severed head and liberally slicing at his lifeless torso.

After a chase that spanned approximately two years and several different continents, Magnotta was captured on June 4, 2012, in Berlin, Germany, at an internet cafe while researching himself on the Interpol website. Magnotta, now depicted as a timid, fragile man, defends himself by once again assuming a victim’s complex, claiming that a client by the name of Emmanuel “Manny” Lopez–Magnotta became an escort after failing to penetrate the movie business–coerced him into committing such heinous, gory acts, acting as a sort of puppeteer.

The Montreal Police, after spurning the Facebook group’s countless attempts to collaborate with them, began to accept the evidence collected by the internet vigilantes, who use Magnotta’s sparsely littered clues to construct a theory that Magnotta was reenacting the plot of “Basic Instinct.”

In December of 2014, Magnotta was convicted of first-degree murder, criminal harassment, mailing obscene and indecent material, committing an indignity to a body and publishing obscene material. He was sentenced to life in prison with the possibility of parole after 25 years.

Lewis did a masterful job of chronologically weaving together competing timelines in a case that is truly stranger than fiction. Beginning with Thompson and Green’s amateur pursuit of a burgeoning serial killer, the intricate details uncovered by a group of self-described internet nerds masquerading as detectives was an astounding exhibition of perception and attention to detail.

Furthermore, Lewis’ portrayal of Magnotta’s maturation from a desperate, insecure man who failed at each his professional endeavors to a murderous narcissist and overall creep made for surreal viewing. At times, the narrative felt fake, the twists too convenient and well-rounded to be true. As a viewer unfamiliar with the international panic that Magnotta incited at the onset of the decade, I simply couldn’t bring myself to accept that Lewis’ docuseries accurately represented the integrity of the Magnotta case.

However, after some thorough research, I was forced to concede that this man, a man who looked so unassuming and pathetic that you almost pitied his existence, actually satisfied his insatiable desire for attention by maiming, murdering and dismembering those he deemed most vulnerable.

The docuseries also shines a spotlight on the danger of unregulated narcissism, almost taunting the general narcissist for the lengths he or she will go to remain relevant. While this series is a straight-forward recollection of a tragic case, it was almost comical (in the most warped sense of the word) to watch the communicative transactions between Magnotta and the individuals Lewis interviewed.

By default, everyone from the internet vigilantes whose informal investigation provided Magnotta the motivation to intensify his acts of violence to the willfully ignorant mother who refuses to accept that her son acted as an individual operated as an unsubscribing enabler to Magnotta’s lust.

What’s nearly as striking as the actual murders themselves is Magnotta’s preemptive defense, constructed a year-and-a-half prior to the actual murder of Lin. To manufacture a character based loosely on the Manny Vasquez character featured in Basic Instincts is a display of sinister brilliance. Magnotta enlisted the services of an attorney, sending him a detailed list of the feigned abuses he claimed to endure. He purposely misled his own mother 18 months before murdering Lin for the sake of planting a seed of doubt, selfishly trapping her in an indefinite, vicious cycle of denial.

But one would be forgiven for asking why a killer so determined to retroactively absolve himself of fault would leave breadcrumbs for both his vigilante following and law enforcement to trace. Perhaps Magnotta’s initial vision was compromised once Magnotta first tasted notoriety, unable to forfeit that which he so shamelessly longed for throughout his entire adult life. Perhaps Magnotta believed himself to be immune from consequence, insulated from real-life ramification by the delusions of grandeur that manifested themselves in his mind.

But as Green stated at the end of episode three, the man who dared everyone to catch him inevitably got caught.