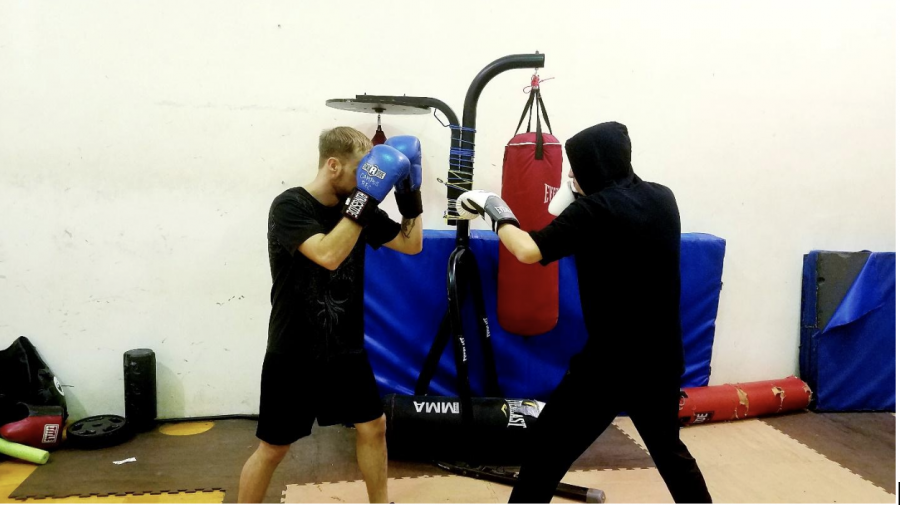 Noffz, a physics major at NEIU, harbors a passion for athletics and boxing, inspiring him to start up a boxing club that invites students of all skill levels to get active and sample combat sports. According to Noffz, he was looking to join an on-campus athletic club and learned that NEIU previously had a boxing club.

“There was a boxing club here for the longest time but what usually ends up happening with boxing clubs is people start it up then they graduate, and it’s left in flux,” said Noffz. “Then someone else has to step up. I wanted to actually join the existing one. When I was on the NEIU website for intramural sports, it said there was a boxing club but when I checked it out there were no members. That’s when I took the initiative to create one.”

Once Noffz was given the green light to reinstate the boxing club, he embraced the opportunity to bring boxing back to NEIU.

Noffz, who serves as president of the boxing club, has boxed at a variety of gyms, allowing him to learn different training styles. He takes the aspects of training that he believes to be the most effective and applies it to exercises at the club. Vice president Michael Castellanos also brings years of boxing experience to the club, having previously taught park district boxing.

The boxing club welcomes students of all skill levels and invites students who are new to boxing to come and learn the fundamentals of throwing punches, blocking and footwork. Noffz describes himself as a patient teacher, understanding that everyone learns at a different pace. He adopted the approach of determining a student’s skill set before modifying each workout to both create a comfortable learning environment and optimize the student’s growth as a boxer.

“A lot of people come in and they’re kind of hesitant to join because they don’t know anything about boxing or haven’t done boxing before,” said Noffz. “When they join, almost everyone really likes it.”

Boxing is a great outlet to release the stress that students incur from everyday responsibilities, including both work and school-induced stress. Not only do students receive an opportunity to be part of a club, they also get in an invigorating workout. Staying healthy and fit can instill confidence and help students better cope with stress.A typical boxing club meeting begins with stretching warm-ups before transitioning by fundamentals training. The fundamentals include different types of punching styles, such as jabbing, hooks and uppercuts. Students participate in partnered drills using pads, punching mitts and gloves. Sometimes the club participates in mock sparring exercises where partners will throw half-speed combinations of punches at each other. Sparring sessions are meant to simulate what someone might expect in a boxing fight.

Noffz speaks highly of the boxing club and its members stating, “I think it’s just a great group of people honestly. Everyone is really cool. We all get along and it’s a great workout.”

Boxing club meetings are held at the PE complex in racquetball court four. This semester, the boxing club meets Mondays at 4:00 p.m. and Thursdays at 2:00 p.m. Next semester, Noffz anticipates meetings will be on Tuesday and Thursday, but he has not hashed out the exact time frames yet. He plans to collaborate with existing members to figure out time slots that work well with most students’ schedules. Gloves and equipment are provided but students have the option to bring their own.