The Hobbit Ain’t Half Bad 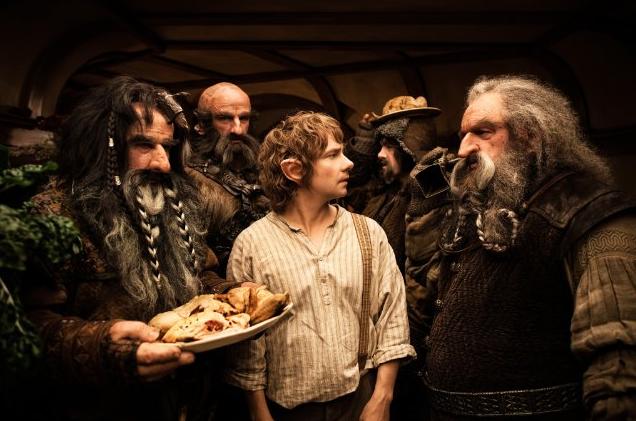 A new trilogy has begun. The Hobbit: An Unexpected Journey is the first of three installments directed by the same man who brought The Lord of the Rings trilogy to the big screen, Peter Jackson. His adaptation of J.R.R. Tolkien’s The Hobbit serves as the first installment of the prelude to the blockbuster LOTR trilogy.

Part one of the children’s book has all of the weapon-wielding, magic-gathering, and troll-slashing that the first trilogy offered, and more. Jackson’s newest trilogy has dragons and more wizards- one more wizard to be precise. It stars a younger Bilbo Baggins (about 40 years of age) accompanying a baker’s dozen of dwarves assisted by Gandalf the Grey, who serves as an adviser on their mission to slay a dragon and reclaim their lost home, the Lonely Mountain.

Bilbo, played by Martin Freeman, is a nervous wreck when dwarf after dwarf arrive at his humble hobbit hole. Upon learning about a castle, treasure, a dragon, and a dangerous adventure, Bilbo initially refuses Gandalf’s invitation to join the company as their thief. But the morning after a night of binge eating and drinking (most of which was taken part in by the dwarves,) Bilbo has a change of heart, racing out of his hole to join the bearded travelers.

The company encounters trolls, elves, goblins, and eagles as they journey toward their final destination, the Lonely Mountain- a solitary peak wherein lies a treasure hoard guarded by a dragon named Smaug, the last of its kind in Middle Earth.

But if 13 dwarves, a nervous hobbit, and a wizard aren’t enough to keep this journey moving, the introduction of the Brown wizard gives fans of the trilogy a new character to follow. Radagast the Brown, a lover and communicator of animals, is a fool according to the wizard Saruman. The Brown wizard has a love for plants and animals that compels him to live among them, establishing a permanent abode inside of a forest in Middle Earth. When animals in his forest get sick, and plants seem to deteriorate, the wizard’s curiosity leads him to discover a great evil. He quickly races from his forest home to inform Gandalf. Radagast, who sports a bird’s nest under his wizard cap, also has Rhosgovel rabbits that can outrun the giant wolf-like wargs the orcs ride upon. His quirky personality steals the show, if only for a moment.

A side story involving the wizards and elves is related to the evil uncovered by Radagast. The other side story is Bilbo’s discovery of the ring that eventually becomes Frodo’s burden 60 years later.

Tolkien’s book is full of adventure, which is why Jackson saw fit to turn it into three installments, even though it was initially scheduled for two. Each chapter is a new adventure fighting off goblins, trolls, etc. The decision to split the movie into three parts pays more homage to Tolkien’s work, particularly by adding aspects from Tolkein’s Silmarillion. Not so simply, Jackson did a wonderful job with this first segment.

The movie, shot at 48 frames per second (fps), is double the standard 24 fps. This is the first time any movie has done this and the epic backgrounds and detailed sceneries are as entertaining as the adventure. The only issue with this part 1 of 3 is the abrupt ending. Just when things are about to get even more exciting, the credits roll. Fans of Middle Earth and curious cinema-goers will have to wait until next December to continue the journey. All signs indicate it will be well worth the wait.