President’s State of the University Address 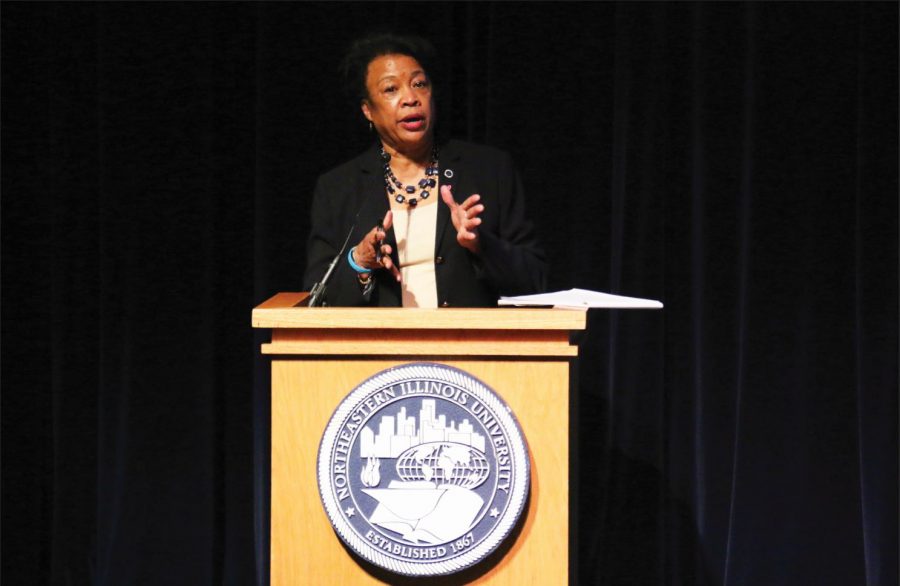 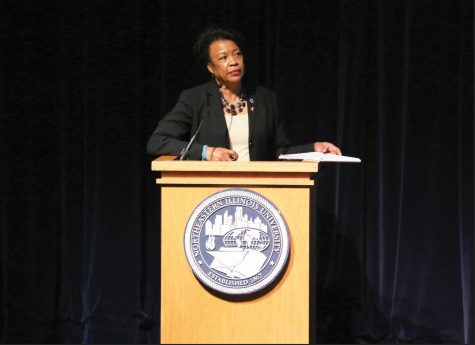 NEIU President Gloria Gibson became visibly upset during her second State of the University Address when she was interrupted by members of the audience yelling, “Step plan!” The address was attended by many faculty, staff and students on Tuesday, Oct. 22 in NEIU’s main auditorium. Gibson was accompanied on stage by her cabinet, including Provost Dennis Rome.

Gibson began her time at the lectern by saying how appreciative she was to be able to address the university community. However, she was quickly interrupted by audience members sitting in the front row.  In response to the yelling, Gibson asked “Is that what this is going to be?” She then made her way back to her seat.

Vicki Byard, Chair of the staff senate at NEIU, asked the audience to limit their disruption and give the president the time and respect to present her address.

Gibson took a few moments to collect herself in front of the silent audience before greeting the crowd again.

Gibson acknowledged awards, grants and honors received by staff as well as many achievements the university had garnered as a whole in the past year. These included high rankings for low student debt, social mobility and security. Gibson also highlighted that “The Chronicle of Higher Education ranked Northeastern second in the nation among the four-year public institutions for diversity among managers.” Meaning NEIU ranks second in the nation for having the most diverse managerial staff.

Access, opportunity and student success remain Gibson’s primary goals as president, as well as inclusion and equity. However, the most important question NEIU faces is how does it reach potential students of all backgrounds, Gibson said.

NEIU hopes to have a five percent increase in first-time, full-time freshmen recruitment in the year 2020.

Gibson highlighted her enrollment initiatives to reach this goal. These include increased usage of technology, increased outreach to diverse communities and an aggressive recruitment calendar to notify students of acceptance and financial aid packages.

Another big part of the address focused on Transition Committee Initiatives. These included creating a Student Success Center which will act as a student and family oriented one-stop-shop for incoming freshmen and transfer students. Also included were strengthening connections between Career Development and Alumni Relations to foster career pathways, developing eight week classes, creating a self-designed interdisciplinary major and many more.

Before thanking the university, Gibson also said one of her dream goals would be to investigate re-establishment of Division 3 or National Association of Intercollegiate Athletics (NAIA) athletics for women and men.

For more detailed information on what was talked about in the address go to, https://www.neiu.edu/about/university-leadership/president/state-of-university-addresses. The slides presented during the address are located here. 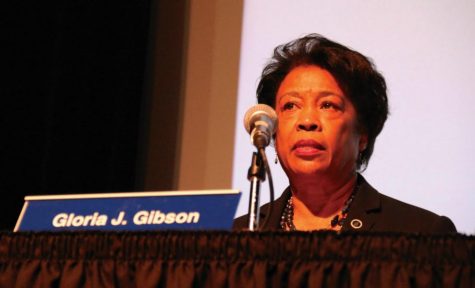 Gibson’s presentation was followed by a question and answer section. Students and faculty used microphones to address the president.

A graduate student who works on campus told the president that while she felt that NEIU has transformed her life for the better, she explained that her interactions with students have revealed some things that are concerning to her. “I feel like I get a lot of feedback from students I’ve worked with about bias from instructors and other university resources,” she explained to the audience.

She continued with two requests for the president. The first was that all student resource staff be informed of the language variations used by NEIU’s diverse student body. She explained that this would facilitate communication and reduce the perceived bias against a student’s personal dialect. She also requested that the administration make an effort to seek insight from student resources staff on student concerns and frustrations as they are the people who are working closest to students.

Gibson responded to this by saying, “I would ask you to please encourage students to participate in our climate study because that will give us the temperature, if you will, on our campus and what kinds of things students are going through.” She added, “No student should feel less than on our campus.”

The climate study refers to a campus climate assessment that the university is currently conducting with an outside consultant, Rankin & Associates Consulting. The hope is that the results of the study will help to facilitate a healthy and inclusive learning environment. The data is collected through surveys taken by students after visiting student resource centers throughout the main campus, El Centro and the Carruthers Center.

Following this, Isaura Pulido, associate professor and department chair for the College of Education commended the president on her leadership and support for the institution as a Hispanic Serving Institution (HSI) and for almost reaching the threshold for being considered a Minority Serving Institution. Pulido also gave the president and her cabinet the following advice, “Remember who we are, but also note that we are looking at who today’s college students are.”

Pulido gave informative statistics on the makeup of college students today, highlighting the prevalence of minorities, adult learners, first-generation college students and students caring for children. She said, “So as we think about the kinds of initiatives that we undertake, I would really want us to work together and be mindful of who we’re serving.”

Gibson responded by acknowledging that half of our students are part-time and they average in age from 27 to 28. “We are a little unique in that way and that’s great. But our job is to provide an education for all students who come to our university,” she said. Gibson also stressed that reestablishing athletics is a dream goal and that sports can be for everyone.

Gibson said after the event, “I thought this State of the University Address went very well. There was great attendance by students, which shows that the campus really cares about the institution. And I’m very hopeful as we move forward with a number of the initiatives that were discussed.”