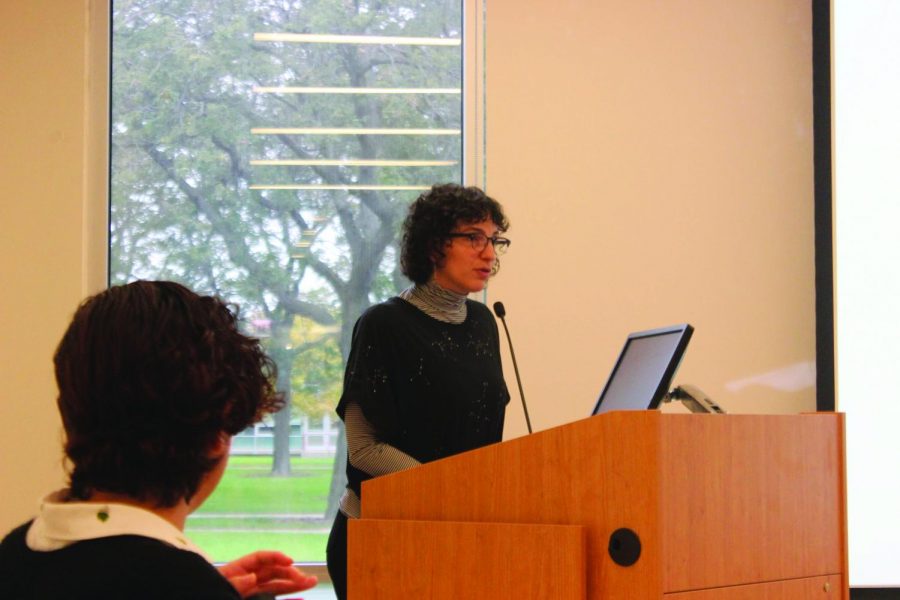 Gerber Bicecci sharing from her work with a captive audience. | Photo by: Grace Yu

As part of the Lit & Luz Festival organized by MAKE Literary Productions, the NEIU campus was recently graced with a visit from Argentine-Mexican artist and author Verónica Gerber Bicecci. While in the Pedroso Center on Oct. 15, students were treated to Gerber Bicecci reading from her 2015 book, “Empty Set,” in both English and Spanish. After her reading, Gerber Bicecci participated in a lively conversation with NEIU English major and student writer Natalie Valentin-Espiet.

Gerber Bicecci admits to a fascination with doubles, a motif that recurs throughout “Empty Set.” The book is a fragmented story cleverly narrated through both words and illustrations about a woman, also named Verónica, who reflects on losses from her childhood while undergoing the pain of splitting from a partner. While resembling her author in some respects, Verónica is not an exact copy of her author but represents a reflection, or her twin.

Furthermore, “twin” versions of the story were produced in English as well as the original Spanish with the collaboration of translator Christina MacSweeney. The toughest translation decision for Gerber Bicecci between the Spanish and English versions was how to symbolize her protagonist, who speaks in the first person, as a single letter; in the book, characters are referred to by their initials, read like they are written into lines of a legal document. They become abstract signs symbolizing their role in the protagonist’s life and narrative. Gerber Bicecci eventually settled on “I” for Verónica (Y[o] in the original Spanish version). On the other hand, Mother (M), Brother (B) / Hermano (H), Grandma (G) / Abuela (A), her new man Alonso (A), the former romantic partner Tordo (T) and Her (H), Tordo’s new partner, all have a role to play in Verónica’s life. The effect isn’t depersonalizing. Rather, these characters’ actions intersecting with the life of “I” / “Y” and the ramifications of these actions are somehow felt with greater magnitude.

Illustrations from the book demonstrate Gerber Bicecci’s fascination with diagrams. In addition, for the Lit & Luz Festival’s Live Magazine Show at the Museum of Contemporary Art, Gerber Bicecci’s collaboration with Cubano choreographer Michel Rodriguez Cintra produced a dance piece inspired by diagrams she had drawn.

Venn diagrams in “Empty Set,” for another example, create a simple, deft visual representation of “I’s” relationship and subsequent break-up with her former partner, T. Gerber Bicecci uses two overlapping Venn diagrams (three circles total) to form T’s relationship with I, as well as T’s relationship with the other woman, H, but the shaded area where I and T intersected becomes an “empty set.” A void is created where the two once existed as one. A further diagram shows a once whole circular I with the section that remained with T sliced off from the whole.

“Events always had a dark side, a shaded area we couldn’t make out, one that, despite being empty, always meant something more,” reflects Verónica. “Empty Set” is a wonderful, shrewd tale, a fine literary treat that was listened to and engaged with by the NEIU community.