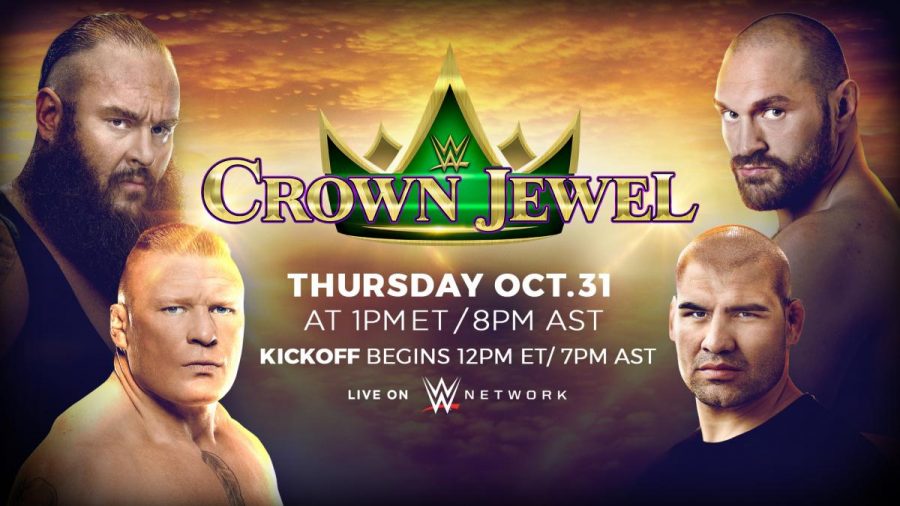 The top two titles are up for grabs. Who will prevail? | Photo by: WWE.com

WWE will return to the Kingdom of Saudi Arabia Oct. 31 for their now-annual Crown Jewel pay-per-view event. The event will take place at noon Central Standard Time (CST) at King Fahd International Stadium in the city of Riyadh.

This is a hard match to predict. On one hand, Brock Lesnar is a proven commodity in the WWE, proving his value in the form of buyrate success over and over again. However, it’s difficult to envision WWE bringing in former UFC Heavyweight Champion Cain Velasquez only to have him lose his first contest under the WWE banner. If I were a betting man, I’d anticipate a disqualification finish in order to elongate Lesnar’s title run while concurrently protecting both superstars. However, if this match is afforded a clean finish with a definitive result, I’m choosing Velasquez to walk out as WWE Champion.

Braun Strowman’s metamorphosis into the modern day version of the Big Show will be complete once he inevitably loses to boxing heavyweight Tyson Fury. Considering both Fury’s need to protect his real-life reputation as one of the toughest men in the world and the fact that WWE is paying $15 million for Fury’s appearance, it is infeasible to believe that WWE would book anything other than a strong victory in favor of Fury. Furthermore, WWE has an extended history of neutering their in-house talent for the sake of catering to the egos of celebrity guests. Look for that trend to continue here.

Another tough one to call. On one hand, WWE needs to rectify the mistake it made at Hell in a Cell, where it booked Rollins to incapacitate Wyatt so thoroughly that the match had to be called without a definitive winner. The WWE Universe responded with audible vitriol, lambasting the decision to sabotage Wyatt’s momentum for the sake of extended Rollins’s stale Universal Title run.

On the other hand, in a self-inflicted wound, WWE Creative has indeed stunted Wyatt’s momentum, perhaps enough to opt against anointing him the next Universal Champion. Furthermore, a Wyatt victory would necessitate a brand switch which, considering the freshness of the brand extension, might be an idea WWE Creative balks at. My guess is that WWE exhibits its trademark stubbornness and stays the course with Rollins as champion.

Crown Jewel usually doesn’t feature any big surprises, so a safe bet here would be the new Raw Tag Team Champions, the Viking Raiders. However, I can’t shake the feeling that the Smackdown Tag Team Champions, the Revival, will find a way to steal a victory, laying the groundwork for an inter-brand clash at Survivor Series next month.

However, WWE might opt to forego oversaturating their title holders with accolades. This would be the ideal opportunity to boost the collective credibility of the tag team division by having a potential title contender prove their merit by winning the Best in the World match. However, that might also be giving WWE Creative too much credit.

Prediction: The Revival defeats the field.

On paper, this matchup seems like a gross mismatch. WWE basically booked it’s best impression of the Mon-Stars vs. Michael Jordan (in this case, Roman Reigns) and the Looney Tunes. It also feels eerily reminiscent of last year’s Team Raw vs. Team Smackdown offering at Survivor Series, which was won handily by Team Raw.

However, considering the current state of WWE storylines, this feels like a catalyst to propel Rusev, who is currently engaged in a love triangle feud with Bobby Lashley and Lana, into the main event scene. Look for Rusev to receive a Dolph Ziggler-esque (circa Survivor Series 2014) moment in the spotlight.

Though WWE has yet to announce the participants, it has been revealed that the winner will face AJ Styles for the United States Championship, which will also take place at Crown Jewel. Taking a blind guess, I’ll predict that WWE uses the battle royal as an engine to spotlight Buddy Murphy, who will go on to put forth a valiant effort against Styles before coming up just short.

NXT superstar Mansoor will get his second taste of main roster experience when he goes to battle against “The Swiss Superman”, Cesaro. While the matchup is a transparent effort for WWE to get a superstar of Saudi Arabian descent on the card, it’s a nice feather in the cap for Mansoor. Considering a Mansoor defeat might actually lead to a revolt, it’s hard to envision Mansoor losing to a directionless Cesaro. Expect Cesaro to manhandle Mansoor for the majority of the contest before Mansoor embarks on a prototypical babyface comeback for the victory

WWE announced Wednesday a historic last-minute addition to the Crown Jewel card. For the first time in the history of the KSA, two women will compete in a WWE match. Considering Natalya is a tenured veteran while Lacey Evans operates under a pro-American gimmick, expect Natalya go over here in order to minimize the potential of backlash from the live crowd. WWE’s priority here should be promoting the capabilities of their female roster while concurrently protecting the actual performers. Booking a Natalya victory would accomplish just goal while rewarding a loyal company woman with a nice moment to pad her Hall of Fame resume.