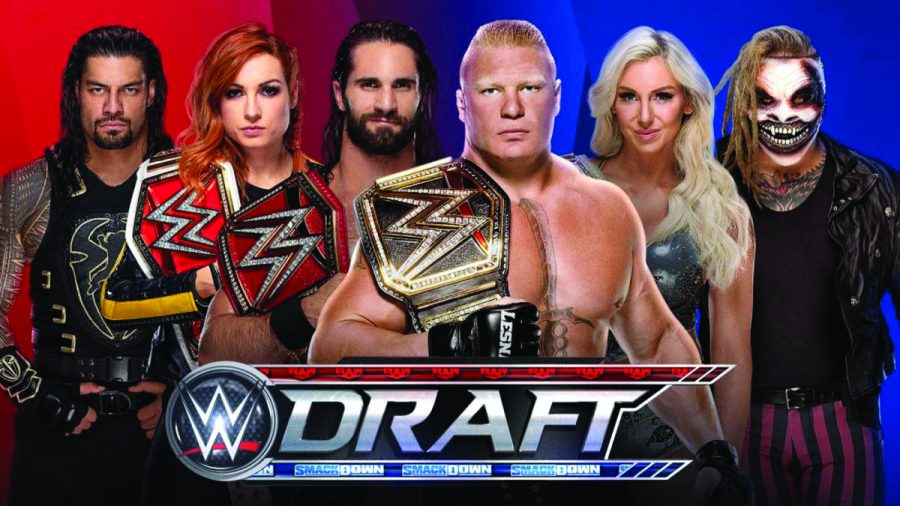 WWE splits their roster after Smackdown’s move to FOX | Photo by: CBSSports.com

WWE scheduled an intrabrand event spanning three nights to segregate their rosters into two distinct products. The event was marketed as a defining moment for WWE, spearheaded by FOX and USA executives, two networks vying for supremacy in the world of sports entertainment. Let’s dissect the ups and downs from the three night extravaganza.

After the first few picks of the WWE draft, the order of draft picks began to seem randomized.  Right now, the Lucha House Party holds zero value on the main roster. At best, they are talented enough to offer a few highlights while at worst, they are no more than enhancement talent. The idea of the Lucha House Party being picked ahead of proven talent like Cesaro and Luke Harper is laughable. The trend continued on Raw as superstars like Cedric Alexander were picked over superstars like The Miz.

Additionally, Raw drafting the former Women’s Tag Team champions to the same brand but separately suggests that those in the draft room either don’t watch the product or think so lowly of the remaining talent that they would burn a pick rather than invest it on a talent like EC3.

The fact that the current Intercontinental Champion, former WWE NXT champion and former Royal Rumble winner Shinsuke Nakamura got selected after guys like Alexander and Andrade is counterintuitive at best. Ignoring the fact that drafting Nakamura affords a brand the Intercontinental Championship, WWE really hammered home the notion that wins, losses and accolades do not matter during the draft. Is Andrade a future WWE Champion? Probably. Has he done anything of note while on the main roster? No, he hasn’t. In fact, he’s failed to win the same titles Nakamura has secured.

WWE segregating the superstars into separate draft pools compromised the entertainment value. I’d rather see who goes no. 1 overall rather than who goes no. 1 relative to their pre-determined draft pool. The gimmick watered down the impact of draft position via relativity and did neither the fans nor superstars any favors. It also insinuated that RAW is the superior brand, as seven champions will be selected on RAW, against two on Smackdown.

Heading into Hell in a Cell, Bray Wyatt was the hottest act in WWE. Reminding fans of the embryonic stages of the Undertaker gimmick, “The Fiend” captivated fans with his dual-personality persona, staggering between lucidity and derangement. A WWE Universal Championship reign seemed to be in his immediate future. Then Hell in a Cell happened.

Fans lambasted the finish of Wyatt’s clash with Rollins as it neutered both his character and momentum. However, it was assumed WWE would identify the fans’ vitriol and immediately make amends. Unfortunately, Wyatt is now on a roster where Brock Lesnar will compete against Velasquez for the WWE Championship, leaving Wyatt directionless should he fail in his quest to dethrone Rollins at Crown Jewel. While it’s feasible that Wyatt can temporarily usurp Strowman and Roman Reigns in the pecking order, I don’t see WWE presenting him on the same plane as Velasquez or Lesnar, essentially dooming his run to a series of grudge matches and backstage segments. That is unless WWE puts Raw’s top title on a Smackdown superstar at Crown Jewel.

Forcing brands to draft their respective champions is both redundant and illogical. WWE should have, by default, kept champions on the brand to which their championship is assigned. Smackdown shouldn’t need to draft the Smackdown Women’s Champion. Raw shouldn’t need to draft the Raw Tag Team Champions. If WWE really wanted a title to change brands, they could have woven it into a storyline through trade. I do wonder what would have happened if one brand had drafted both women’s or tag team champions, though.

The logic behind affording Raw three picks for every two picks from Smackdown is understandable, as Raw is responsible for three hours of content while Smackdown only has two hours to fill. However, this policy should have been implemented later rather than in the foremost rounds of the draft.  Smackdown was severely disadvantaged as Raw had four of the top six picks. Not only would Raw get an extra pick at the end of each round, but they’d also have the first pick of the following round, meaning they were picking back-to-back. WWE could have balanced out the rosters while also creating a sense of parity by shortening the later rounds, affording Smackdown the top pick and allowing Raw the two subsequent selections. Instead, they presented Smackdown as an inferior product by insinuating Raw deserved more elite talent by extension of a longer runtime.

Some of the best in-ring workers under the WWE banner went undrafted while seldom used talent heard their name called. In what world is Titus O’Neil more valuable to WWE’s television product than Apollo Crews? Barring a move to NXT, how can WWE justify scripting Harper to go undrafted after an explosive return that led to a marquee match against two of WWE’s top talents in Daniel Bryan and Reigns? And more importantly, why has WWE already severed his alignment with Erick Rowan? Finally, Cesaro deserves an apology.

Though their draft position might seem nonsensical from a kayfabe (or the preservation of realism) standpoint, that is more an indictment on WWE Creative’s booking than the performers themselves. It is refreshing to see the Cruiserweights acknowledged in the actual draft rather than being relegated to undrafted free agent status. Since 205 Live’s inception, the Cruiserweights have been treated like such an afterthought that it has become difficult to invest in their efforts. Moving from 205 Live to Raw or Smackdown has been considered a graduation. Hopefully, their inclusion in the draft will lead to renewed emphasis on the Cruiserweight division

WWE and FOX did a great job selling the draft as a big deal. FOX offering its biggest television personalities lent a renewed sense of credibility to the WWE product. Watching Troy Aikman and Jay Glazer discuss draft strategy and inside scoops was just a plain old bit of fun that should supplement every WWE offering.

Keeping Roode and Ziggler together

These two have incredible chemistry. After losing the Raw Tag Team Championships to the Viking Raiders, it seemed inevitable that WWE would prematurely separate Ziggler and Roode. Instead, WWE is allowing them to build on their momentum by transferring them to Smackdown, where they won’t be burdened by a fruitless effort to regain the tag titles from a Viking Raiders team destined for an extended title run.

Becky Lynch is the hottest star in WWE at the moment, male or female. Having her drafted anywhere other than No. 1 would have felt like a collective slight against the women’s division as a whole. Since turning heel against Charlotte at SummerSlam, Lynch has taken the torch and run with it. It was because of Lynch’s superb character work that the women main evented Wrestlemania. It was Lynch who carried a post-Ronda Rousey women’s division on her back. It was Lynch who identified a stale character and revived it using her own merit. Charlotte is the GOAT of WWE women, but if Lynch can find a way to maintain her momentum, she is going to have a legitimate claim at that title.