50-50 booking ensures no one gets over

Is WWE Creative ruining its stars? 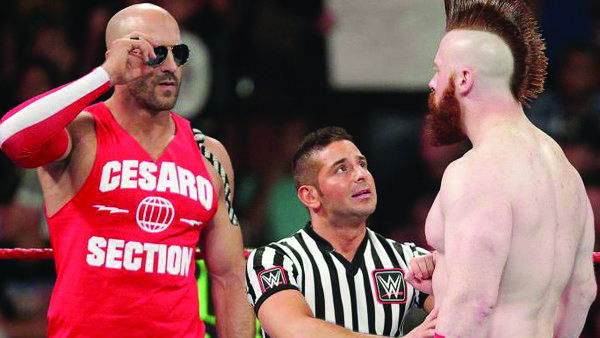 WWE has a star problem. No, this isn’t a job for Space Force, this is a problem for the bookers. Ask most fans about what is holding back WWE from reattaining the heights it once knew in the Attitude Era, and one common answer will be lack of star power. There’s no The Rock. No Stone Cold. No Triple H. No Undertaker. While this perceived lack of star power can be blamed on inconsistent pushes, nonsensical storylines, an overreliance on returning legends or just a plain lack of talent, the truth is no one looks like a superstar because they aren’t allowed to build on their momentum. Thanks to WWE’s even-steven style booking, no one is allowed to stand out from the pack.

When viewed through an objective lens from a pure wrestling standpoint, WWE arguably has the most talented roster in its storied history. The amount of potential dream matches that can take place between the Raw, Smackdown, NXT, NXT UK and 205 Live rosters is astonishing. But despite all this talent, there is a general sense of apathy towards the WWE product from their casual fans, an indifference that stems from 50-50 booking.

In a nutshell, 50-50 booking is the trading back and forth of wins between superstars in consecutive matches. In the first match, wrestler X beats wrestler Y. The next week, wrestler Y “regains his heat” by defeating Wrestler X, kicking off a vicious cycle that benefits neither performer. While this may seem like a sound idea in theory, particularly when you’re dealing with two midcard or up-and-coming performers in need of a win, the truth is that if no one is allowed to build off of a win, then no one can stand out as a star.

Let’s take a look at the 2017 feud between Kevin Owens and AJ Styles over the United States Championship. Both men were, and still are, appreciated by most fans and the idea of these two engaging in a feud was an exciting prospect. Unfortunately, the feud turned out to be a dud from both a storyline and in-ring perspective, with neither man leaving the feud in better shape than when they entered it. One of the primary issues was 50-50 booking. At Backlash 2017, Owens defeated Styles via countout, only to lose the rematch at a house show. Owens then regained the belt at Battleground 2017 but lost it two nights later on Smackdown. Owens lost their final two encounters to end the feud. Rather than feeling like an even matchup between two bitter rivals, it felt like WWE was spinning its wheels for the sake of filling time. While the matches listed were one-on-one encounters, they also took part in numerous tag and multi-man matches. When wins and losses feel arbitrary and don’t serve the story being told, how are wrestlers supposed to get fans invested in their performances?

50-50 booking isn’t only exclusive to wins and losses, nor is it even restricted to the same pair of feuding wrestlers. Earlier this year, Buddy Murphy became involved in a feud between Roman Reigns and Daniel Bryan. Murphy, who hadn’t been featured on the main roster prior to his involvement in the Bryan-Reigns feud, lost to Reigns but managed to gain something in defeat via a stellar in-ring effort. He than had a match against Bryan, which he won. Suddenly, the sky seemed to be the limit for the “Best Kept Secret” in WWE. Then Murphy was beatdown by Erick Rowan and jobbed out to Ali in a first-round matchup during the King of the Ring tournament. Murphy made the most of his opportunities with two really strong performances, only to be rewarded with two devastating losses that set him back to square one. Murphy hasn’t appeared on WWE TV in weeks, which is a real shame considering how remarkable his work is whenever he receives an opportunity.

There are too many examples of 50-50 booking to go through. Andrade, Rey Mysterio, Apollo Crews, Cesaro, Ricochet, Drew McIntyre, Samoa Joe, Braun Strowman, Robert Roode, Dolph Ziggler and so many more could become main event talent if only given the consistent booking they need. Need further proof? I got two words for ya: Kofi Kingston.

Kingston had long been considered a perennial midcarder and a serviceable talent who had run-ins with main eventers but always came out on the losing end. That all changed with #KofiMania. Kingston was able to get over organically with the fans, and it led to his first WWE Title win in his 11-year career. Kingston would then go on to win a series of strong matches, allowing him to  solidify his status as a main event guy. In fact, the only dip in his reign so far has been when WWE employed 50-50 booking to extend Kingston’s feud with Randy Orton.

Wins and losses should matter in WWE. When the audience is painfully aware that the title holder will lose non-title matches to set up title feuds only to win when the belt is on the line, nobody benefits. When a young talent beats an established star and the first thought isn’t, “Wow I wonder where they go from here,” but rather, “I wonder when so-and-so will get their win back,” then wins and losses lose their meaning and interest inevitably wanes.

Not everyone can be a main event talent, nor can everyone carry the belt or be a top guy in the company. But if WWE keeps all of their talent in a perpetual state of purgatory, then it is ultimately the fans who will do the job.