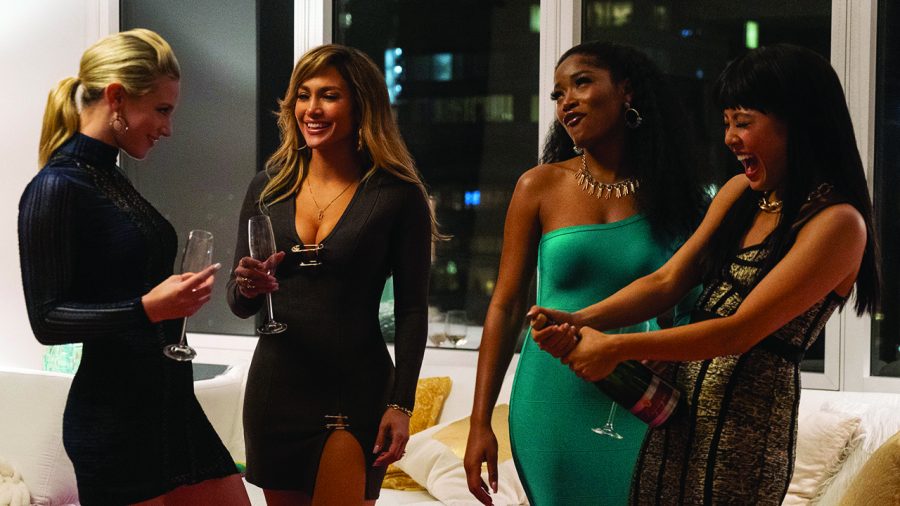 Based on the 2015 New York Magazine article by Jessica Pressler “The Hustlers at Scores,” “Hustlers” tells the tale of a group of exotic dancers who commit credit card fraud in order to survive the 2008 Great Recession. A hustler is someone whose ambition drives them to questionable acts, which is exactly what the movie shows. With an impressive $33 million at the US box office on its opening weekend and even Oscar buzz for the actress Jennifer Lopez, “Hustlers” is a funny and entertaining movie about female friendship.

The movie tells the story of Destiny (Constance Wu), a poor woman who strips to be able to provide for her family. In the club, she meets Ramona (Jennifer Lopez) and from there they form a solid friendship. Ramona ends up taking Destiny under her wing, teaching her how to pole dance and do lap dances with the help of none other than Cardi B.

Ramona and Destiny recruit a few more strippers to work with them in a credit card fraud scheme. They drug their Wall Street customers, use their credit cards to their limits and then cash out the rest of the money. The Hustler’s mindset is that no man would ever have the courage to go to the police and report the loss of thousands of dollars in a strip club.

The film starts in 2007 and goes all the way to 2011. The costumes, makeup and soundtrack help set up the time period. All aspects were really taken into consideration, with a focus on the soundtrack. A surprise cameo brings back that 2000s feeling we all know.

Even though the movie is set mostly inside a strip club, this is the background for the center of the film’s main theme of female friendship. The strip club is a competitive environment but it doesn’t shake their bonds, it actually makes them stronger. After years of watching women treating each other horribly on account of men, it is invigorating to watch these bonds strengthen throughout the movie.

Family is a big topic in the movie, especially coming from Ramona. There are various moments where she says she’s only a stripper so she can provide for her daughter. Destiny starts doing it to help her grandmother, the person who took care of her all her life. At the same time, one of the other girls, Annabelle (Lili Reinhart), was kicked out of her home when her parents found out what she did for a living. In the end, they become a huge family that is about sisterhood, not blood.

The acting is really good, but the Oscar buzz may be a bit much. The actresses are compelling and all do a good job selling their roles, and Lopez performs the character Ramona with great enthusiasm. Nevertheless, it is definitely not Oscar material. While representing a personal best for her, the role didn’t really push Lopez’s performance to the point where an Academy Award is really feasible. And none of the other actresses delivered award-winning performances along the way either.

Written and directed by Lorene Scafaria, the positive feminine energy is palpable during the whole experience. With an almost exclusively female cast and crew, Jennifer Lopez co-producing it along with Gloria Sanchez Productions, Nuyorican Productions and Annapurna Pictures really rounds out the female-centered production values.

Overall it’s a funny and realistic movie that shows the lives of these strippers who tried to survive the best way they could. The characters didn’t sugarcoat their criminal actions, and the bonds between them are moving and resonates strongly with the audience.