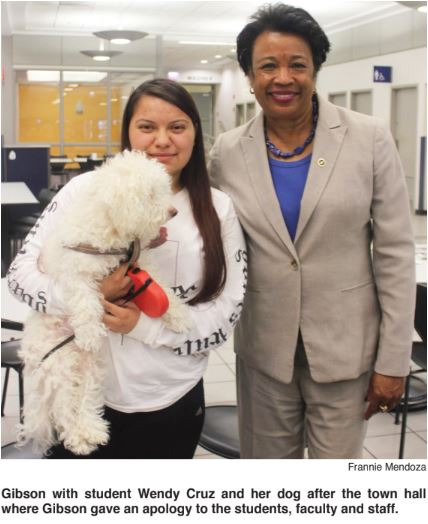 President Gloria J. Gibson affirmed that she herself had picked former White House press secretary, Sean Spicer, as a speaker in the Daniel L. Goodwin Lecture Series during a Town Hall meeting.

This was only one of the student and staff questions posed to her during the approximately 40 minute-long open microphone session held in NEIU’s cafeteria.
Dr. Gibson began the meeting with an apology to the students, faculty and staff.

One of the first questions directed at Gibson was on the intentions behind bringing Sean Spicer to the institution.
Gibson responded, “We are facing a critical time. We have a presidential election next year. We need to as a campus and certainly as young people, be informed about what the issues are that are facing us as we move forward in the 2020 election.”

Next to speak was Carolina Schwartz, who faced the president with her true feelings on the decision to move forward with the event and asked what it would have taken other than the inspiring petition letter signed by several hundred students and teachers to change Gibson’s mind on the invitation.

Schwartz said, “I think it’s important that we validate everybody’s feelings, in my opinion, it was kind of a slap in the face.”

Gibson responded to this by reminding the crowd that she had supported students through her support of their protest.

This response was followed by a question from NEIU Independent News Editor and communications, media and theater major, Rebecca Denham.

Denham asked, “So earlier when you said it was a decision that you have made, does that mean that you yourself specifically picked Sean Spicer to speak here?”
Gibson hesitated, but then responded, “Yes.”

Denham continued, asking Gibson if her communication or lack-there-of may have attributed to the upset feelings of the university community. Gibson admitted that communication was poor, but that she could not use that as an excuse.

Gibson said, “So everyone sort of found out [about Spicer coming to campus], and then they waited and waited, and I was waiting and waiting trying to determine if the campus was going to be safe. That was important to me and so there was delayed communication.”

As a follow up to Gibson saying that she wanted to wait until she felt campus was safe to announce Spicer’s attendance, another student posed a question later in the meeting about why she had still allowed Spicer to attend if students, staff and faculty all directly expressed that they did not feel safe having him on campus.

Following that question, another student, Chuck Sipps, NEIU Independent Arts & Life Editor and a communication, media and theater major, asked Gibson if she had waited to tell students about Spicer to ensure that they would protest, which would, in turn, draw media attention to the university.

Gibson responded that she would not engage in that kind of behavior.

An NEIU student, majoring in computer science, then asked about the influence that Daniel L. Goodwin, NEIU alumnus and funder of the lecture series, has on picking people for the series.

Gibson replied by saying that Goodwin’s donations to the university not only fund the lecture series, but also many scholarships throughout the university.

Gibson talked about the selection process for speakers: “So sometimes it’s a matter of who’s available. And who, I know that $25,000 is a lot of money, but for some speakers, you’re talking about fifty thousand, a hundred thousand.”

Another student, majoring in social work, then came up to ask why Gibson had not attended the previous town hall and why she had waited until now, after the protest, to meet with students.

Gibson responded to her failure to attend saying it was not intentional and, “I just could not rearrange my calendar to be here…I respect that you wanted to hear from your president.”

Dr. Adrian Castrejon, assistant professor of justice studies, also felt strongly that Gibson should have attended the previous Town Hall, highlighting the fact that many students expressed strong emotions that should have been heard.

Casterjon went on to tell Gibson that he was concerned and as a faculty member of NEIU, he felt somewhat responsible for the students’ pain because he represents the university. He said, “I’m really, really struggling with what is next for faculty and staff who are here supporting our students. I honestly don’t know what to do.”

Casterjon said after the event, “I know that all students’ questions were not answered, which is crucial for this work to continue and for students to start healing from this. Yet I am glad that she reached out because it allowed for this conversation to start, which at this point was the most important step. But, we cannot end this work here. I encourage students to continue to hold us accountable and to continue to look for answers.”

Gibson began wrapping up the meeting by reiterating that she plans to work more closely with the SGA and said that, “Students are our major constituent group. That’s why we’re all here to serve students. I work every day to serve you, every day. Every day. And it is my passion. It is not a job. It is what I do. It is who I am.”

Gibson finished by saying, “And I look forward to better communication so that, where the trust was broken, we can rebuild that.”

Following the meeting the new Provost for NEIU, Dennis Rome, who was also in attendance, mentioned how impressed he was with the students’ professionalism and respect when asking their questions.

Rome said, “It made me feel really good about the character of our student body here. I think we have some of the best students in this state.” President Gibson agreed.