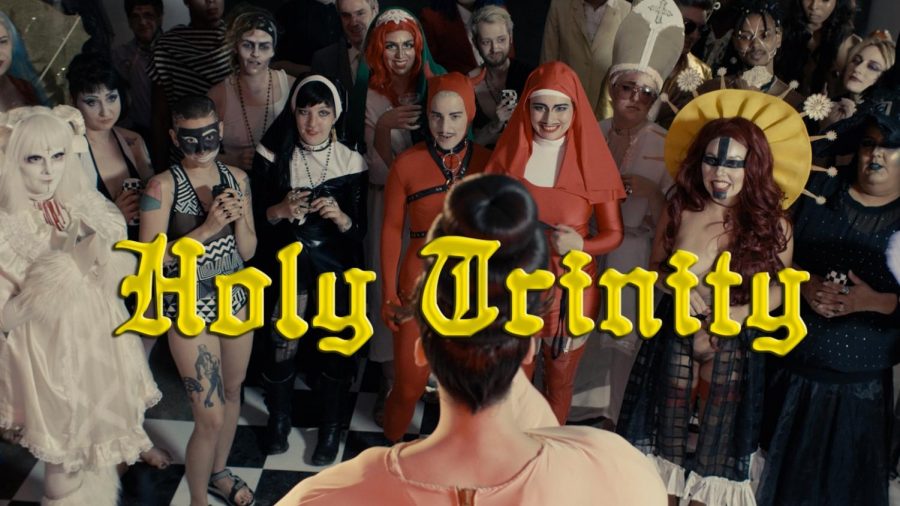 The debut film of writer, director and lead actor Molly Hewitt, a Chicago-based performance artist who goes by the name Glamhag, Holy Trinity is the next feature film to be released by the local non-profit film production outfit Full Spectrum Features. The organization, headed by producer Eugene Sun Park, was behind the 2017 web series Brujos (creatively led by writer-director Ricardo Gamboa) and the 2017 feature Signature Move (directed by Jennifer Reeder and starring and written by Fawzia Mirza.) Full Spectrum specializes in realizing the work of talent in and from Chicago and, like its name would suggest, talent from the fullest possible spectrum of human identities.

Holy Trinity is a world populated by Trinity, the protagonist, and her a group of equally fascinating and wonderful friends. Trinity, a dominatrix with hot pink-orange hair, is joined by her non-binary partner Baby, roommates, clients and a card reader named Laura. We see these characters, who occupy an all-encompassing array of sexualities, gender non-comforming and sexual fetishes work, play, party, frolic and love. Hence, the movie aptly boasts a gloriously colorful mise-en-scene, with every frame bursting in all shades of color. Costuming, hair and make-up, production design and lighting feature citrus tones, pastel hues and a deft combination of primary and complementary colors throughout. In the key Sunday church scene, black and white patterning is used with pops of statement red. In terms of both mise-en-scène and casting, everything about Holy Trinity is bold, loud and proud.

Trinity, a lapsed Catholic schoolgirl, discovers that she can speak to the dead when she huffs Orisha Oko Spray (a mysterious aerosol can of unknown ingredients) and finds no help at all when returning to a Roman Catholic religious source. The religious iconography throughout is important to Hewitt, who seeks to contrast her character’s liberatory lifestyle to the oppression that her education and upbringing represents to her. Trinity’s new ability puts pressure on her relationship with Baby, directing her to rethink how much space she has been taking in the relationship. By the end of the film, Trinity is able to learn how to use her newfound gift towards mediating between grieving people and their dead loved ones, creating the opportunity for reconciliation. She even becomes social media famous to the point of inspiring a trending hashtag, #HolyTrinity.

I understand what Holy Trinity is attempting to do. Media representation for queer and sexually fluid have been wanting for so many people for what seems like so long that their mere presence on the big screen is a landslide triumph. But a movie like Holy Trinity begs the question: what kinds of stories are X (replace with the name of any social group) identity telling? In one sense, I wanted to know who the characters in this film were beyond their sexual and non-gender conforming identities; if they have certain sexual fetishes or practices, why? Are they related to certain past trauma or experiences? These sorts of practices don’t have to be rooted in some deep-seated pain, but Hewitt gives strong hints that they are, and doesn’t flesh out, for example, the effect of Trinity’s Catholic schooling on her affinity for domination in her work and pleasure. I want to understand the experience of being raised by one set values yet feeling out of place in one’s own skin. What is the texture of that experience, what does it feel like from the inside and who are you now since you have outgrown the early years that formed who you used to be? I had these and many other questions for the writers but felt that the movie was void of answers. This sort of more nuanced character development could have allowed the rather simple plot machination to be driven by more than a single point (the point that Trinity discovers the ability to speak to the dead but does not know what to do with it). I felt that Hewitt has much more to say on not only religion but also on other matters of spirituality, such as seeking the services of someone who acts as a medium between oneself and a beloved dead person. Hewitt grazed the subject of the possibility of exploiting the service provider-client relationship, but we don’t hear much about it. Holy Trinity is a worthwhile film, enjoyable for its portrayal of diverse identities, but ultimately lacks in depth.

Holy Trinity will premiere at the Music Box Theatre in Chicago on Friday, Sept. 27.