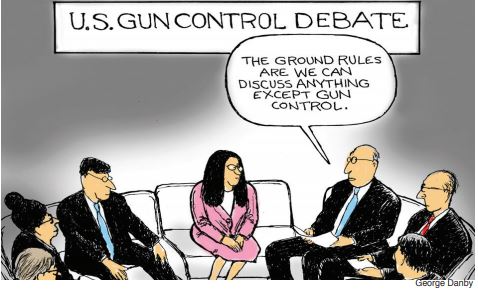 “The intensive, three-week Kinderguardian course introduces specially selected children from 12 to 4 years old to pistols, rifles, semiautomatics and a rudimentary knowledge of mortars. In less than a month — less than a month — a first-grader can become a first-grenade-er. Happy shooting, kids.”

It’s 2019 and the American people are divided over the issue of gun control. The left is pushing for more legislation to regulate firearms. The right believes the right to own firearms is a constitutionally protected choice that requires no government intervention.  Neither side is willing to give in. So what do we do?

The most effective course of action is to provide the American people with facts and have faith that we are intellectually capable enough to come to our own conclusions. Unfortunately, with the emergence of social media as a primary news source, misinformation is spreading at an unprecedented rate. For both the liberal and conservative platforms, emotion has taken precedence over rational dialogue. The debate surrounding gun control has devolved into an argument based on intuition rather than fact. So the simple solution would be to sift through the misinformation and detail what the gun control debate is actually centered around.

Gun enthusiasts oftentimes oppose both groups. Pro-gun lobbyists argue that a prohibition on guns would incentivize crime rather than deter it. It would leave Americans vulnerable to criminals who, according to the pro-gun faction of America, will get their hands on guns anyways. They assert that it’s people, rather than guns, that commit murder. An inanimate object cannot, by itself, commit a crime.

Gun control advocates counter by stating our current set of laws is not working.  They point to the unprecedented amount of mass shootings. They point out that the U.S. has six times as many mass shootings as the global average, relative to population.

Telling either side they are wrong would be a thankless task.  What we can do, however, is dissect common arguments and misconceptions pertaining to gun legislation.

Chicago has strict gun laws and it’s still the murder capital of the U.S.

This is both correct and incorrect.  What’s correct in that Chicago has a blanket ban on firearm sales.  What’s also correct is that Chicago experienced a disconcerting amount of gun crime.  However, to suggest that Chicago is the gun capital of the U.S. is false. In fact, depending on the population parameters of the list, Chicago doesn’t even rank top 20 in gun crime per capita most years.

Second, it’s important to put into context why Chicago’s gun laws are ineffective. Similar to our gun laws, Chicago has a ban on the sale, possession or use of all “consumer fireworks.”  Despite this, Chicago residents find a way to access fireworks. Strange how that works.

The issue is Chicago’s neighboring states. For example, a 40-minute drive east to Indiana brings us to a state that does not require a permit or license to purchase firearms.  Furthermore, Indiana does not require unlicensed buyers to register their newly obtained firearms. The kicker? Indiana has a system of laws in place that allow certain types of buyers to forego background checks, particular those engaging in a transaction with a private seller.

In Illinois, six out of 10 guns used during the commission of a crime emanate from out of state. 21% of those guns come from Indiana. Chicago’s gun laws are essentially rendered meaningless by the lax gun laws of surrounding states.

The data is mixed on this issue.  In 1996, the United Kingdom and Australia experienced consecutive mass shootings that resulted in a legislative upheaval.  In response, the UK passed the Firearms (Amendment) (No. 2) 1997. The aggregate amount of homicides, attempted murders and other “serious offenses” involving firearms spiked significantly in the immediate aftermath of the new legislation, increasing from 859 in 1996 to 1,461 in 2004. However, since 2004, violent crime and serious offenses involving firearms has decreased significantly, dropping by 41% from 2006 to 2019.

Japan, a country with such comprehensive gun legislation that it essentially operates as a gun ban, is home to 127 million Japanese men and women.  Japan has a blanket ban on handguns. In order to obtain a shotgun or air rifle, you must submit to a criminal history check, a mental health evaluation and a drug test.  You must also attend an all-day class, pass a written test and pass a shooting range exam with at least 95% accuracy. Police must be notified where and when you are storing a firearm.

These two arguments usually come consecutively. Guns are, and always have been, instruments used to kill. This argument is the equivalent of contending that we should legalize explosives because an inanimate object cannot, by itself, maim or kill.

According to FBI databases, there were 586% more homicides by gun than homicides by knife in 2016.  Furthermore, in the history of the U.S., there have only been two mass stabbings in a public space that resulted in death. The first occurred on a train in Portland, after two victims succumbed to a knife attack at the hands of Jeremy Joseph Christian.  The second occurred over a two-hour window in Orange County, California, resulting in four deaths (seven other mass stabbings have been recorded, though they either took place in a private residence or resulted in zero casualties, with a single exception).

4. This is a mental health issue, not a gun issue.

This argument implies that mental health issues are a problem exclusive to the U.S.  Even if we were to entertain this argument as legitimate, a Republican majority house blocked a measure that would require the Social Security Administration to report certain mental health prohibitors to the National Instant Criminal Background Check System (NICS), a database responsible for determining a buyer’s eligibility to purchase at a licensed dealer. This measure prevented 75,000 Americans from being disqualified from legally purchasing firearms from licensed dealers.

As it stands, America is locked in an indefinite stalemate on how to address the gun crime epidemic. What seems certain, however, is that our current set of laws is ineffective and have contributed to an unprecedented amount of mass shootings. A change is necessary.  Unfortunately, what is considered corruption in other parts of the world is considered lobbying here. We can not continue to allow organizations like the National Rifle Association (NRA) to fund our elected representatives. We cannot sit idly by as our children are slain in academic, professional and social settings. We cannot allow organizations like the American Legislative Exchange Council (ALEC) to afford corporations with a vested interest in maintaining the status quo a voice in our congressional chambers. Most importantly, though, it is time to collaborate and compromise using facts rather than social media sentiments.