Has Rey Turned to the Dark Side?

The Rise of Darth Rey 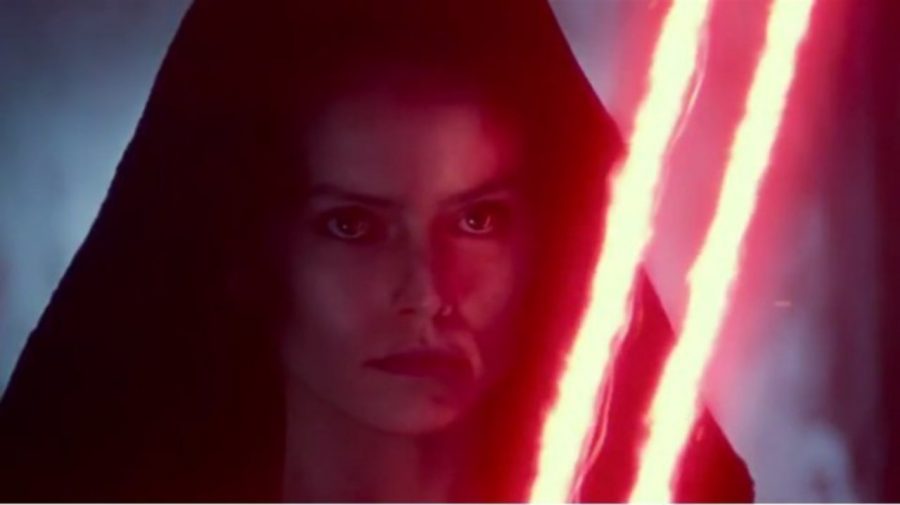 The second trailer for “Star Wars Episode IX: The Rise of Skywalker” came out of Disney’s D23 expo and audiences were exposed to the next shocking twist in the “Star Wars” saga. At the tail end of the trailer, we are shown a shot of Rey, looking far more sinister than she ever has before. Robed in black and wielding a dual-red-bladed lightsaber, these are the hallmarks of the Dark Side. So, what’s the deal here? Has Rey fallen to the Dark Side, or is something else afoot? While we won’t have any definitive answers until the film’s release, here are some possibilities.

It’s a Vision of the Dark Side

There have been numerous examples of the Dark Side being used to cloud the truth throughout Star Wars history. In “The Empire Strikes Back,” Luke enters a cave on Dagobah and confronts a Force Vision of Darth Vader. In “The Force Awakens”, Rey finds Anakin Skywalker’s lightsaber and she too is gifted with visions through the Force. This could be another one of the many examples of Force Visions in Star Wars. Could it be the returning Emperor Palpatine tempting Rey to the dark side with visions of power? Or maybe it is Kylo Ren’s innermost desires embodied by the force? While this might not seem like the most intriguing of solutions, it would depend on the follow-through.

Rey is a Clone

This theory has two clone possibilities. One, that Rey is an escaped clone, or two, Dark Side Rey is a clone of the real Rey made by the First Order. The first theory is that Rey has always been a clone, possibly created by Emperor Palpatine. Clone Rey escaped as a child and was hidden away on Jakku. This kind of story has happened before in Star Wars before. In the video game “The Force Unleashed II,” Darth Vader’s secret apprentice Starkiller, who was killed in the original “Force Unleashed”, is reborn through a cloning process. Darth Vader oversaw the experiment and ordered thousands of Starkiller clones to be created. Only one of these clones was able to use the force and would eventually turn against Darth Vader. Perhaps Rey is a similar case. Disney’s Star Wars has borrowed from legend stories before, and this could be another example of that.

The other option for the Clone theory is that the First Order attained some of Rey’s DNA, possibly when she was captured at Starkiller Base, nope not that Starkiller, in “The Force Awakens.” From the same film, we learn that the First Order has access to cloning tech, when Kylo Ren threatens General Hux with replacing his human First Order Troopers with clone ones. If Kylo can’t get the original Rey to turn, he may have settled for a cloned one.

Now it’s time to acknowledge Occam’s Razor. It is the idea that the most obvious answer is usually the correct one. If we see a fallen Rey, then it may be because Rey has fallen to the Dark Side. In the “Last Jedi,” Luke Skywalker comments on how quickly Rey turned towards the Dark Side when it offered her something she wanted, in that case, the identity of her parents. The Dark Side is temptation incarnate and it may offer Rey a power or knowledge she craves. It wouldn’t be the first time we have lost a hero to the dark. Anakin fell to the Dark Side in the Prequel trilogy, Luke Skywalker nearly fell in “Return of the Jedi” and Ben Solo fell between The Original and Disney trilogy. It may only be fitting that Rey joins the long line of failed heroes.

Ben Solo is a Double Agent

Now this one is a doozy. The theory is that Kylo Ren, aka Ben Solo, has been a secret light side agent all along. When he says to the charred helmet of Darth Vader that he wants to finish what Vader started, it is not the extermination of the light he seeks but rather the dark. Ben senses that the Emperor still lives and wishes to finish his grandfather’s work by stopping Darth Sidious once and for all. This gives new context to many of Ben’s words and actions throughout the trilogy. When he tells his father, Han Solo, that he knows what he must do but doesn’t know if he’s strong enough, it isn’t that he desires to kill Han, but rather desires to prove his allegiance to the Dark Side. It is also possible the Ben foresaw Rey’s fall. In the “Last Jedi” he says to her, “When the time comes, I know you’ll be the one to turn.” Rather than tempting Rey to join him in the dark, it is a warning to not abandon the light. This is the most far-fetched of the theories but no less interesting for it.

Rey is Possessed by the Emperor

When the Emperor returned from beyond the grave in the Legends comics, he did so by transferring his soul from clone to clone or by possessing other force users. “Rise of Skywalker” director JJ Abrams has stated that Emperor Palpatine will indeed appear in the flesh. If that is the case, then the Emperor must be ancient at this point. It wouldn’t be a stretch to think that the Emperor desires a younger vessel to replace his old one. This could explain why Palpatine was so interested in young Anakin Skywalker, and why he was so dismayed when his young apprentice’s body was horribly disfigured in the fires of Mustafar. Rey could be the Emperor’s second chance at a new life in a vessel already powerful in the force.

This one is pretty straightforward. Rey is pretending to betray the light to infiltrate the dark. It may even be that Kylo Ren is aware of this potential betrayal but believes in allowing Rey to pretend to embrace the darkness, she might be consumed by the Dark Side.

Those are all the theories we can think of. Have any thoughts or ideas we didn’t mention? Comment below and make sure to check back for more news at  https://neiuindependent.org/