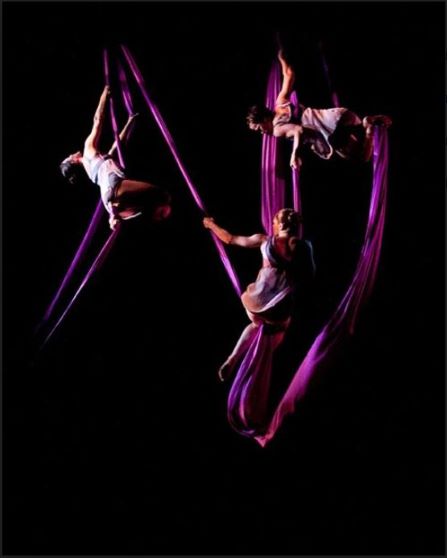 “Higher Ground” is a nine-part aerial dance performance in which most of the dance takes place using silks and ropes that the dancers perform on.

What struck me about the first part, “The Phantom Beside Me,” was the amount of trust these dancers had in each other. It was a very intimate dance between the four performers that required a lot of awareness of one’s own body.

The next part of the performance, “State Of Being,” involved more synchronized movements of a large group of dancers. The music by Balmorhea fit well and added nuance to the choreography. There was one dancer centerstage. The blue lighting was very calming.

I loved the third installment, called “Stacked.” There were three dancers in the piece. The music had a tone of urgency because it was more percussive. The performers were suspended at different heights in a sort of human ladder. They did a lot of acrobatics.

“Made Of Stardust” was the only piece with just one dancer. The night that I saw the production, Hannah Rosenfeld was the solo dancer. The music had a celestial theme to it, as did the lighting. Throughout the piece, Rosenfeld showed a lot of strength and grace. The pale silk that she performed on was reminiscent of a crescent moon. When the music of the piece started, I thought of the movie “Interstellar,” because it made me think of outer space.

‘Dragging Along’, the fifth part of the performance, included eight dancers and two songs. The first half of the piece had more subdued music by Dave Von Ronk. The second half had more energetic music and brighter lighting. The choreography of this part of the piece had quicker movements. A song by Johnny Cash was played during this part.

The sixth piece of the production, called “The Less Explainable Soul,” had five performers. The gentle music and the chorus of this part of the production made me think of gravity. I thought of literal gravity, as well as the metaphorical kind involving letting go of your own fears. The lighting was also complementary to the gentle nature of the piece.

“Changing Winds,” the seventh part of the production had only two dancers. The music and lighting in the piece crafted a melancholic feeling. The choreography involved the dancers alternately being stage center. They danced slowly using silk and were held in the air for a long time, which made it more suspenseful. It was an interesting piece to see, because of the skill and strength needed to perform it.

The eighth piece of the production was called “Undercurrent.” The name of this piece applies on both a literal and an emotional level. The music by the group called Stars had a melody that suggested a subconscious feeling that appears at random times when you are reminded of something from a while ago or someone that you knew before. The choreography of the dancers sometimes took the form of waves, like waves in the ocean.

The last part of the production  “Higher Ground” had all of the dancers participating. The piece was accompanied by the music of five different artists. The one that stuck out to me the most was the more dramatic-sounding song which included violins. When the more dramatic song was playing, there was more fluid choreography on the ground.

One of the things I most appreciated about this production was the selection of music. I enjoyed the simplicity of the costumes for all the performers because they were very practical for the choreography. The lighting design was great for transitioning between different moods and themes within the production. With the type of choreography in each piece of the show, I could tell how strong all the dancers were.

Really early on in the show, I was struck by how many different body types the dancers had, and how refreshing that was as a female viewer in particular.  The company had been rehearsing since April for this production. Overall, I am really glad that I saw this performance, and I would definitely recommend seeing something from the Aerial Dance Company.