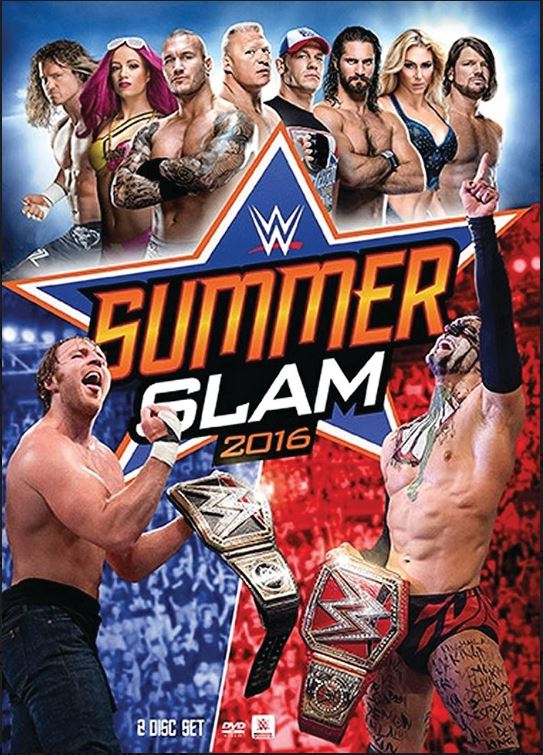 WWE’s 32nd annual SummerSlam pay-per-view event, hailing from Scotiabank Arena located in Toronto, Ontario, Canada,is the culmination of WWE’s summer storylines.. There were plenty of great moments, but SummerSlam lacked in some areas. It was a 12 match card with three matches on the pre-show and nine on the main card. This is the definitive SummerSlam Report!

Drew Gulak retained his Cruiserweight Championship after he defeated Oney Lorcan in a singles match. Buddy Murphy defeated Apollo Crews by disqualification after Erick Rowan interfered and attacked Murphy. The WWE Women’s Tag Team Championships Alexa Bliss and Nikki Cross retained their titles after defeating The Iconics (Payton Royce and Billie Kay)., These matches all earned C average grades because there wasn’t really anything that shocked me.

Raw Women’s Championship — Becky Lynch defeats Natalya to retain the Raw Women’s Championship: This was a great match! It was different from all of the other matches because the only way to win was by submission. It’s been a while since a high caliber submission match. The crowd roared for hometown favorite Natalya as she made her way to the ring. I honestly thought that WWE’s creative team would’ve scripted Natalya to win in her home country, but I was mistaken. Her best move of the match was the Bret Hart patented Sharpshooter submission hold off of the top rope. Natalya tapped out after she was locked into Lynch’s Disarmer submission hold.
Grade: B+

Goldberg defeats Dolph Ziggler: The last time the WWE universe witnessed Goldberg in action, he wasn’t at his best. He had numerous botches and he looked out of shape against the Undertaker. Goldberg was the complete opposite at SummerSlam. He looked rejuvenated. Ziggler surprised Goldberg with a couple of super kicks, but Goldberg turned up the heat. Goldberg delivered a quick spear and a jackhammer to put away Ziggler. As Goldberg was making his way backstage, Ziggler grabbed a mic and begged Goldberg to come back to the ring to face him like a man. Goldberg served Ziggler another spear and exited the ring. An exhausted Ziggler grabbed the mic again and claimed that Goldberg got lucky twice. Goldberg made his way back to the ring and gave him a third and final spear. From the great words of the commentator Renee Young, “Dolph has lost his damn mind.”
Grade: B-

United States Championship — AJ Styles defeats Ricochet to retain The United States Championship: This feud between Styles and Ricochet has been great for business. The high-flying offense of Ricochet pairs well with Styles’s veteran in-ring abilities. Styles was accompanied by Karl Anderson and Luke Gallows and they served as distractions in order to help Styles retain the United States Championship. One of the most jaw dropping moments of the night happened towards the end of this match. Ricochet attempted a Phoenix Splash off the top rope, but he was caught in mid air. Styles reversed Ricochet’s move into his patented Styles Clash for the pinfall. After the match, Styles and his lackeys performed their patented Magic Killer on Ricochet.
Grade: A-

SmackDown Women’s Championship — Bayley defeats Ember Moon to retain The Smackdown Women’s Championship: The Toronto crowd was high energy until this match. There wasn’t really much to comment on about this match. Both women performed well, but I feel like something more could’ve been done to truly shock the crowd. I was hoping that Moon would win; however, regardless of her losing, I was highly disappointed with this match.
Grade: C-

Kevin Owens defeats Shane McMahon: In recent weeks on SmackDown Live, Owens has been on a Stone Cold Steve Austin style rampage. He’s saying what many fans are saying right now. “Why in the hell is Shane getting all of this TV time?” This was probably the funniest match of the night. It had a serious stipulation because if Owens lost, he would have had to quit the WWE entirely. Elias served as a ringside enforcer for McMahon. Everytime it seemed like Owens would gain the upper hand, Elias would stop Owens. Owens finally capitalized by doing a cannonball roll from the side of the ring that knocked down both Elias and the referee. Owens made sure Elias was fully immobilized before turning his attention back to McMahon. When the referee finally gained his wits, Owens distracted the referee in order to give McMahon a well deserved low blow. Owens delivered a Stunner and won by pinfall.
Grade: B

Charlotte Flair defeats Trish Stratus: This match had a slow start, but it ended on a good note. Stratus showed the WWE universe that she hasn’t lost a step being in a WWE ring. She competed really well with Flair by hitting her patented Stratusfaction and Chick Kick. I was surprised to see that the WWE creative team didn’t script Toronto’s very own Stratus to win over Charlotte. Sadly, this was Stratus’s retirement match. Overall, it was a decent contest.
Grade: C+

WWE Championship — Kofi Kingston versus Randy Orton ends in a double count out. Kofi retains the WWE Championship: This was the most dissatisfying match of the night. This rivalry has been relevant for over ten years, and I really can’t believe that the WWE creative team thought it would be a great idea to have the match end that way. Even the crowd chanted “bullshit” repeatedly after the match ended.
Grade: D-

“The Fiend” Bray Wyatt defeats Finn Balor: For weeks, Bray Wyatt has been teasing the WWE universe about a new persona. He used his kid friendly show, Firefly Funhouse, as a facade for the new persona. After Balor made his way to the ring, his confidence evaporated as the lights went out. The intro for Firefly Fun House played on the screen, but it instantly became distorted and black as a scarlet red “LET HIM IN” flashed on the screen. The Fiend crept through the darkness with a grotesque lantern thats aesthetic isn’t common in this PG era of the WWE. A decapitated head was illuminated with a misty blue light. I think the lamp is supposed to simplify Wyatt’s former self as he is now consumed by The Fiend. His face is now covered by a monstrous mask. Balor was struck with fear and intimidation by Wyatt’s new gimmick. Balor didn’t stand a chance against The Fiend. I am excited to see where Wyatt takes this new persona.
Grade: A

Universal Championship — Seth Rollins defeats Brock Lesnar to win the Universal Championship: Once again, we have a new Universal Champion! After Extreme Rules, Lesnar has been putting Rollins through hell. For a moment, it seemed like Rollins wouldn’t even make it to Toronto for SummerSlam. He lived up to his promise and went toe to toe with the Beast. I truly didn’t think that Rollins would be scripted to win over Lesnar, but I am extremely happy that I was wrong. The WWE is better with the Universal Championship or any major title out of Lesnar’s hands. Lesnar’s contract with the WWE states that he doesn’t have to show up every week while he is champion. As WWE superstars compete on the weekly Monday Night RAW and Smackdown Live shows, he is only there when a big pay-per-view is near or just passed. He doesn’t have as many bumps and bruises as the other superstars. He only has to show up for the major pay per views. It took three curb stomps from Rollins to put down the beast once and for all.
Grade: A-