Self-Care is How We Take Care of Each Other 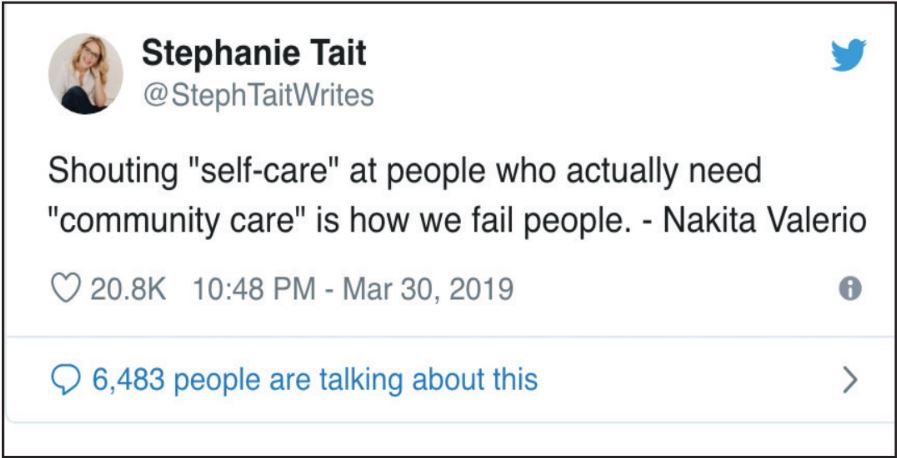 Americans are obsessed with being happy.  In our never-ending quest for happiness, we have become obsessed with the self-care movement. We retreat to revive and we relax to recharge. We treat ourselves because we deserve it. But what if I told you we deserve better? In our individual and self-proclaimed assertions, we are destroying our happiness by destroying our communities.

Angie Jaime, in her recent Vice article, writes about being a Mexican-American in this era of self-care. In an era that touts taking care of yourself, taking the time to attend to your own needs, Jaime finds that her community is under attack by policies that are keen on breaking up families. As she contends with this attack on her own community and considers the history and impact of the self-care-as-politics movement, she highlights the shortcomings of this ubiquitous need to serve the self.

This got me thinking about my own experience as an indigenous woman living in the diaspora. Born in Iraq, my family and I immigrated to the U.S. when I was on the heels of turning 5. Starting kindergarten in the US afforded me the ability to learn and master the English language; a privilege my parents encouraged and also tried to grasp as they worked full-time jobs and took classes at Truman College. A privilege they did not possess, having come here at age 37 and 42.

Like many first-generation Americans, I grew up accompanying my parents to all sorts of serious outings such as medical offices, hospitals, government agencies and report card pickups. The landscape of my youth was equally riddled with medical forms and government agencies as Boxcar Children books and Skip-Its. I was there to interpret and deal with serious issues as a small child. If I didn’t do so, we would have gone without. Yes, we had extended family members to help us, but as a child with a firm grasp on the English language, albeit at times lacking true awareness of the subject matter, I had virtually no other choice. There was a void, a need that I, through my privilege of coming to the US at a young age, filled. So naturally, I did just that.

My self-care, my access to wellness and healthcare, my parent’s very maneuvering of a new country and eventual survival, involved all of us.  While for some, self-care may be a means for wellness, for many, it is a means for survival. We see it in the self-care-as-politics movement today. But there remains a side of the movement that hasn’t been appreciated.

When the political looks different for the indigenous, the marginalized, the vulnerable, when the sense of urgency in a community is paramount, self-care becomes community care.  This type of community-oriented self-care has always existed—in the form of a leveraged privilege to uplift one another. In other words, where I am strong and you are weak, I lift you.  Where I am weak and you are strong, you lift me.

Today, especially today, there is a compelling case for this specific type of self-care at our doors. It is in cages with kids who remain imprisoned at our borders locked in atrocious conditions. It is in the words of Ken Cuccinelli. It is in the slow death of a social security system that leaves a growing number of elderly at risk. Nikita Valerio, whose tweet went viral after the attacks in New Zealand, says it best.

“Shouting ‘self-care’ at people who actually need ‘community care’ is how we fail people.” She would later go on to explain that “community care is a leveraging of individual privilege for another.”

Which brings us to the case of exclusivity; and this makes sense in America, where the $10 billion business of self-care reigns. Exclusivity is such a hot topic that at the Global Wellness Summit this year, industry leaders discussed possible solutions and the need to open up the wellness world to lower-income communities.

This is where the burden of our own consumerism comes into play. How do we get more people from lower incomes to spend more money? It is not just an issue of exclusivity due to economic disparity.  While economic barriers to inclusivity may hold true for this commodified notion of self-care, there is an inherent shortcoming when the burdens of inclusivity are seen through a monetary lens.

When you decorate the ancient tradition of self-care with the trappings of good ol’ rugged individualism, the commodification we see today takes center stage. Our sense of individualism is the cash cow for American consumerism.

This commodification directly leads to exclusion. The implicit, more insidious shortcomings of a commodified version of self-care reveals the true barrier to access —our own rugged individualism. Self-care in America today is a reflection of this. The mirror we hold up to our strong brow, the reflection we see after centuries of pulling ourselves up by our own bootstraps. It is a reflection of how we take care of ourselves and each other.