Something Strange This Way Comes 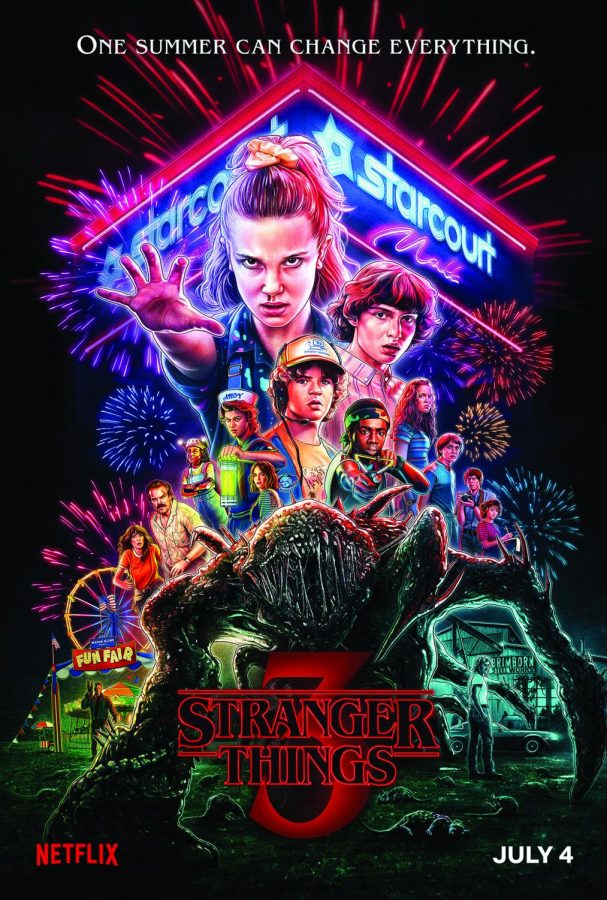 ‘Stranger Things 3’ launched on Netflix over the July 4th weekend and with it comes a huge change in the status quo. The world of Hawkins Indiana grows larger and larger with more characters being introduced and new parts of the world being unveiled. The show maintains its momentum with season 3 even though it still leaves many questions unanswered.

For fans looking for answers to the plans of the Mind Flayer and what exactly is the Upside Down, prepare to be disappointed. For whatever reason the show-runners, the Duffer Brothers, refuse to go into detail what exactly makes the strange things within ‘Stranger Things’ tick. While this does make sense, a show like ‘Stranger Things’ needs its mystery, the lack of teases leads to an alarming thought: Do the show-runners know the answers to their mystery? It wouldn’t be the first time a shows ambitions outpaced its writing, *cough Lost cough*, but only time will tell.

With that said, the highlight of the show is still the Hawkins Gang. Watching the kids grow and develop is as joyful as it is melancholic and it leads to all the emotions. We know that eventually summer and youth has to end but that doesn’t make the journey any less meaningful. In Season 3 we see what happens when puberty dawns in the small town of Hawkins. Relationships change and gone are the days of playing D&D in the basement. Instead, the opposite sex is at the forefront of the kid’s minds, at least until the Mind Flayer rears its ugly head again.

Despite the lack of answers around the Mind Flayer’s motivations, he does make an interesting villain both visually and physically. This time around, the Flayer is infecting the inhabitants of Hawkins ala ‘Invasion of the Body Snatchers’ so anyone and everyone can be a threat to the Hawkins gang. With the introduction of the Star Court mall and the revelation that it is a secret Russian facility, there is a lot happening in the sleepy town of Hawkins and its a lot for our young protagonists to handle. Thankfully the kids aren’t alone as Hopper and Joyce are back on the case and ready to kick the Mind Flayer back to the Upside Down.

Unfortunately, the Mind Flayer isn’t alone either, as the face of its human horde is the charismatic Billy. While Billy hasn’t been the most likable of characters, he is a man of much tragedy. Learning his history, that his abusive father forced Billy’s mother to runaway and leave Billy behind, leads to some heart-wrenching moments. The conclusion to his arc this season was truly moving and a great redemptive moment.

On the note of horrendous deeds, a lot of nonessential characters die in service to the Mind Flayer. It is a bit odd to see our characters killing the Mind Flayer’s thralls, knowing they are not in control of their faculties. No time is really a spent mourning or sympathizing with these character deaths. Innocent people died ya’ll, including a kid, and nobody seems to care. Maybe this will be touched on in the next season. Speaking of season 4, there are many interesting threads left open and there are numerous theories of where the show will head next. The speculation is one of the most enjoyable aspects of the show and the wait for season 4 will be a long one.

Now onto the meat and potatoes of the season, the “death?” of Hopper. Once again, a naughty government is trying to open the gate to the Upside Down and  this allows the Mind Flayer to wreak havoc in our world. Hopper and Joyce blow the Russian machine that is reopening the fissure to our world, but in the process, it appears Hopper was caught up in the explosion. However, we never actually see Hopper’s demise, and as any TV watcher knows, if there is no body, he is not dead. Could Hopper have escaped the explosion by retreating into the Upside Down? Is he the mysterious American, we hear the Russian talk about in the post-credit scene? An interesting note is a musical one. The show reuses the song “Heroes” as the soundtrack to Hopper’s death. The last time “Heroes” was used in on the show was in season one when the police discovered the fake corpse of Will. Could this be a subtle nod that trickery is once again afoot or a red hearing to lead viewers down the rabbit hole? We will have to wait to see.

Overall “Stranger Things 3” is a rewarding and nostalgia-filled trip back to the 80’s. It receives 1985 potatoes on my potato scale.