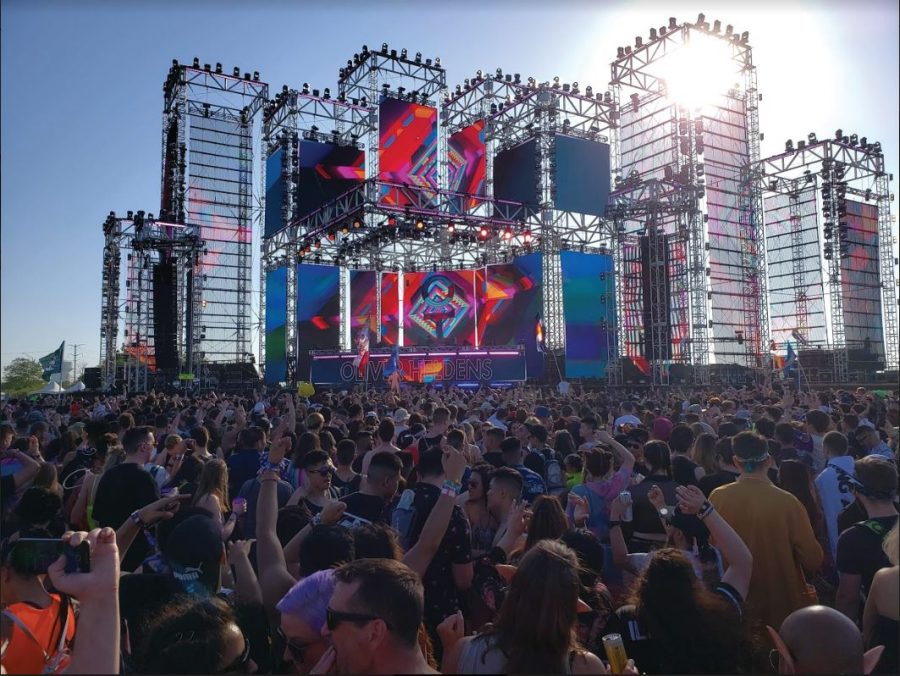 For the first time in Spring Awakening history, the venue was held at Poplar Creek in Hoffman Estates. The walk from the parking garage was long, but it was worth every step. This was my first time attending a music festival. I mostly listen to hip-hop and rap, but the experience of this concert was surreal. As soon as I got past security, a feeling of euphoria surrounded me. It was unlike anything I had ever witnessed in my life.

The event started on Friday June 7 at 1 P.M. My group and I arrived at 4 P.M. My friend purchased my ticket as an early birthday gift and I am so grateful.

There were a total of 5 stages with displays that were out of this world.

The first act we watched was Audien. He was set up at the Solstice stage. His performance was a great appetizer for what was to follow as the sun set. Virtual Riot was set up at the Equinox stage and he also put on a great show. I found myself headbanging along to almost every song. Even when I thought I was tired, I kept going!

It was hot during the day, but the summer breeze hit as time went on. Galantis followed up at the Solstice stage and the duo brought the house down! Every song they played had the crowd in a frenzy. My group and I found ourselves uniting with people we had never met before. We danced like the world was ending the next day. There were three highlights of the day for me.

The first was when Galantis played one of their hit songs, ‘Peanut Butter Jelly.’ The visuals they presented were vibrant and amazing. In my opinion, Galantis was the best performance of the whole weekend.

The most crowded stage was at the Equinox when Illenium performed. My group and I were far back from the center stage, but we still soaked in the emotions and visuals that he displayed as he performed. My second favorite moment of the event is when Illenium had a guitarist on stage as he performed one of his hit songs, ‘Gold.’ The guitarist struct every note in his solos with perfection.

Zedd was performing at the same time as Illenium at the Solstice stage and my group and I was torn between which final performance we wanted to see. We caught the ending of Zedd’s set and it was magnificent. My final favorite moment of the night was when the fireworks display for both Illenium’s and Zedd’s sets went off. It was such a great ending to a perfect day.

I dreaded that I had work for the next two days, but I am so glad that I attended Friday. It was unlike anything I had ever experienced. Everything in the world seemed right as the event went on. No problems and no worries. There are many more artists that perform at Spring Awakening. I encourage you to attend next year and forge your own route throughout the weekend.