In the shoes of Theresa Wirtz 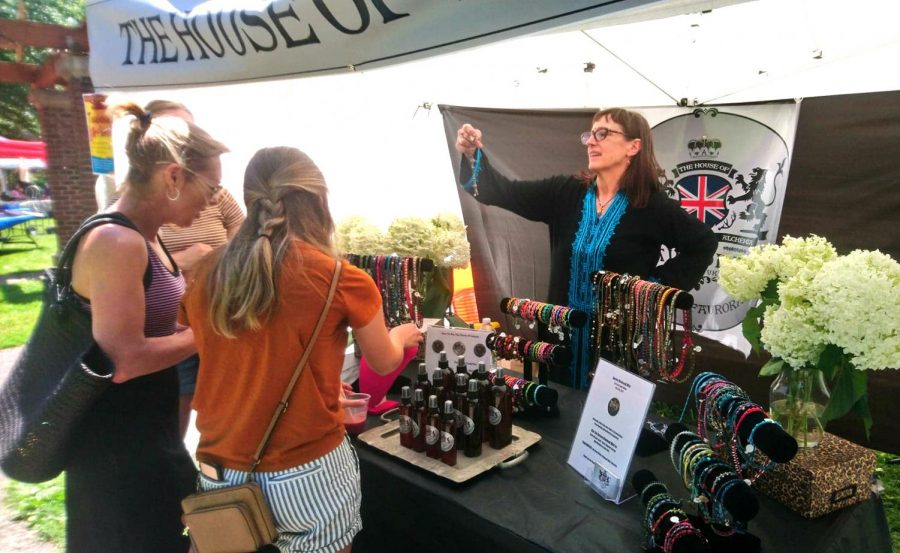 Don’t be so quick to judge others.

Theresa Wirtz is a Minneapolis based artist born in New Orleans, but raised in the United Kingdom by American parents. She designs jewelry from various naturally occurring elements such as gemstones, crystals and metals. She also invents authentic spa products. She operates her craft under the pseudonym Dovima Aurora for her business called The House of Aurora.

Behind the face of an artist is a survivor and a hard-working woman. Theresa Wirtz suffers from Post Traumatic Stress Disorder (PTSD). Post Traumatic Stress Disorder is a mental health condition caused by experiencing or witnessing a terrifying event in which symptoms may include flashbacks, nightmares and severe anxiety, as well as uncontrollable thoughts about the event.

According to her, the main reason for her PTSD is that she was sexually abused from age five to age seventeen by her father who got her pregnant. This lead her into getting an abortion. The abuse didn’t stop there. She was then engaged to a Saudi Prince who also abused and abandoned her.

Wirtz endured homelessness after abandonment where nobody would even care to share food with her or even ask how she ended up there. Many people are quick to judge that homeless people are lazy and don’t want to work, but her success as an artist speaks the opposite of just that. She has also attended Merton College, Oxford where she studied English Literature. She is an extremely hardworking person and that’s what her shoes reflected at the 18th annual Red Hot Art Festival at Stevens Square Park in Minneapolis.

On July 13, Wirtz exhibited her jewelry and spa products at the Red Hot Art Festival. She was spotted wearing a black traditional Indian Kurti outfit with a blue embroidery design complemented with a London-blue topaz necklace. In addition to her style, she wore two nose rings, a bindi, which is a decorative dot traditionally worn by Indian women and red and gold-colored earrings.

Despite her balanced complimenting style, she wore black Birkenstock’s Boston Super Grip leather shoes with colorful socks that created a contrasting effect on her dressing style. It was not that her shoes did not compliment her style, but the faded shine and crease marks on her shoes which set off her style and spoke a different story about her.

Dovima Aurora is a charismatic artist who attracted me and many customers to her exhibition and knows how to speak with her customers including men, women, people of color, LGBTQ and even children. As I stood beside her, I noticed her philanthropic attitude as she gave away her original spa product called Aurora Diamond Mist to children for free with a smile. Aurora Diamond Mist is made with rose water and real diamond dust. She said, diamonds reflect light and help ward off negative energies while rose water keeps the skin hydrated.

Her jewelry designs are unique because they can be wrapped around the wrists and be used as bracelets. They can also be worn as a necklace. In addition to the dual-purpose, she designs them with blind people in mind. She referred to one of her bracelets/necklaces as the “Ho Chi Minh Trail” which was made for blind people to experience different types of texture just like the network of roads built from North Vietnam to South Vietnam that entailed a variety of roads and waterways.

According to her, the products are designed to benefit users from harmful electromagnetic fields created by cell phones, computers, tablets and other electronic technologies that are known to cause cancer, brain tumors, migraines, memory fog and many other medical issues. She said, “the stones and crystals she uses have the properties to deflect these harmful fields.”

Currently, she is a single mother with a beautiful son who is autistic and works tremendously hard in her business to support herself and her son. Despite the tragedy, she greets all her customers with a smile and an intent to heal people through her art. I would encourage people to buy her products because they are the true work of an artist because her products are organic, serves those who are blind or have low vision and protects people from harmful electromagnetic fields. You can visit her website www.thehouseofaurora.com and buy her jewelry and spa products and in her words “let your light shine!”