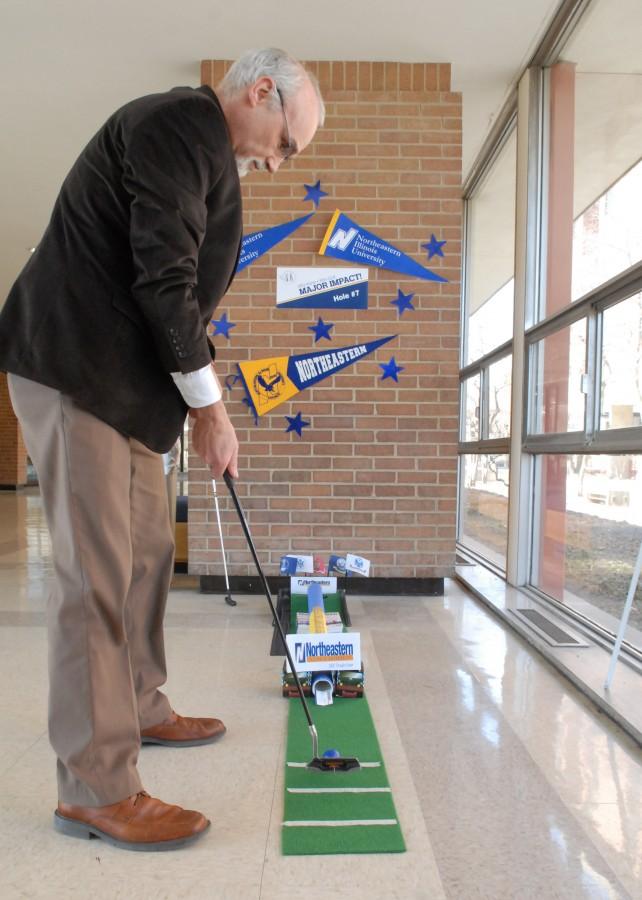 Mini-golf and seven Northeastern Illinois University (NEIU) student and faculty made golf holes were just some of the highlights from the 2nd Annual Chuck Kane mini-golf fund raiser. The Office of Alumni Relations invited the NEIU community to register and participate in the mini golf event. Participants who registered also got a “Mini-Kane” t-shirt and a chance to be entered in a raffle.

Andrew Machado, alumni Coordinator from the Office of Alumni Relations, said that the mini-golf event raised over $500 and had over 80 participants. Out of the seven golf holes, the Physical Education (P.E.) Complex won “best hole” this year. He also said that the funds raised from this event would go towards the Chuck Kane Scholarship.

Charles (Chuck) Kane, an athletic director and golf coach (when NEIU had sports teams) passed away in 1972 due to what Machado described as a “fatal gunshot here on campus.” “Because he taught golf and he was on faculty with the P.E. department, they decided to start a memorial golf outing for him in his honor,” said Machado.

Aside from the mini-golf event that took place this year and last, Machado said that more money is raised for the scholarship at their Chuck Kane golfing outing. The outing includes golfing, a silent auction, raffle, keynote speaker and a dinner at the Highland Park Country Club. This year’s keynote speaker will be former Chicago Bears player, Dan Hampton. “We hope that his visibility will get more people engaged and more people to attend so we can actually raise more scholarships,” said Machado.

“Over the past 41 years, we’ve been able to give out more than 110 scholarships to students here at NEIU,” said Machado. He also expressed that one of the main reasons why the Office of Alumni Relations decided to start the Mini-Kane golfing event was so that it could bring awareness of who Chuck Kane was along with the golfing memorial event and the scholarship itself.

“It was more done as a way to promote and make students more aware of the opportunities that were out there but at the same time feel like they were contributing to a scholarship that they could potentially benefit from,” said Machado.

He also said that the Office of Alumni Relations would like to see more departments and people participating in the events. They are open to recommendations from people on how they can make the events more enjoyable and engaging. Currently ticket and registration prices for the Chuck Kane golfing outing at the Highland Park Country Club on Aug. 19 are still being determined, but Machado said that registration will be open in June.