A spooky, beautiful nightmare: ‘The Pillowman’ 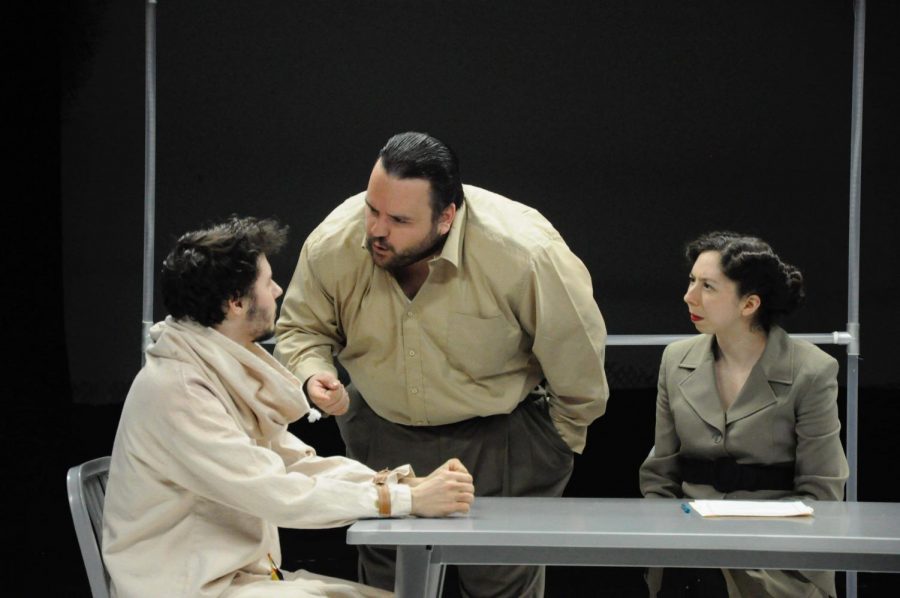 Bright lights. Eardrum shattering loud bangs. Haunting screams and murder. All of that and a bag of purchased Cheez-Its from the vending machine. Martin McDonagh’s “The Pillowman” at NEIU’s Stage Center Theatre follows the dark, twisted story of a man being accused of a string murders that resemble the stories that he writes.

This morbid tale begins as two authoritative figures – Detective Ariel (Chuck Sipps) and Detective Tupolski (Abbey Kruse) – throw a chained and head-bagged Katurian Katurian (Nathan Baltudis) into the prison cell. The two detectives interrogate Katurian with questions that don’t make sense until the end. The three of them go through Katurian’s stories while puppeteers (Angie Velazquez, Lauren Cali and Anthony Pacheco) act out the stories in the background.

Sipps, who has played goofy characters in the past productions of Stage Center such as “High Fidelity,” “Nuevas Voces” and “Offended,” really took on his role as Detective Ariel, the “bad cop.” It was impressive to see Sipps take his character’s persona on and perform it in a believable manner throughout the entirety of the play.

Kruse, who has been in “Nuevas Voces,” “Anonymous,” and most recently the silly character, Patty the Peacock, in the production, “Offended,” written by NEIU’s experimental theatre workshop class and Dan Wirth, also played a serious role. However, her role was originally intended to be a man. The sex and gender-flip of her character worked in the production’s favor as it added that much more “juushh” to the show.

Before the performance, I had doubts of both Sipps and Kruse’s ability to perform the aggressive, raging detectives their characters were meant to be because of their ability to play such goofy characters so well in the past. After the first scene, all doubts vanished. Kruse and Sipps did the dang thing and did it well. It was a work of art and an example of their craftsmanship as thespians.

Turns out Katurian has a brother, Michael (Leonardo Aranda), who has a developmental delay, and his final line in the play will send shivers up your spine. It was no surprise that Aranda could take such a serious topic and perform it with such grace. He is no stranger to the drama of theatre and has been in several Stage Center productions such as “Antigone,” “Anonymous,” “High Fidelity” and “How to Hero.”

However, the supporting characters’ performances were so great, it left the feeling of wanting more, especially from Baltudis. He left behind the scenes of stage managing and took the stage as a performer for the first time. His performance was fine, but left much to be desired. It will be interesting to see what he has in store for the future and hope he continues to perform and hone in on his craft.

The costuming of the performers and intricate design of the puppets was mesmerizing. The stitching of Pillowman himself was encapsulating and it was hard to look away. Director Leslie Hull and Stage Manager Ata Younan did a phenomenal job with the production and should be proud of themselves and their team.

“The Pillowman” has been the best play Stage Center Theatre has put on thus far; a must see.